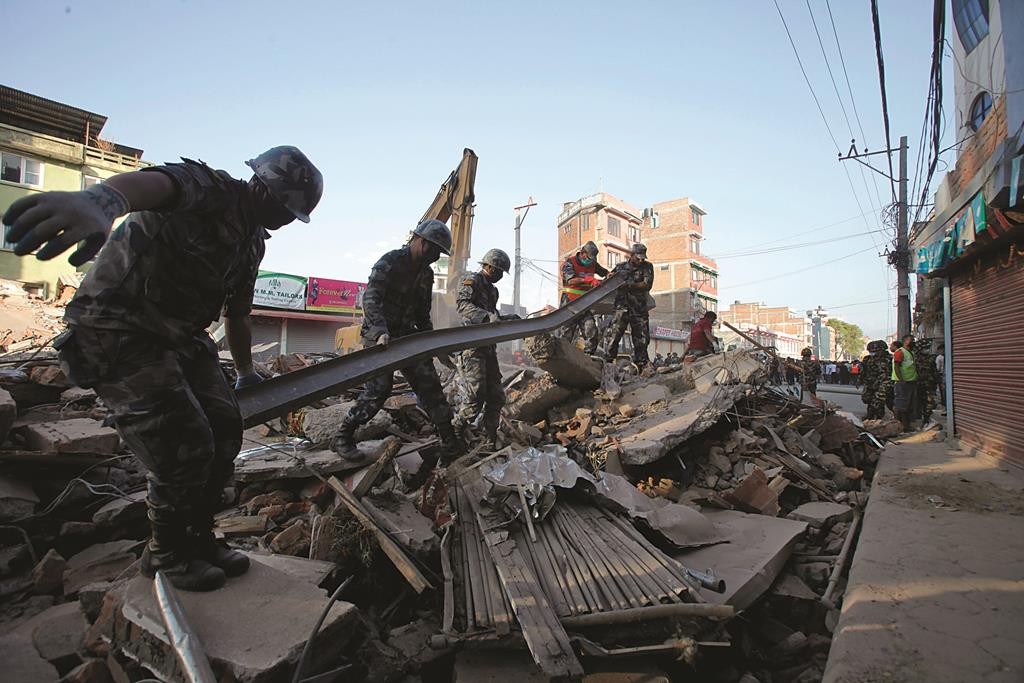 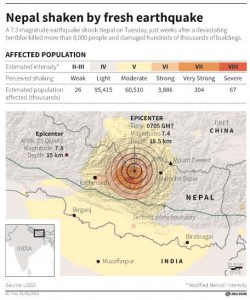 A second powerful earthquake in less than three weeks spread panic in Nepal on Tuesday, bringing down buildings weakened by the first disaster and killing at least 66 people, including 17 in neighboring India and one in Tibet.

Most of the reported fatalities were in villages and towns east of Kathmandu, only just beginning to pick up the pieces from the April 25 quake that left more than 8,000 dead.

The new 7.3-magnitude quake was centered 47 miles east of the capital in a hilly area close to the border with Tibet, according to coordinates provided by the U.S. Geological Survey, and unleashed landslides in Himalayan valleys near Mount Everest.

Villagers who watched their homes collapse said they only survived because they were already living in tents.

Aid workers reported serious damage to some villages in the worst-affected Charikot area and said some people were still trapped under rubble. Witnesses said rocks and mud came crashing down remote hillsides lined with roads and small hamlets.

“We still don’t have a clear view of the scale of the problem,” said Dan Sermand, emergency coordinator at medical NGO Medecins Sans Frontieres (Doctors Without Borders), which surveyed the area by air and saw multiple landslides.

The United Nations has only raised 13 percent of the $423 million it said was needed to help Nepal recover from the April quake, which measured 7.8. Relief workers said they suffered a lack of material before the new quake.

In the town of Sangachowk, residents were outside receiving government food aid when the new quake struck. A family sat on the edge of the road where their house had just fallen down the hill, now just rubble spread over hundreds of feet below.

“We watched it go down slowly, slowly,” said Ashok Parajuli, 30.

In Charikot, where at least 20 bodies were recovered, hotel owner Top Thapa said the quake was at least as strong as last month’s.

“We saw houses falling, collapsing along the ridge,” said Thapa, owner of a resort. He said he saw five or six multi-storey buildings come down.

Politicians dashed for the exit of Nepal’s parliament building in Kathmandu, and office towers swayed as far away as New Delhi. The tremors that began  shortly after midnight Nepali time could be felt in Bangladesh and were followed by a series of powerful aftershocks.