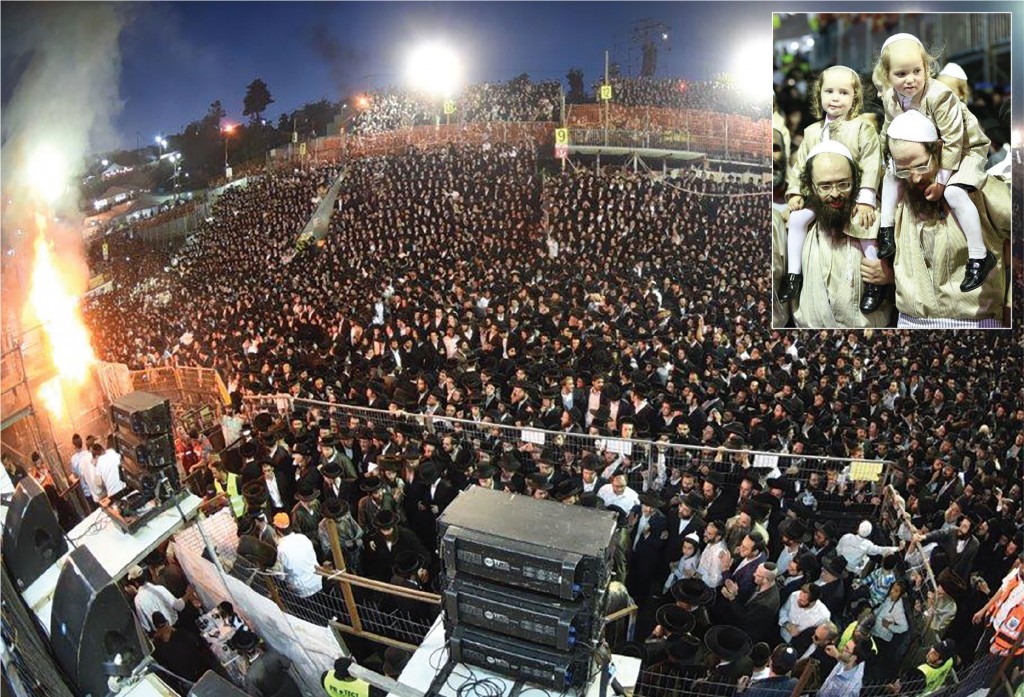 Throughout Wednesday, huge crowds continued to arrive at Meron for the celebration of Lag BaOmer, for the davening, singing, dancing and performing chalakos.

As tens of thousands departed the site during the night and early morning, fresh throngs replaced them in the day, in an event which was remarkably free of the logistical problems of past years.

It was estimated that over half a million Jews attended the Lag BaOmer event in Meron this year, though the exact number could not possibly be known, given the constant inflow and outflow of the hundreds of thousands.

By all official and eyewitness accounts, it was a great success. “The simchah burst all bounds,” Harav Chaim Yaakov Safrin, Rosh Kollel of Kamarana in Bnei Brak, told Hamodia on Thursday evening after returning from Meron.

“It was very special, even more than other years,” he said. “People felt so at home, every kind of Jew was there, from all groups.” Rav Safrin himself spent about seven hours at Meron, leaving in the morning and returning home in the evening.

There were sights worth writing home about on the way to and from Meron, as well. At the Megiddo junction, a major stopping point for travelers, Rav Safrin said there was “a great kiddush Hashem. It was wonderful to see Yidden giving out food and drink to all who needed it, really devoting themselves to helping others purely for the sake of the mitzvah, in such kedushah!”

Yossi Golds of Yerushalayim also told Hamodia that this year’s transportation to and from the event was a pleasant surprise. Unlike previous years, when the overloaded roads and parking areas led to a complete transportation breakdown, this year, he said, “it was a whiz. Everything flowed smoothly. And everyone I talked with said the same thing.”

British-born Esther Lauterberg recounted her day at Meron, describing it as tashlumin, making up Rosh Hashanah and Yom Kippur. “On the Yamim Nora’im,” she said, “davening is a problem. I’m so busy cooking and serving food and taking care of the family that I simply have very little time. And on Yom Kippur, I often find myself too weak to daven that much.

“But on Lag BaOmer at Meron, I have the time all to myself, and I just davened and davened for hours, asking Hashem for all the things we need, for ourselves and Klal Yisrael.”

Dovid, an avreich originally from Baltimore, but a long-time resident in Israel, agreed that the reorganization of transportation was very successful this year, and it made a big difference.

He noted the new parantchos, grandstands, that were installed, sturdy ones, with metal frames that were better able to accommodate the weight of large numbers of people sitting and standing and moving about. The erection of additional giant screens showing the scene at the kever itself in the center, also made it easier for everyone to see, which helped to reduce the pressure on the central area.

Dovid said that “I also made a point of thanking the policemen.” Relations with the police on Lag BaOmer have not always been what one could wish, and he goes out of his way to acknowledge the tough job they have, and thanking them for doing it so well.

“Not that I go up to every officer and say ‘thank-you,’ but where it seemed appropriate, I did. You should have seen the big smiles I got from those guys. They really appreciate a thank-you.”

As every year, dozens of chessed organizations set up tents and booths in the area to provide food, drink and any other supplies or assistance needed.

Magen David Adom treated 92 people on Mount Meron overnight on Wednesday, a miniscule number considering the hundreds of thousands who were there.

Twelve participants were evacuated to a hospital in Tzefas. But, b’chasdei Shamayim, they were only minor injuries and cases of dehydration.