(Reuters) – A row has broken out between Nepal and some international agencies over the handling of aid that poured in to the country after last month’s devastating earthquake, with each side blaming the other for confusion and delays in getting help to victims.

Relief efforts have been slow to reach many people affected by Nepal’s worst disaster in more than 80 years, leaving an unknown number of people stranded, injured and hungry for days.

The 7.8 magnitude quake, which struck 10 days ago, has killed more than 7,500 people and left hundreds of thousands homeless.

Relief material initially piled up at the airport as Nepalese customs officials checked each crate that came in so commercial goods did not slip through.

Senior government officials said customs checks were necessary, because they did not know what was coming into the country.

Supplies included goods that Nepal did not need and many relief workers arrived without proper documents to enter the country, complicating efforts to move the aid effort along, officials said.

“Many donors are sending relief materials without even consulting us about what we need,” said Laxmi Prasad Dhakal, a home ministry official. 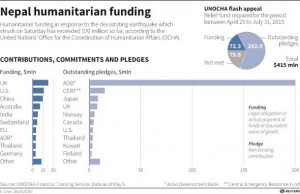 Some rescue workers, for their part, said they were frustrated by what they saw as bureaucratic delays and lack of coordination by the government.

For example, Huijbrechts Marcel, from the Urban Search and Rescue team from the Netherlands, showed up along with teams from four other nations, including the Nepal army, at one house to search for survivors.

“When we arrived here there was absolutely no coordination,” Marcel said.

Frustrated by delays and a lack of coordination, some donors are circumventing the government and sending aid directly through non-governmental organizations for distribution, adding to disagreements, said an aide to Prime Minister Sushil Koirala.

Meetings about earthquake preparedness have been a regular feature in Kathmandu in recent years, and global donors have invested millions of dollars to help Nepal be better prepared for a major seismic event.

Chaos after a disaster of this magnitude is inevitable, experts said, and given that aid groups had estimated a major quake near Kathmandu could kill 100,000 people, they said things could have been worse.

“The challenge here is that you have a factor that you didn’t have in the Philippines [typhoon] or Haiti [earthquake]: eight of the 14 highest peaks in the world are in Nepal,” said Ertharin Cousin, executive director of the United Nations World Food Programme.

“As a result, even though we are operationally ahead, we may not have reached as much of the remote population as we have in other disasters at this point because of geography,” Cousin said on Saturday.

Nepal’s foreign minister, Mahendra Bahadur Pandey, who addressed an international conference in Japan just weeks ago on a possible earthquake in Nepal, said the help from donors was welcome, though not always smooth.

This article appeared in print on page 16 of the May 6th, 2015 edition of Hamodia.