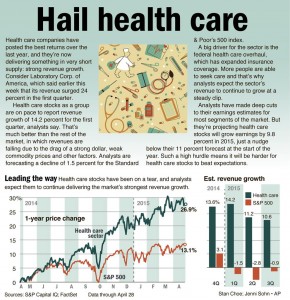 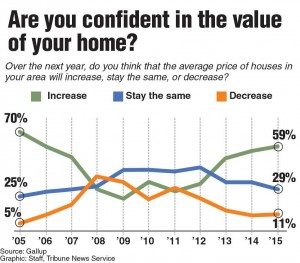 Earnings season is at its busiest this week, with more than 150 companies reporting their results, including Apple, Exxon Mobil, Ford and others. So far, earnings have been coming in better than the gloomy expectations analysts had at the beginning of the month.

But with stocks trading at all-time highs, there’s little momentum for this market to barrel upward, strategists say.

“This market just feels tired to me,” said Dan Morgan, a fund manager at Synovus Trust.

Merck rose $2.88, or 5 percent, to $59.88. While the company’s profits fell 44 percent from a year ago, the results still handily beat analysts’ estimates. Adjusted earnings for the maker of diabetes drugs Januvia and Janumet were 85 cents a share versus the 75 cents expected by analysts. Other health care stocks also rose, including Aetna, drugmaker AbbVie and laboratory equipment maker Waters Corp.

The iPhone and computer maker reported a record quarterly profit of $13.6 billion, but Apple’s outlook was not as rosy as some analysts had predicted. Apple had $193.5 billion in cash on its balance sheet and plans on increasing its dividend and share buyback.

Twitter was the center of some late-day drama when its quarterly results were unexpectedly released before the market closed. Twitter’s revenue missed analysts’ expectations, sending its shares down $9.39, or 18 percent, to $42.27.

Much of the focus this week will be on the Fed’s two-day policy meeting, which ends Wednesday. Policy makers are discussing when the Fed should start raising interest rates again. The Fed opened the door to rate increases after its March meeting, but some recent weak economic data might complicate that picture.

“What we do know is the Fed is going to remain accommodative and keep interest rates low for the foreseeable future,” said David Lefkowitz, senior equity strategy at UBS Wealth Management.

Another weak signal on the U.S. economy came out Tuesday. The Conference Board reported that its index of consumer confidence fell to the lowest level in four months as hiring slowed down.

The Conference Board said its index fell to 95.2 in April from 101.4 in March. That was the lowest since 93.1 in December. The survey’s measure of how respondents assess current economic conditions fell for the third straight month. Their expectations for the future also fell.