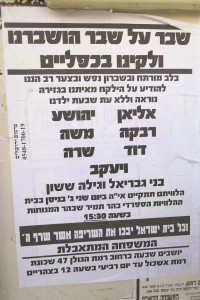 Yerushalayim, as the eternal home of all Jews and the center of Jewish life, has, lo aleinu, witnessed in the last few months several multiple levayos: the four Kedoshim of the Bnei Torah shul massacre, Hy”d, the four Kedoshim of the Paris Hyper Cacher murder, Hy”d, and now the seven young, innocent children, z”l, of the Sassoon family who perished in a tragic fire last Shabbos in their Brooklyn home.

After leaving New York Sunday evening, the aronos arrived in Israel Monday at midday and were driven to Yerushalayim.

The levayah began at the Sephardic chevrah kaddisha building on Har Hamenuchos. As the seven chevrah kaddisha cars arrived, the crowd broke out into cries and heart-rending wails of grief and anguish. At the levayah, many were seen wiping their eyes; others let their tears flow freely.

The first maspid was the bereaved father, Rabbi Gavriel Sassoon, ybl”c, speaking in Hebrew. He began with the passuk in Shir Hashirim (6:2) “Dodi yarad l’gano … lilkot shoshanim — Hashem has gone down to his garden … to gather roses.”

“Our children are the roses, the tzaddikim. Hashem plucks the roses at the exact time, when they are ready and beautiful; if they stay on the bush longer they will wither. Seven beautiful roses, kedoshim and tehorim.”

“On Rosh Chodesh we bring two cows. This is a reference to me and my wife — may she have a refuah sheleimah — and seven pure sheep, my seven pure children,” said the father.

“The moon is renewed every month on Rosh Chodesh. The moon is only a reflection of the sun. We all have our ways in life, but we must remember that we all are just a reflection of the light we receive from Hashem. I always dreamed of the future of my children, my family. I wished to see nachas, a life of Torah and mitzvos, and eventually grandchildren continuing in their ways.

“I recently began learning an amud Gemara every day with my oldest son; his plan was to finish the entire Shas by his wedding — but alas, we were not zocheh.

“When we lived in Israel, people told us, ‘You’re not Israelis’; when we moved back to New York, people there told us, ‘You’re not American…’ Yes, my children were malachim, not people, always seeking more and more. My wife was devoted to the children, with the utmost mesirus nefesh for all their needs, and on Friday night she jumped out of the window to try save her children.”

He continued his dramatic hesped, “They were the tops in their classes, examples of exemplary behavior, in Torah, middos, and everything.

“I hope these korbanos will not be sacrificed for naught. We must all do teshuvah and strengthen our avodas Hashem. We must love all our children. In the eyes of an individual, we lost our children — but now instead of them being my personal children, they are the children of all of Klal Yisrael. We must continue to hold ourselves together in achdus, and that will prevent, chas v’shalom, future korbanos.”

The next maspid was former Sephardic Chief Rabbi of Israel Harav Eliyahu Bakshi Doron: “What can we say? We have to accept the decree from Shamayim. The Gemara asks why earthquakes, disasters, happen. It answers: to break the heart… our hearts are so hard that a tragedy like this is needed to break them! Children without sin! It should inspire us to teshuvah sheleimah.” He concluded with an appeal to daven for the mother of the children, who was reported in critical condition after the fire.

He was followed by Ashkenazi Chief Harav David Lau, who said that every child lost was a flower of Hashem that could have bloomed into something much bigger. We have lost seven outstanding neshamos; even the mother couldn’t be here to comfort us in this terrible time.

“Ribbono shel Olam,” cried out Rav Lau, “You have taken the neshamos of children who have not sinned, lo taamu taam chet; we ask that You send a refuah sheleimah to the mother and the daughter, and that you comfort the family as only Hashem can comfort in such a tragedy.”

The next speaker was Harav Moshe Shapiro. He began by citing the Midrash that says that when a person is niftar, a voice resonates from one end of the world to the other. How much more so when it is seven innocent neshamos at once. What an uproar this has caused!

He quoted the Gemara in Bava Kama that says that when punishment comes to the world, it starts with tzaddikim. The children here were tzaddikim. If these seven korbanos were just the beginning of the punishment, we must do teshuvah and save all of Klal Yisrael from the real punishment, chalilah.

Ashkenazi Chief Rabbi of Yerushalayim Harav Aryeh Stern spoke briefly, mentioning that the children were born and raised in Eretz Yisrael, in Yerushalayim, and returned here — albeit not as quickly as expected and not in the way we anticipated. May their deaths be an atonement for all of Klal Yisrael.

Rabbi Avraham Yosef Leizerson, chairman of Chinuch Atzmai, where the girls learned when they lived in Yerushalayim, expressed the deep pain the school has felt over the last two days. “The school is not the same; the girls are beside themselves,” he said.

“Everyone can still recall the girls from their years in the school, where they were the best students. The principal of the school told me how the mother, may she have a refuah sheleimah, would always call to check up on her girls. They were always exemplary in their learning and in their tznius.

Harav Aharon Harari-Raful, of the kehillah in New York, expressed the agony of the kehillah. “We were aroused by a shofar wake-up blow on Friday night. We have been together with the Sassoon family for some 20 years; they have been with our community and they have improved us, our school, our entire community.

“How will we be able to continue without them?” he cried out. “We need to live them, learn from their examples, and with that we will see comfort.”

The last maspid was Harav Eliyahu Seidel, principal of Neimus HaTorah, where the boys learned in Yerushalayim.

“The Gemara says that if one of the chaburah is niftar, the entire chaburah should worry; here we have not one, but rather three of our students. Oy. I have come here, representing our cheder, to say farewell to Dovid, Yehoshua and Moishy.

“Dovid, I recall when you moved back to America, you told me, ‘We’re not leaving you forever — we shall still return.’ Is this the return you meant?

“We all heard the words of the bereaved father. Such words of gevurah. Reb Gavriel, it is not your personal tzarah, it is the tzarah of Klal Yisrael, v’chol beis Yisrael yivku es hasreifah asher saraf Hashem, it is incumbent on us all to cry. We must learn from their mesirus nefesh to Torah, chinuch and tznius.”

The mekubal Harav Yaakov Adas recited the pesukim of kabalas Ol Malchus Shamayim, and the levayah continued to the Sephardic section of Har Hamenuchos, where all seven children, zichronam livrachah, were buried in a row.

This article appeared in print on page 1 of the March 24th, 2015 edition of Hamodia.