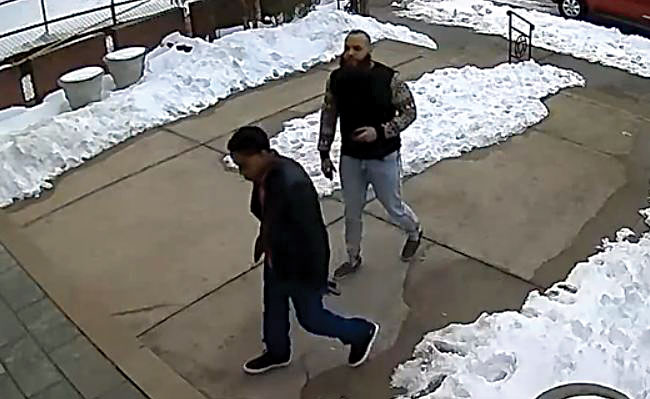 Police are increasing patrols in Flatbush as cameras on Shabbos caught two Middle Eastern- looking men taking pictures and casing shuls, and there are reports of more such activities.

While the two were found late Monday not to be a threat, Josh Mehlman, founder of the Flatbush Jewish Community Coalition, urged in a press release Monday that anyone who sees anything suspicious around shuls or yeshivos to contact police.

This past Shabbos afternoon, two men of Middle Eastern appearance were seen taking videos of the Edmund J. Safra Synagogue, a Sephardic shul on the corner of Ocean Parkway and Avenue R. A surveillance camera video shows a security guard confronting them, and the men then driving off in a blue sedan with expired Delaware license plates.

About an hour later, the two men were again spotted, this time at the nearby Beth Torah shul. One of them remained in the car while the other attempted to enter the shul.

Councilman Chaim Deutsch said late Monday that the two were identified and do not pose a danger.

“Following an investigation into suspicious behavior outside of local synagogues this weekend, the NYPD has determined that the individuals in question were not a threat to our local institutions,” Deutsch said in a statement.

“I’ve spoken with the NYPD and it appears that this matter may be over,” said Assemblyman Dov Hikind.

The activities were captured by surveillance cameras, something local activists consider vital to the swift resolution of the matter.

“This incident,” Mehlman said in a statement, “serves as an important reminder to make sure that all shuls, schools and institutions have continuous video recording, outside and inside facilities, operating at all times.”

Despite large Jewish and Muslim populations living alongside each other for decades, Brooklyn has seen little of the hostilities that have flared up in other cities in Europe. However, recent anti-Semitic attacks in Paris, Crown Heights and Copenhagen have led the NYPD to issue warnings for local Jewish areas to be extra careful.

The incidents garnered extra scutiny amid unconfirmed reports of these same men canvassing two other shuls in the neighborhood.

Councilman David Greenfield tweeted that the scare should provide an impetus for the City Council to pass a bill he proposed last year to have police patrol yeshivos just as they do public schools.

“In an era of lone wolf terrorists,” Sen. Chuck Schumer said when asked by reporters about the incidents, “you can’t be too careful.”