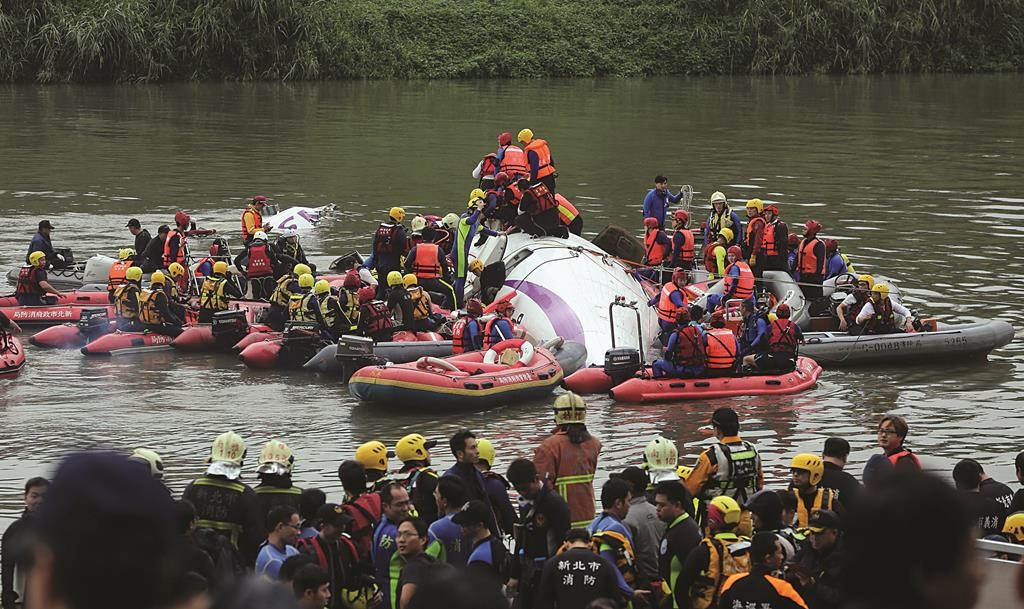 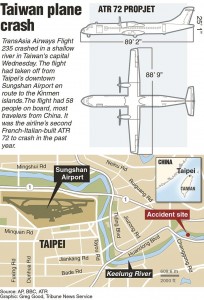 Rescuers used a crane to hoist the fuselage of a wrecked TransAsia Airways plane from a shallow river in Taiwan’s capital late Wednesday as they searched into the night for 17 people missing in a crash that killed at least 26 others.

Flight 235 with 58 people aboard — most of them travelers from China — banked sharply on its side shortly after takeoff from Taipei, clipped a highway bridge and then careened into the Keelung River.

Rescuers in rubber rafts pulled 15 people alive from the wreckage during daylight. After dark, they brought in the crane, and the death toll was expected to rise once crews were able to search through submerged portions of the fuselage, which came to rest a few dozen yards from the shore.

Dramatic video clips apparently taken from cars, showed the ATR 72 propjet as it pivoted onto its side while zooming toward a traffic bridge over the river. In one of them, the plane rapidly fills the frame as its now-vertical wing scrapes over the road, hitting a vehicle before heading into the river.

Speculation cited in local media said the crew may have turned sharply to follow the line of the river to avoid crashing into a high-rise residential area, but Taiwan’s aviation authority said it had no evidence of that.

It was the airline’s second French-Italian-built ATR 72 to crash in the past year. Wednesday’s flight had taken off at 11:53 a.m. from Taipei’s downtown Sungshan Airport en route to the outlying Taiwanese-controlled Kinmen islands. The crew issued the mayday call shortly after takeoff, Taiwanese civil aviation authorities said.

TransAsia director Peter Chen said contact with the plane was lost four minutes after takeoff. He said weather conditions were suitable for flying and the cause of the accident was unknown.

“Actually this aircraft in the accident was the newest model. It hadn’t been used for even a year,” he told a news conference.

Taiwan’s Civil Aeronautics Administration said 26 people were confirmed dead, 15 were rescued with injuries and 17 were still missing. It said two people on the ground were hurt.