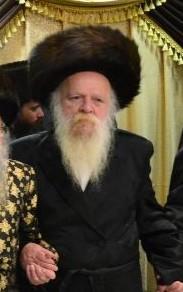 Reb Avraham Dovid was born in Yerushalayim in 1944 to Harav Shlomo and Rebbetzin Chayah Leah Atik. His father was among the most prominent Karliner Chassidim of his time, and enjoyed exceptional closeness to Hagaon Harav Yitzchok Zev Soloveitchik, zt”l, the Brisker Rav. In this unique atmosphere of Torah and avodah, Reb Avraham Dovid grew towards greatness.

During his time studying in Yerushalyim’s historic yeshivah, Eitz Chaim, he distinguished himself for his brilliant mind and tremendous hasmadah. While still a young bachur, Reb Avraham Dovid had already been tested on hundreds of pages of Gemara.

In his years learning in Yeshivas Mir, he won special affection from its Rosh Yeshivah, Hagaon Harav Lazer Yudel Finkel, zt”l, for the long hours that Reb Avraham Dovid spent pouring over his sefarim in the beis medrash. When Yeshivas Brisk first began in Yerushalyim, he was among its first talmidim and merited an especially strong connection to its Rosh Yeshivah, Hagaon Harav Berel Solovetchik,  zt”l. Through his father’s connection, Reb Avraham Dovid also merited to visit and discuss divrei Torah with the Brisker Rav, who enjoyed the bachur’s sharp mind.

He married Leah Gruber, daughter of Harav Fischel Gruber. The couple built a home known for its atmosphere of Torah and yiras Shamayim.

For decades, Reb Avraham Dovid gave the wealth of Torah that he had received from his great teachers, serving first as a maggid shiur in Yeshivas Lifalgus Reuven. He also taught for many years in Yeshivas Tchebin, after which he resided in America for several years acting as the first Rosh Yeshivah of the Satmar Yeshivah of Monsey.

In 1990, Reb Avraham Dovid founded his own yeshivah, Be’er Shlomo, which bears his father’s name. There he was a mechanech par excellence to talmidim who hailed from communities from around the world, filling them with Torah steeped in the spirit of Chassidus.

This article appeared in print on page 6 of the January 30th, 2015 edition of Hamodia.