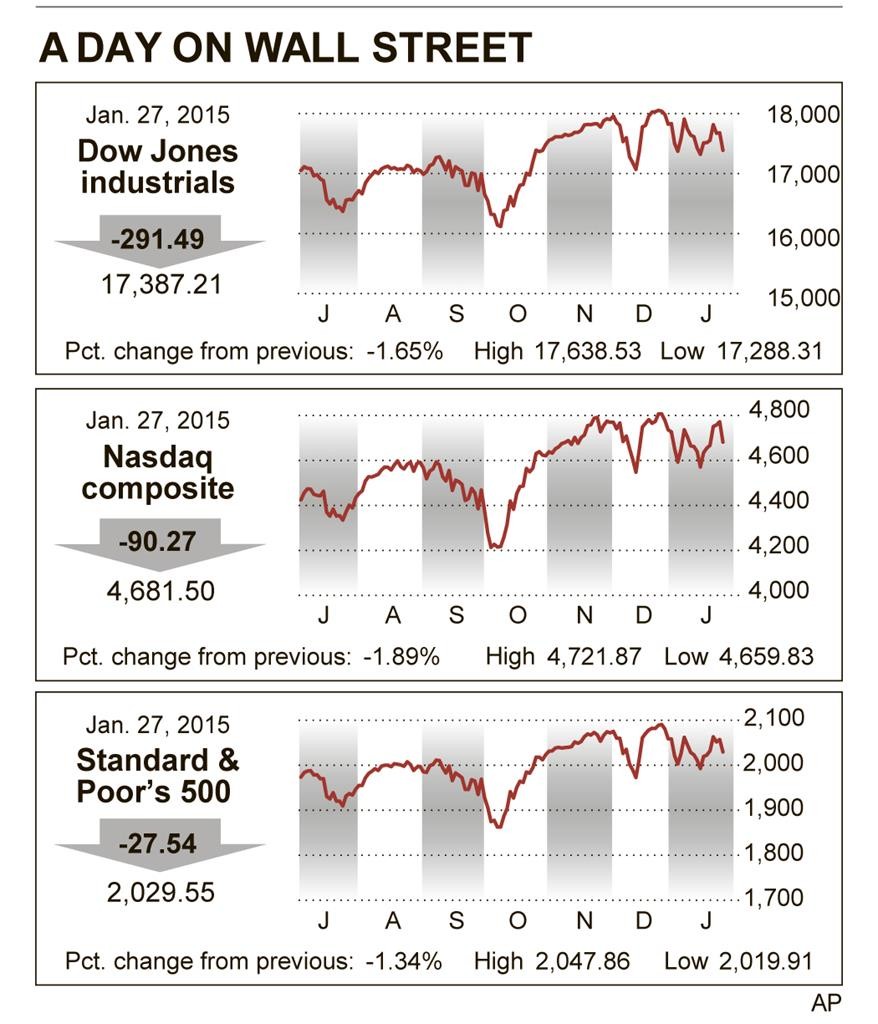 U.S. stocks slumped Tuesday after some of the market’s largest companies reported disappointing earnings, taking investors on a turbulent ride that deepened the losses for the year.

The companies that rattled the market included Microsoft, Caterpillar and Procter & Gamble. Some also forecast weaker results in months ahead.

An unexpected drop in U.S. orders of long-lasting goods also weighed on investors, briefly dragging the Dow Jones industrial average down 390 points early in the day before it pared back some of the losses. It was the biggest one-day decline for the blue-chip index since Jan. 5.

The downbeat company report cards raise concerns about corporate America’s ability to grow profits at a time when many investors are expecting the resurgent U.S. economy to drive earnings should economic growth weaken overseas.

“That theme, ‘Boy, this is the year earnings are going to come back,’ suffered a little bit of a setback,” said Sean Lynch, co-head of global equity strategy at Wells Fargo Investment Institute. “Investors are starting to worry that the stronger dollar and some the impacts of energy aren’t always positive.”

The major stock indexes got off to a rough start early on, each opening sharply lower as investors digested the company earnings news.

A report showing that sales of new U.S. homes accelerated 11.6 percent last month failed to veer the market from its slide.

By midmorning, the Dow had flirted with a drop of nearly 400 points. The market began to pare its losses around midday.

Utility stocks, where investors go when they’re looking for safety, were the only industry group to rise.

Stocks have wavered since the start of the year on signs that growth outside of the U.S. is slowing.

December’s 3.4 percent drop in durable goods orders came about as demand for commercial aircraft declined. It suggests that U.S. companies may be growing wary of economic weakness in Europe and Asia, as well as the strengthening dollar, which can hurt American exports.

Traders remain focused on corporate earnings, which are a key driver of stocks. But there were few bright spots among several of the companies delivering their latest financial results Tuesday.

Even companies that boasted strong quarterly results, such as American Airlines Group, which recorded record quarterly profit, also delivered cautionary notes. The airline said a key revenue figure would decline in the next quarter.

Weakening currencies versus the dollar was a recurrent theme, with Procter & Gamble and Microsoft each citing the stronger dollar as reason for weaker results in months ahead. Caterpillar, Packaging Corp. and Pfizer also issued weak earnings or revenue outlooks.

A stronger dollar can hurt companies that do a large share of their business overseas; sales in other countries translate back into fewer dollars.

“If you look at multi-nationals, they are encountering these problems, but on the whole, I think earnings season will be OK, nothing exceptional or earth-shattering, but they will prove to be satisfactory,” said Peter Cardillo, chief market economist at Rockwell Global Capital.

Tuesday’s big price swoon may have been exaggerated by lower trading volumes than normal.

While the New York Stock Exchange opened at its regular time, many workers in the financial industry probably struggled to get to their offices because the city’s transport links had been shut down in anticipation of a harsh winter storm.

“Volume is not all that heavy,” Cardillo said. “These gyrations might be somewhat extended. The low volume is exaggerating these declines.”

Benchmark U.S. crude rose $1.08 to close at $46.23 a barrel in New York. Brent crude, a benchmark for international oils used by many U.S. refineries, rose $1.44 to close at $49.60 in London. Oil has been mostly falling since June, when it traded above $100, on high supplies and weak growth in demand.