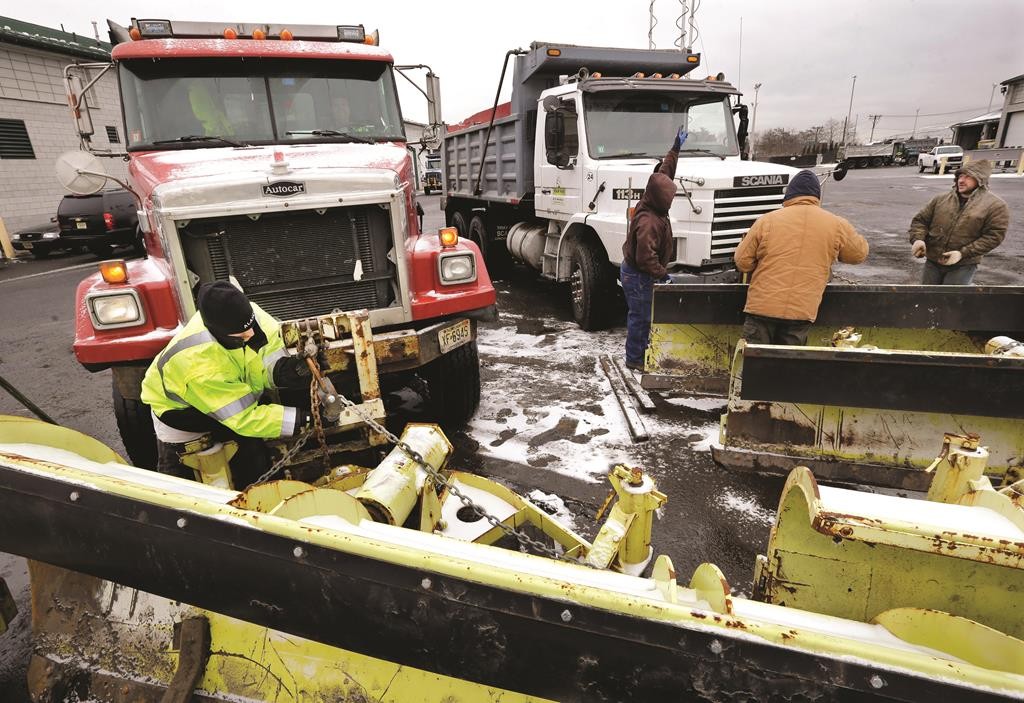 The Philadelphia-to-Boston corridor of more than 35 million people began shutting down and bundling up Monday against a potentially history-making storm that could unload a paralyzing one to three feet of snow.

Transit systems in New York, New Jersey, Connecticut and Massachusetts planned to curtail services, and several governors ordered motorists off roadways by evening in a region that is home to some 50 million people.

The National Weather Service issued a blizzard warning for New York City and surrounding areas between coastal New Jersey and Connecticut, which began 1 p.m. EST on Monday, and worsening overnight.

The weather service warned the approaching system would be a “crippling and potentially historic blizzard,” with many areas along the East Coast expected to be blanketed by 12 inches to 24 inches of snow. The New York City area could be the hardest hit, with lashing winds topping 50 miles per hour and snowfall of three feet or more in some suburbs.

More than 5,000 flights in and out of the Northeast were canceled, and many of them may not take off again until Wednesday. Schools and businesses let out early. And cities mobilized snowplows and salt spreaders to deal with a dangerously windy blast that could instantly make up for what has been a largely snow-free winter in the urban Northeast.

New York Governor Andrew Cuomo declared a state of emergency and deployed National Guard troops to a number of counties in the southern part of the state, as well as New York City.

“It could be a matter of life and death so caution is required,” Cuomo said. “This is not an evening or a night to be out and about.”

“You cannot underestimate this storm. It is not a regular storm,” New York Mayor Bill de Blasio warned in ordering city streets closed to all but emergency vehicles beginning at 11 p.m. “What you are going to see in a few hours is something that hits very hard and very fast.”

New York City subways, which carry 5.5 million riders daily, were scheduled to run on a normal schedule until about 8 p.m., when service will be curtailed to allow subway cars and equipment to be stowed, Cuomo said at a news conference.

New Jersey Governor Chris Christie declared a state of emergency, and sent all but the most essential government workers home on Monday afternoon, telling them not to return until Wednesday at the earliest. New Jersey Transit commuter trains will stop running for at least one day, beginning at 10 p.m. on Monday, he said.

Similarly, Connecticut Gov. Dannel P. Malloy ordered a travel ban on his state’s highways, while officials in other states asked residents to avoid going anywhere unless it is necessary.

“We are anticipating an historic, top-five storm, based on the snowfall,” Massachusetts Governor Charlie Baker told reporters on Monday. The Boston-area transit system will be shut on Tuesday, he said. He warned that coastal parts of the state will likely suffer flooding.

At Boston’s Logan International Airport, the last passenger flight was to leave around 7:00 p.m. EST and airlines planned to remove all planes by the day’s end.

As New York sidewalks turned white, last-minute shoppers grabbed supplies. In a Best Market grocery store in Harlem, about two dozen people stood with filled baskets in a line that stretched the length of the store.

“Usually it’s not like that on a weekday morning,” store manager Dror Dayce said. “Yesterday they cleaned us out.”

Sarah Schaefer, a 31-year-old professor at Columbia University, waited to buy canned food and bread. “We’ve seen instances where they told us to be prepared and it wasn’t so bad,” she said, “and then other instances it was really bad.”

In Brooklyn, lines stretched down the street outside the Park Slope Food Coop, a local favorite. At a nearby grocery, bread and water were almost gone by the morning commute. The biggest snowfall on record in New York City came during the storm of Feb. 11-12, 2006, dropping 26.9 inches, according to the city’s Office of Emergency Management.

Cities along the heavily populated East Coast had snow plows and trucks on standby to dispense road salt.

“This will be a long-duration cleanup and I urge everyone to plan accordingly,” Connecticut’s Gov. Malloy told reporters in Hartford, adding that hundreds of thousands of people could lose power. “If you can leave work early or work from home, please do.”