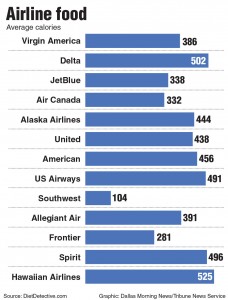 Many jokes have been made about bad airline food.

But a recent report is no laughing matter. The report from DietDetective.com shows that airline food — whether it’s free or not — is not very good for you.

Virgin America is the only carrier “doing a fantastic job” of offering a healthy menu, ranking No. 1 in DietDetective’s annual analysis of airline food served to economy-class passengers. Its healthful meal options include a Salmon Soy Ginger Salad and an Autumn Veggie Wrap.

“The good airlines are getting better and the poor-performing airlines are not doing any improvements,” said DietDetective founder Charles Platkin. This year, his blog analyzed food offered by 13 major airlines based on calories, nutritional value, variety and changes from last year.

Overall, the average number of calories per food item among the airlines this year is 397, up from 360 last year and 388 in 2012. Platkin acknowledged that the increase is probably due to the inclusion of Hawaiian Airlines — the unhealthiest of the bunch — for the first time this year.

Platkin, who is a public health professor at Hunter College and City University of New York, criticized American Airlines and US Airways’ in-flight food options. The two airlines merged in December 2013, but many operations are still separate.

“American, with its merger, has really fallen from grace,” Platkin said. “Its healthy food quality is very low. It seems like they’re not paying attention to this area. … People pay attention to food.”

“American Airlines believes in offering travelers a large range of in-flight food choices to appeal to a variety of dietary and nutritional needs,” said spokeswoman Barbara DeLollis. American and US Airways flights offer several healthy food options, such as hummus and pita chips and a chicken Caesar salad, she said.

Indeed, Platkin thought the healthiest item for travelers on American or US Airways was the hummus snack.

Small differences in food options on American and US Airways flights today will go away later this year when the two airlines’ in-flight menus align, DeLollis said. Travelers may see new food choices similar to items being added to American’s Admirals Club lounges at airports, such as fruit crudites, soups and Greek yogurt, she said.

Southwest Airlines ranked No. 9, with low average calories of 104 in food items. But Platkin said the airline does not have much variety or nutritional value in its choices, with nuts being the best bet for travelers.

Southwest spokesman Brad Hawkins doesn’t dispute that, but noted the carrier still offers free peanuts or pretzels on flights — something most other airlines have stopped doing.

“We offer a standard product across the country that our customers love and is reliable, and part of that is a very simple snack offering that comes with your ticket,” he said. “Throughout our 40 years, we’ve evolved from days we were giving businessmen traveling in Texas a bottle of liquor to peanuts — that’s pretty much our core snack on every flight.”

“Food affects mood, improves the overall health of the passenger and the quality of the travel experience,” Platkin said.

By not improving their healthy options, airlines like American, US Airways and Southwest are missing an opportunity to improve the passenger experience, attract more travelers and increase brand loyalty, he said.

This article appeared in print in the January 7th, 2015 edition of Hamodia.