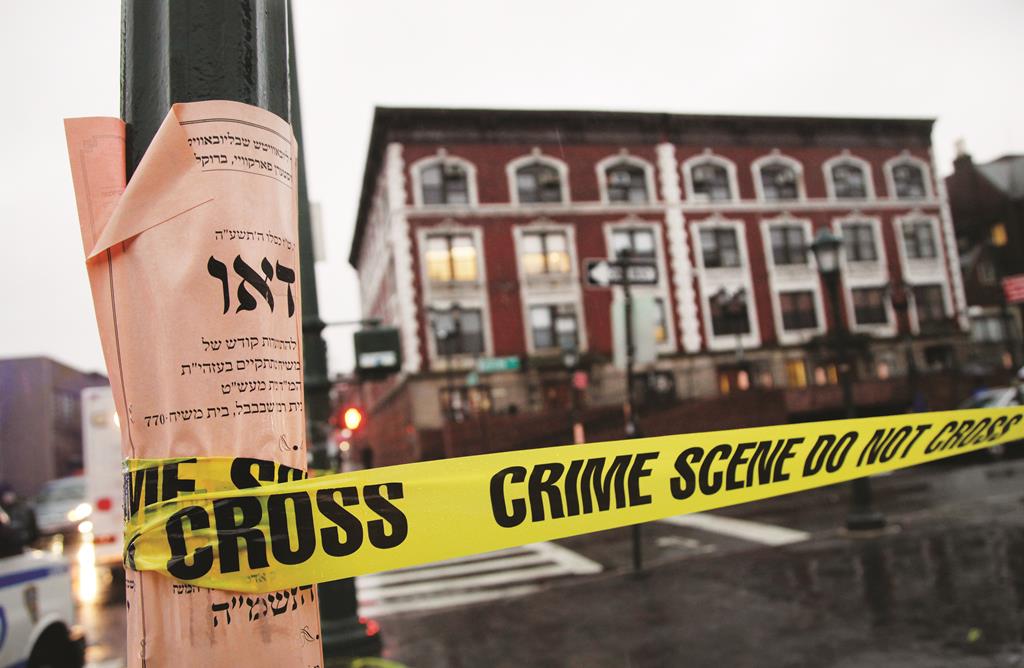 A man with a history of 19 prior arrests dating back to 1982 for a wide variety of crimes in New York City, Nassau County and Delaware, according to law enforcements records, slipped into the main Lubavitcher shul in Crown Heights, known as “770” — which serves as the nerve center of Chabad worldwide — early Tuesday morning and stabbed an Israeli student in the head as he was studying.

Then, as the victim was taken away for emergency surgery, the attacker lunged at police with his knife. After ignoring repeated police demands for him to “drop the knife!” he was killed with a single bullet.

After wounding Levi Yitzchak (ben Reizel) Rosenblat, a 22-year-old Beitar resident, in a side room, Calvin Peters, 49, entered the main shul, where the confrontation with police took place.

Rosenblat, who was able to sit up and talk after the incident, was rushed into emergency surgery at Kings County Hospital and was listed at press time in critical but stable condition.

Police said the stabbing was not believed to be connected to terrorism. But it shook the Jewish community, still reeling over the Har Nof shul attack by two Palestinian cousins last month that left five people dead, Hy”d, and four seriously wounded.

“We are monitoring this case very closely and conducting a thorough investigation,” de Blasio said, adding that he will visit Crown Heights in the coming days “to hear concerns and reassure people of the city’s commitment to all of our safety and security.”

At least one witness said he heard Peters repeatedly saying, “Kill the Jews!” but others who were present said they could not recall it. Police were still interviewing witnesses but quoted Peters as saying instead, “I’m going to kill all of you.”

Bratton said in a statement that the Hate Crime Task Force is part of the investigation. However, the case is being treated currently as that of a mentally ill person out on a rampage and not as a possible bias crime.

“Preliminary reports suggest the assailant in this case suffered from mental health issues,” de Blasio said. “We as a society must do more for those who struggle with these challenges.”

Peters had come into the building earlier Monday and was ushered out, then returned after midnight and asked: “Do you have any books in English?” before he was escorted out again, police said. The building is open 24 hours a day.

But in the wake of the attack came concern by local Jewish groups over what the city is doing to better secure New York City’s shuls.

“Following on the heels of the brutal terror attack in a Jerusalem synagogue the other week,” said Councilman David Greenfield, a Brooklyn Democrat, “I was unnerved to learn about the brutal stabbing of a Jewish student last night in Brooklyn at Chabad’s world headquarters.”

Greenfield thanks the responding officers who “bravely shot the perpetrator and protected the lives of others in the synagogue.”

“The entire Jewish community is impacted by this cruel and senseless attack,” Hikind said. “How can we help but be reminded of the recent horrible tragedy in Har Nof that left five innocent people dead?”

Police boosted security around shuls following the Yerushalayim attack, although 770 has had a 24-hour police watch for the past decade.

Comptroller Scott Stringer called the attack “a horrific act of violence … of hatred and bigotry,” while adding that it “highlights the need to increase support for people with mental illness.”

Josh Mehlman, chairman of the Flatbush Jewish Community Coalition, said the stabbing “serves as a stark and scary reminder of the urgent need for enhanced security for religious institutions.”

Devorah Halberstam, whose son Ari was killed by a Lebanese terrorist in a 1994 shooting on the Brooklyn Bridge, told the Associated Press that there is nothing more sacred in the community than a shul.

“This is where we feel the most safe, when our kids leave the house and we know they went to shul either to pray or to learn,” she said. “To know that something like that has happened and infiltrated within our own community is so troubling.”

A jerky video clip of the final confrontation showed Peters in a waist-length jacket and hat with a knife in his right hand, surrounded by officers with drawn weapons. Jewish students who had been learning there appeared to be trying to defuse the situation, urging Peters to calm down and asking officers not to shoot him.

Peters eventually put the knife down at an officer’s urging and stepped away, but quickly picked it up again as the officer approached him, apparently to arrest him.

Officers yelled at him repeatedly to drop the weapon as Peters moved around, and a single gunshot could be heard. Police said Peters had lunged at the officer with the four-inch blade.

Mindful of the protests swirling around the city since the grand jury acquittal of a white police officer in the death of a black Staten Island man last week, Bratton said Tuesday that the shooting of Peters “looks like it was justified” and “while unfortunate, may have been unavoidable.”

The community’s elected officials praised the response by police, saying that their taking down the assailant saved the lives of many others.

“I have nothing but high praise for the officers of the New York Police Department for responding swiftly and apprehending the suspect in this horrific crime,” said state Sen. Simcha Felder.

Councilman Chaim Deutsch of Midwood praised the NYPD for responding “with professionalism and tact. NYPD officers face extremely dangerous and frightening conditions daily, and their bravery and courage in protecting us is admirable.”

In his capacity as chairman of the City Council’s Jewish Caucus, Mark Levine of Washington Heights said he was “grateful” officers intervened “quickly and professionally to prevent what could have been a far more deadly incident.”

Peters had been arrested 19 times since 1982 and most recently in 2006, and had a documented history of mental illness. Attorney Jeffrey A. St. Clair, appearing at the Peters family’s front door in Valley Stream, on Long Island, described him as bipolar. St. Clair said the family had no warning of an outburst.

“Calvin Peters was a loving and devoted father,” he said. “And the family is quite frankly shocked and disappointed at what happened.”

Next-door neighbor Lorraine McCartney called Peters “a very nice man” who had attended parties in her backyard. “I would never believe that of him. Never,   ” she said.