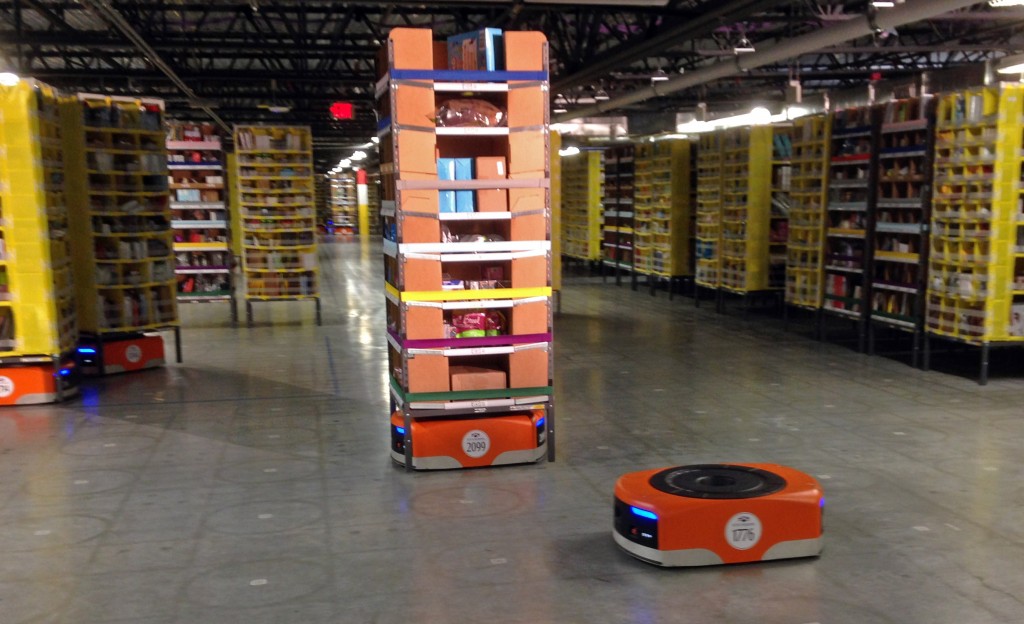 A year ago, Amazon.com workers like 34-year-old Rejinaldo Rosales hiked miles of aisles each shift to “pick” each item a customer ordered and prepare it for shipping.

Now, the e-commerce giant boasts that it has boosted efficiency – and given workers’ legs a break – by deploying more than 15,000 wheeled robots to crisscross the floors of its biggest warehouses and deliver stacks of toys, books and other products to employees.

“We pick two to three times faster than we used to,” Rosales said during a short break from sorting merchandise into bins at Amazon’s massive distribution center in Tracy, California, about 60 miles east of San Francisco. “It’s made the job a lot easier.”

Amazon.com Inc., which faced its single-biggest day of online shopping on Monday, has invested heavily this year in upgrading and expanding its distribution network, adding new technology, opening more shipping centers and hiring 80,000 seasonal workers to meet the coming onslaught of orders. Amazon says it processed orders for 36.8 million items on the Monday after Thanksgiving last year, and it’s expecting “Cyber Monday” to be even busier this year.

CEO Jeff Bezos vows to one day deliver packages by drone, but that technology isn’t ready yet. Even so, Amazon doesn’t want a repeat of last year, when some customers were disappointed by late deliveries attributed to Midwestern ice storms and last-minute shipping snarls at both UPS and FedEx. Meanwhile, the company is facing tough competition from rivals like Google and eBay, and traditional retailers are offering more online services.

Amazon has forecast revenue of $27.3 billion to $30.3 billion for the year-end quarter, up 18 percent from last year but less than Wall Street had expected. However, Amazon has invested billions of dollars in its shipping network and its reliability is a big selling point to customers, Piper Jaffray investment analyst Gene Munster wrote in a note to clients Friday. He thinks Amazon’s forecast is conservative.

The Seattle-based company now has 109 shipping centers around the globe. The Tracy facility is one of 10 in which Amazon has deployed the robots, using technology acquired when the company bought robot-maker Kiva Systems Inc. in 2012, said Dave Clark, Amazon’s senior vice president for operations, who gave reporters a tour on Sunday.

More than 1,500 full-time employees work at the Tracy center, which has 1.2 million square feet of space – the equivalent of 28 football fields. They are joined by about 3,000 robots, gliding swiftly and quietly around the warehouse. The robots navigate by scanning coded stickers on the floor, following digital commands that are beamed wirelessly from a central computer.

Each of the squat orange machines can slide under and then lift a stack of shelves that’s four feet wide and holds up to 750 pounds of merchandise. The system uses bar codes to track which items are on each shelf, so a robot can fetch the right shelves for each worker as orders come in.

Because the robots travel underneath, the shelves can be stacked closely together, which means the warehouse can hold more goods, Clark said. The Tracy center now holds about 20 million items, representing 3.5 million different products, from bottles of gourmet steak sauce to high-end audio headsets, books and video games. Clark said it can ship 700,000 items in a day, but will hold more and ship more by next year.

The robots will cut the Tracy center’s operating costs by 20 percent, Clark said. But he was quick to assert they won’t eliminate jobs.

“Our focus is all about building automation that helps people do their jobs better,” he said, adding that workers are needed for more complex tasks such as shelving, packing and checking for damaged items. The system takes the complexity of different tasks into account, rather than forcing employees to work at an inhuman pace, Clark added.

Rosales agrees. Though he works rapidly, he said the robots “actually adjust to your speed. If you’re picking slower, they slow down.”