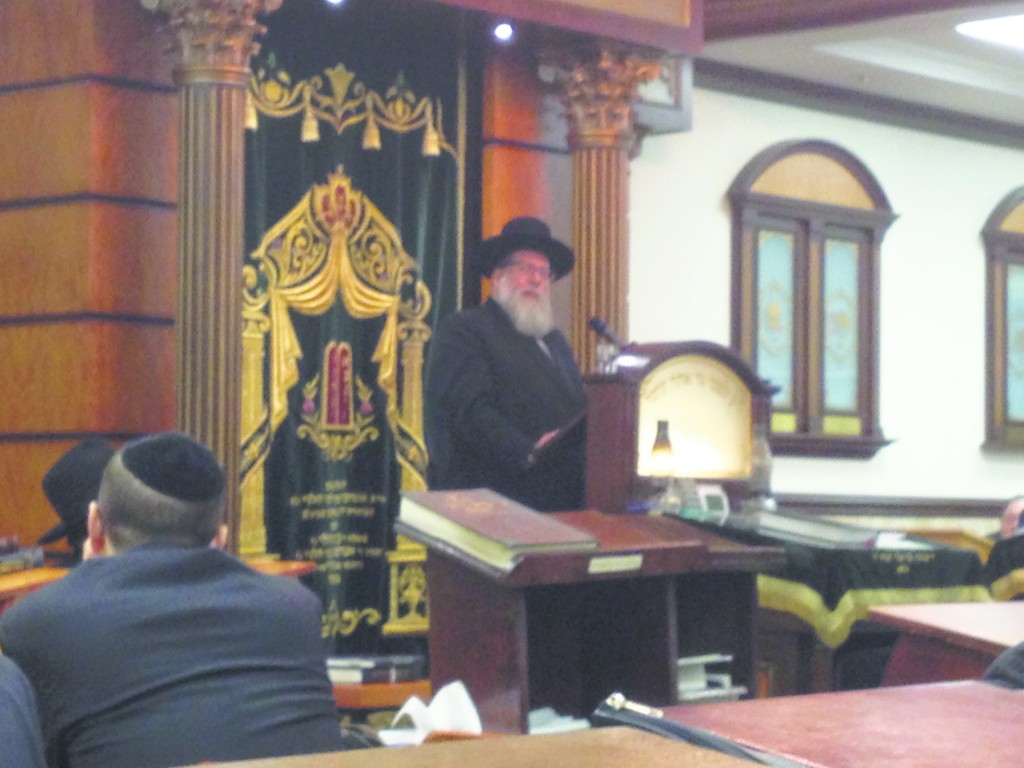 The Imperative of Chesed

In response to the barbaric slaughter of Yidden in Eretz Yisrael, the latest attack taking the lives of four talmidei chachamim while davening Shacharis in Hof Nof, and the overall dire matzav in the holy land, a kinus hisorerus took place Tuesday evening, 26 Cheshvan/Nov. 19 in Flatbush. Organized in conjunction with Agudath Israel of America, the gathering was held at Agudath Israel Bais Binyomin.

Rabbi Zwiebel cited Parashas Mattos in which it states that prior to Bnei Yisrael’s entry to Eretz Yisrael to conquer the land, Bnei Gad and Bnei Reuven revealed their intention to stay behind on the other side of the Yarden River since that land would benefit their livestock. Moshe Rabbeinu responded, “Haacheichem yavo’u lamilchamah v’atem teishvu poh — Shall your brothers go out to war while you settle here? (Bamidbar 32:6).”

Harav Yonason Eibshutz, zt”l, based on Rashi’s comment on Parashas Vayeishiv (Vayeishiv Yaakov — Yaakov sought to dwell in tranquility), explains that teishvu implies a feeling of being at rest. Therefore, Moshe Rabbeinu is astonished that, according to his understanding, while their brethren are at war, these Shevatim seem ready to remain behind in chutz laaretz in a state of tranquility.

The message is that when our brethren in Eretz Yisrael are in a state of tzaar, as when they areat war — far be it from us here in the United States to think that we can feel calm and simply go on with our daily lives:  “Shalom alai nafshi — I am at peace with myself.” Such thinking is untenable.

We should strengthen ourselves in Torah and tefillah and come to an understanding of what a great zechus it is to don ourselves with tallis and tefillin each morning, Rabbi Zwiebel said. He concluded with the wish that the assembled be zocheh to glean the hisorerus the Ribbono shel Olam desires that we glean.

Harav Lieff said that the images of the slain kedoshim, adorned with tallis and tefillin, slaughtered like cattle, brings back memories of the massacre at the Chevron Yeshivah in 1929 when lomdei Torah perished al kiddush Hashem. At one time our enemies used automatic firearms to carry out their nefarious plans. Such weapons produce sounds such that people are alerted to stay away and limits the extent of the tragedy. But the rotzchim have started to use vehicles, hammers, knives, kitchen utensils, and their use can lead potential victims to enter a terror scene unwittingly. Our powerlessness in the face of such a scenario, R”l, underscores that einlanual milehisha’ein, elaalAvinuShe’bashamayim — We have no one upon whom to rely except on our Father in Haven.”

We seek a daas Torah perspective on the situation and the Anshei Knesses Hagedolah who authored our Shemoneh Esrei offer one in the nusach hatefillah, said Harav Lieff. The last brachah, “Sim Shalom,” embraces what we need more than everything — shalom, for Klal Yisrael and people everywhere. There is a misconception that when there is no malice, there is peace, said Harav Lieff. Yet we are mispallel at the end of the Amidah, “Oseh shalom bimromav, Hu ya’aseh shalom aleinu v’al kol Yisrael —  May the One who makes peace in the heavens above, may He make peace among us and upon all of Israel. This means that shalom is a briah, a creation in and of itself.

We entreat Hashem, said Harav Lieff, to bless us with this gift of shalom — kulanu k’echad b’or Panechah — all of us as one,indicating a prerequisite of unity. Further, we state V’or Panechah nasata lanu Hashem Elokeinu Toras chaim v’ahavas chessed utz’dakah uvrachah v’rachamim — with the light of Your countenance You have us given us the Torah of life and a love of kindness, righteousness, blessing, compassion. The key to our response to these events is to increase in Torah and chessed, and to exhibit rachmanus to our family members and to those around us, and to foster a love for chessed, not merely to engage in it as an obligation to carry out.

Harav Yecheskel Levenstein, zt”l, offered a mashal to illustrate how one should value chessed. If one found a tremendous sum of money in the street with a sign stating, “This is hefker,” one would likely take as much as he could. Similarly, one should seek to do as much chesed as possible.

In the Former Soviet Union tens of thousands gather in Moscow for the annual May Day parade. They celebrate the defeat of Nazi Germany in 1945, which formally ended the Second World War. This took place decades ago.The great Russian military force of that time is a closed chapter. Why are they still celebrating?

The answer is, said the Rav, thatthe nations live by the sword — “al charbecha tichyeh.” They don’t need the excuse of warfare to kill innocent, pure people. That is their koach. Our response is Hakol kol Yaakov v’hayedayim yedei Esav — We have to strengthen the voice of Torah and tefillah to counter the venomousness of our enemies.

Our reaction to their barbarism, which they commit with a passion and fervor, is to daven with a bren and with feeling — for the matzav in Eretz Yisrael and for all the other tzaros that face us.

We cannot go around fearful, said Harav Lieff, though certainly we need to make hishtadlus and be vigilant. The police department is taking extra precautions in this regard. Our response should be to come closer to Hashem by increasing in Torah and chessed, and have much more rachamanus on each other.

These divrei chizuk were followed by fervent recitation of pirkei Tehillim.