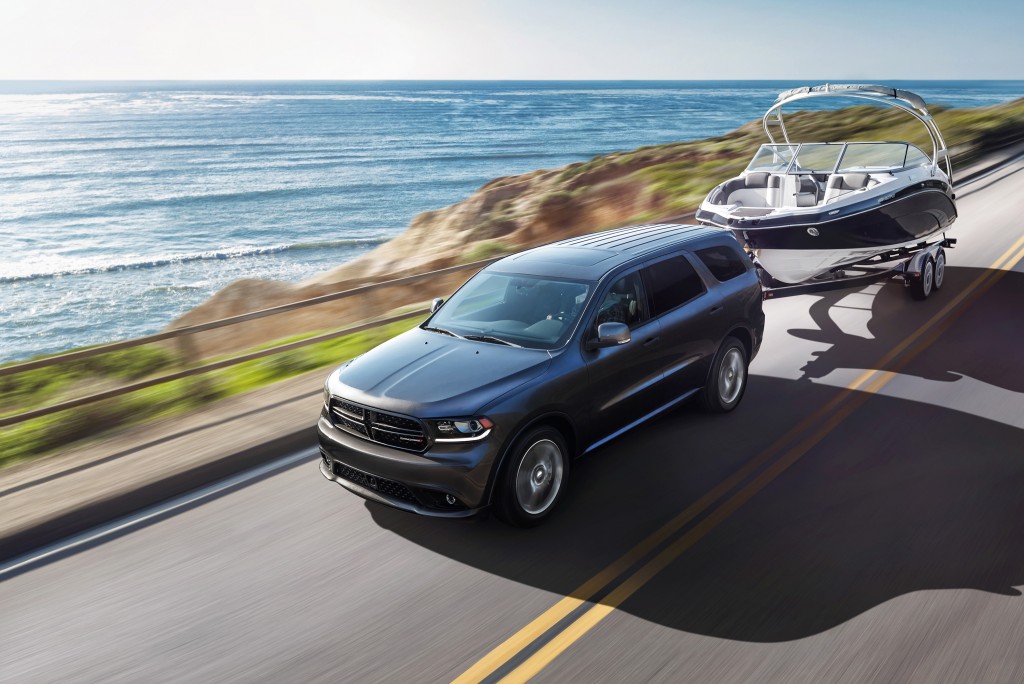 Admittedly, the Dodge Durango was a head turner for me since it hit the streets as a 1998 model. The wife and kids soon got used to my familiar “Durango alert” whenever I caught one at an intersection or in the rear-view mirror.

The folks at Chrysler blew the redesign (2003) when they bulked it up, put a Mack truck face on it and turned it into a genuine full-size SUV. But, when full-size SUV sales tapered off, the third-gen Durango returned to a sleeker design that brought back memories of the classic.

For this year, Durango is sharper-looking than ever, with its rugged front end and squinty, mischievous-looking headlamps and all-new “racetrack” tail lights that span the rear like its cousin, the Charger.

“My wife fell head over heels for the styling …” said one guy on an online forum.

“Tons of looks by people trying to figure out what it is,” said another.

While driving the top-of-the-line Citadel AWD, I soon realized there’s far more to the Durango this year than its stunning looks. A new 8-speed transmission offers up smooth, decisive shifts and improves a tad on mileage. An already-elegant interior has been updated and now includes an optional 8.4-inch touchscreen.

Durango remains an odd one to classify: It is smaller and better-handling than the big guys like the Ford Expedition and Chevy Tahoe, yet bigger and more of a brute than the front-wheel-drive midsizers like the Toyota Highlander and Ford Explorer.

Riding on the stretched unit-body platform of the Jeep Grand Cherokee, Durango is well-behaved on the road. It has light steering feel, which adds to the ease of parking but subtracts on road feel at higher speeds.

Durango offers both V-6 and V-8 engines, though the all-wheel-drive system is only available on the V-6. That 3.6-liter puts out 290 horses and 260 pound-feet of torque. While low-end acceleration won’t cramp any necks, it delivers plenty of passing power. It’s fine for most families who are hauling kids, sports equipment and luggage.

But leave the heavy lifting to the 5.7-liter V-8, which corrals 390 horses and a whopping 390 pound-feet of torque. This is for towing houses, or at least the heavy trailers — up to 7,400 pounds — and is far more than most rivals.

And here’s good news: New for 2014 is an Eco mode that lowers the throttle calibration and offers earlier upshifts to conserve a few drops of fuel. Plus, a cylinder-deactivation system on the V-8 idles 4 cylinders when they’re not needed.

Braking is firm and responsive, and highway rides are comfortable —especially in the Citadel, with its less-sporty suspension.

Inside, materials are top-flight and have a quality feel. There’s an all-new instrument panel, and the larger touchscreen display is bright and attractive — plus, it’s one of the most-user-friendly systems in the industry.

Still, the real attraction for many families will be the dual entertainment screens in the second row.

Front seats are roomy and comfortable, as are the optional second-row captain’s chairs. Two adults managed to scoot back to the third-row seats several times without complaint. It is made easier with Durango’s fold-and-tumble captain’s chairs.

Still, adults will not want to ride for long back there — as is the case with most third-row SUVs.

As big as Durango feels and looks, it does not offer a huge amount of cargo space when compared to some competitors. With second and third rows folded down, Durango can cart 84.5 cubic feet of stuff.

Every Durango gets ABS, traction and stability control, plus full-length side-curtain air bags. Rear-view camera and parking sensors are standard on all but the base trim. A blind-spot warning system is available.

And a tech grouping includes a forward-collision warning and mitigation system that will apply brakes to avoid an accident if you don’t.

And then there’s the Citadel, with even more luxuries like auto wipers, 8-way power seats and navigation. The rear entertainment system, with dual screens and HDMI input, are part of an optional technology group that also has safety features.

If you’re seeking a fuel-efficient, economical crossover, you’ll want to look elsewhere. But if you want seating for seven and ironman towing capacity, it’s hard to beat the Durango. And, with its eye-catching aggressive looks, don’t be surprised at the next intersection to hear someone yell out their window, “Durango alert!”