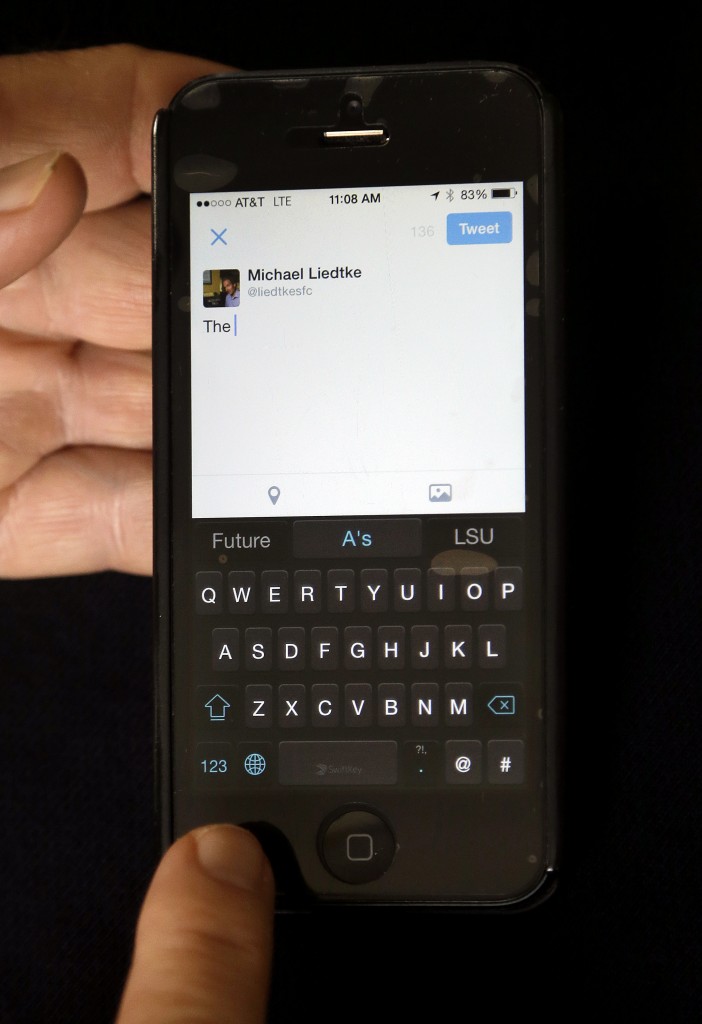 I never would have considered writing this review on my iPhone if I hadn’t upgraded to Apple’s new operating system, iOS 8.

With the free upgrade, typing on the iPhone’s touch keyboard doesn’t seems as tedious, cumbersome or infuriating as it did before, when a rather dim-witted “auto-correct” system would slip in words that made people look illiterate or, even worse, inappropriate.

The new “QuickType” keyboard is smart enough to anticipate what you’re typing, such as the next logical word in a phrase. You’re constantly shown three word choices in a gray ribbon above the keyboard. When the right word appears, tapping on it automatically inserts it into the text to save keystrokes. I just avoided 15 by tapping on “automatically” and “keystrokes” when they popped up.

If that’s not slick enough, iPhone and iPad users can choose one from an outside party, similar to what Google’s Android operating system has allowed for years. A few are free, while others cost 99 cents to $4.99.

Switching to a different keyboard just requires pressing on a small globe near the space bar, a tool that allowed me to use each one as I wrote about them for this review. I am focusing on the keyboards that I liked best, though I also experimented with several others, including Flesky (99 cents) and Textexpander ($4.99).

This keyboard strives to predict what words are being typed so you don’t have to spend as much time pecking on your device. For the most part, QuickType fulfills that mission. It does a good job of anticipating common words like “the” and “you,” but also understands when to list words like “immolation.” It also had no problem automatically filling in email addresses when I was in my Gmail app. Tasks like that are common ones, but the keyboards from outside parties couldn’t consistently do them in my tests.

The most annoying aspect about QuickType and all the other keyboards is their inability to anticipate punctuation marks. When I type, “As Mark Twain once said,” I have to go back to add a comma after tapping on “said.” If these keyboards were really smart, they would start to include words with punctuation among the choices.

This seemed to be the most intelligent of the keyboards that I tried. As promised, SwiftKey quickly picked up on my writing style and frequently used words.

SwiftKey is supposed to pay attention to each user’s writing style to become ever-more clairvoyant as time goes on.

The main appeal of this keyboard is a feature that inspired its name: the ability to enter text by swiping across the keyboard instead of tapping on keys.

This is especially useful for common punctuation. For instance, that comma and space were created with a swipe from the comma to the space bar. And how about this? That question mark was entered with a quick swipe down from the “m” key to the space bar.

You’re also supposed to be able to enter entire words by swiping around the keyboard, but I wasn’t adroit enough to perfect the technique.

At first, what you’re typing looks like gibberish if you just look at the body of the text. But the keyboard grew on me once I realized I was supposed to focus on the ribbon above the keyboard, where six different word choices are constantly displayed. If you learn to focus on that ribbon, the word you want usually appears and can be inserted into the text with a quick tap.

Minuum’s name refers to its ability to be shrunk down to an ultra-small mode with a downward swipe. I had no use for this option on an iPhone, but it might be handy at times on the iPad’s larger screen.

Bottom line: Apple’s new keyboard is so much smarter than its predecessor that most longtime iPhone and iPad users probably will be quite happy just to use it. I recommend checking out SwiftKey or Swype if you are looking for an even more intelligent type.