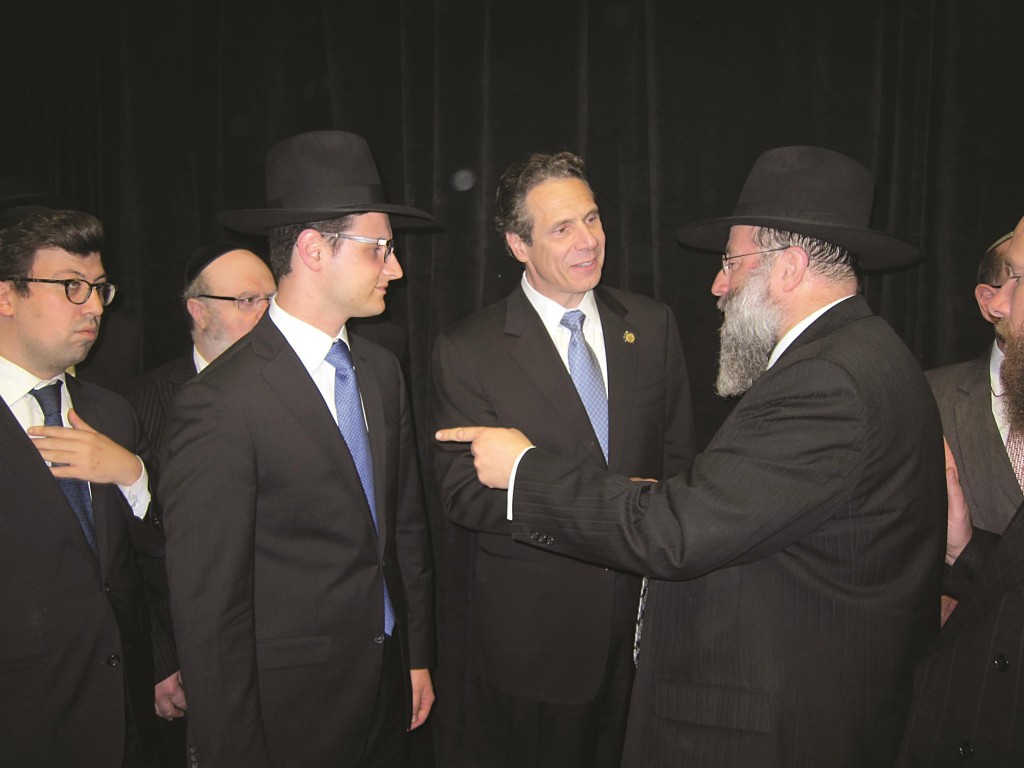 Framing his first visit to Boro Park since becoming governor as part of a 35-year relationship, Democrat Andrew Cuomo drew a standing ovation when he declared Wednesday evening that helping private school parents with tuition payments was “a matter of justice.”

Speaking at a campaign event in Bais Yaakov of Boro Park’s auditorium to about 60 yeshivah and organizational representatives, Cuomo touted the $22 million yeshivos received in the Tuition Assistance Program passed in 2011 and the 2013 law giving free busing for late homecoming yeshivah students.

But Assemblyman Dov Hikind reminded the governor that “there’s still one job left to do”: passing the Education Investment Tax Credits bill, which would give a dollar-for-dollar tax credit for money spent on education scholarships — public, private or parochial schools are all in included.

“By making Education Investment Tax Credits a reality, we will positively impact every single family in our community,” said Hikind, who himself faces reelection on Tuesday. “This is our number one priority. The time for tuition relief for our families is now.”

The bill passed the Republican Senate but stalled in the Democratic Assembly. Some have said that Cuomo could have done more to push the bill through, something he has promised Catholic leaders to do.

Councilman David Greenfield declared that “we should call [Cuomo] the ‘education governor’ because he did for us more than any other governor of New York ever did.”

Greenfield also thanked Cuomo for standing up for Israel and against anti-Semitism in New York.

Recalling a dinner the two attended while in Israel during the war in Gaza over the summer, Greenfield said that Cuomo “is the governor that you want to have with you in the foxhole. On every single issue that was important to our community, he pushed back” against reporters who were questioning Israel’s policies.

State Sen. Simcha Felder said that Cuomo, who he said is considered by some to be “this tough guy,” was actually also “made out of mush.”

“The same man that can run the state of New York and be responsible for the safety and security of all of its citizens has a heart that’s mush,” Felder said. “We had a discussion about the needs that families with special children have … his eyes welled up and you could see how much it affected him personally.”

But at the event, organized by Abe Eisner and hosted by Rabbi Osher Ehrenreich, esteemed veteran menahel of Bais Yaakov, it was Cuomo’s apparent promise to ease the tuition burden that brought the crowd to their feet.

“It’s not charity, it’s not a favor. It’s justice,” Cuomo said. “TAP, public transportation and the school buses — that was justice. Education tax credit — this is a matter of justice.”

Cuomo was introduced by Baruch Fireworker, a Yeshivah Torah Vodaath alumnus and current parent, who thanked the governor for passing TAP. Fireworker said he recalled parents having to struggle with tuition payments for beis medrash students.

“Thanks to Governor Cuomo,” Fireworker said, “many families no longer need to make these tough decisions.”

Cuomo turned to humor to describe his belief that government should help Jews send children to yeshivah. He evoked his father, former Gov. Mario Cuomo, whose “Shabbos goy” spiel of his time growing up in the Bronx delighted Jewish audiences in the 1970s.

Today’s “Shabbos goy” equivalent, Cuomo suggested, was that “government has to get involved in helping Jews live their faith.”

Cuomo on Tuesday faces Republican Rob Astorino, who has made the tax credits a central plank of his education platform, slamming the Democrat for failing to deliver on his promise.

Nobody mentioned Cuomo’s push to pass immorality legislation in 2011 or his advocacy this year to set up casinos — including one in Monticello where tens of thousands of Jews spend their summers. Both actions aroused considerable opposition at the time but have not been brought up in the current campaign, where Cuomo leads his opponent by at least 20 points.

Cuomo reached back decades to explain why he was coming less than a week before the elections to Jewish neighborhoods — he had earlier that day visited Harav Zalman Leib Teitelbaum, the Satmar Rebbe — for the first time since taking office four years ago.

“This is not about a week before election day,” he said. “This is about a 35-year relationship that we share.”

“This is a special relationship,” he added. “And politics is about relationships. Some of them are fleeting — this is 35 years. This is a relationship that I want to honor and I want to continue. And I will do anything in my power to build and to grow this relationship.”

Cuomo reminisced about his “remarkable, remarkable trip” to Israel, calling it “a trip that I’ll never forget.” He said that much of Israel’s troubles come from not having enough good media, and that he was interested in helping improve its image.

Cuomo lavished praise on the local elected officials, calling Hikind “a hero of mine,” who defined “what public service is all about.

Cuomo’s remarks appeared to be well received by the crowd, who broke in several times with loud rounds of applause, and by the speakers.

“I think that the Hand of G-d is on your shoulders,” Rabbi Ehrenreich told Cuomo. “All Jews are grateful for your leadership,” Greenfield said. “I can only promise that in four years we’ll be doing this again, only it’ll be ‘Cuomo for President,” Agudath Israel of America’s chairman of the board Shlomo Werdiger said.

But Cuomo, who has recoiled from presidential talk, got in the last word.

“You had to make trouble. It was all good up until now,” he said.