Fighting Heavy in Kobani Despite Airstrikes 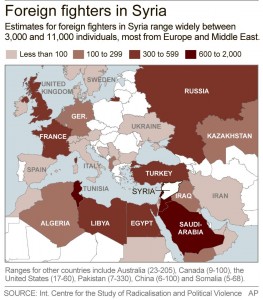 Despite the large death toll and international intervention to aid Kurdish forces fighting to defend Kobani, Islamic State forces on Thursday seized a hilltop overlooking the town along the Syria-Turkey border, activist said.

To aid their brethren, Iraqi Kurds pledged to send dozens of fighters over the coming days to battle alongside Syrian Kurdish forces in Kobani.

Earlier this week, the U.S. Central Command said its forces conducted more than 135 airstrikes against the terrorists in and around Kobani, killing hundreds of fighters.

Capturing Kobani would give the Islamic State group, which already rules a huge stretch of territory spanning the Syria-Iraq border, a direct link between the Syrian province of Aleppo and its stronghold of Raqqa, to the east.

NATO’s supreme military commander, U.S. Air Force Gen. Philip Breedlove, said in Turkey on Thursday that the alliance was ready to come to Turkey’s defense if the situation on its border deteriorated and it sought help from the organization.

He said that NATO had already provided Turkey will a Patriot missile defense system that it had deployed on the border with Syria.

“NATO is ready,” Breedlove said. “We will work together to face this challenge that we see on the border.”

This article appeared in print on page 2 of the October 24th, 2014 edition of Hamodia.