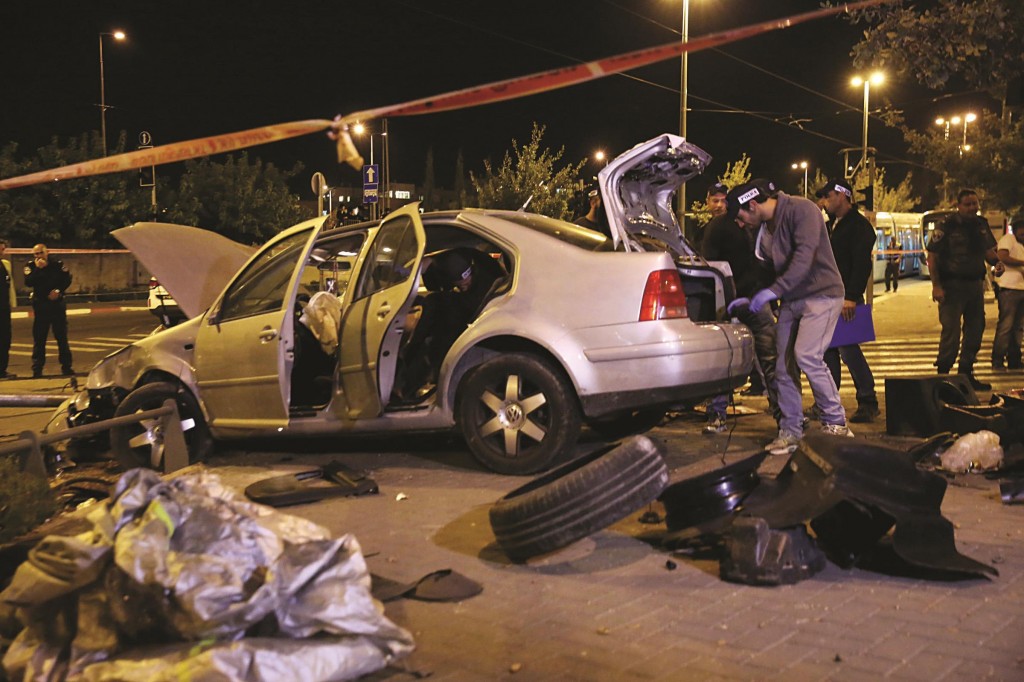 A 3-month-old baby was killed and seven others injured in Yerushalayim on Wednesday as an Arab driver went on a rampage near a light rail station at Ammunition Hill.

The infant, Chaya Zissel Braun, Hy”d, who was on her way home with her parents from her first visit to the Kosel, was taken to Mount Scopus’ Hadassah Medical Center in critical condition, and later succumbed to her wounds despite all efforts to save her.

Just a short time before the tragic event, the parents photographed her being held at the Kosel, facing Har Habayis. “This is the Makom Hamikdash, this is Har Habayis,” they said to her.

As soon as they stepped down from the light rail, the Arab driver plowed into the people standing there, hitting Chaya Zissel Braun’s stroller with the baby in it.

Grandmother Esther Braun spoke with Hamodia just before she and her husband Moshe Braun left Los Angeles for Israel to be with their children.

“She was such a beautiful, beautiful little girl,” Mrs. Braun said. “There are no words for such a tragedy. The people who killed her are just animals.”

She added that the parents had waited two years for Chaya Zissel, their first child. “They are such a special couple. They weren’t raising her with Sesame Street. She had pictures of Gedolei Yisrael in her stroller. That’s how they were raising her.”

Mrs. Braun mentioned that her parents survived Auschwitz. “But no matter what happens, we say, Tzaddik Atah, Hashem.”

In his own statement of anguish on Wedneday night, grandfather Shimshon Halperin of Monsey (son of Rabbi Raphael Halperin, z”l, founder of Optica Halperin), told reporters, “She was a pure, holy neshamah … murdered for no reason. Arab hatred knows no mercy,” he said.

In addition, a 50-year-old woman was reported in serious condition. The others, who suffered lighter injuries, were also taken to hospital for emergency treatment.

The car struck the train station near the national headquarters of Israel’s police force. Police spokesman Micky Rosenfeld said the driver got out of the car and tried to flee before he was shot by a police officer.

“We look at this incident as a terrorist attack,” Rosenfeld said. He said the area was cordoned off and forensic and bomb disposal experts were on the scene examining the car.

Rosenfeld said the driver, a resident of the of Silwan, was in serious condition. He added that the driver “has served time in Israeli prison for terrorism.” Israeli media reported he was a member of the Islamic terror group Hamas.

Outraged reactions poured forth in the Israeli media. Prime Minister Binyamin Netanyahu said: “This is how Abbas’s partners in government  [Hamas] act. This is the same Abbas who, only a few days ago, incited toward a terrorist attack in Yerushalayim,” he said.

Netanyahu ordered that security forces in the capital be reinforced following the attack,

Interior Security Minister Yitzchak Aharonovich, who went to the scene, said that, “all signs indicate this is a terror attack.”

However, following official policy to play down the ongoing Arab violence in the city, Aharonovich insisted that “this is not an intifada.”

Afterwards, the Light Rail said in a statement it was running partial service between the Mount Herzl and Damascus Gate and the Givat HaMivtar stations.

Housing and Construction Minister Uri Ariel, whose office is a short distance from the Ammunition Hill station, said “the violence in Yerushalayim reached its peak today. The reality in recent months of repeated violent incidents by [Arabs] must stop.

“It started with throwing rocks and Molotov cocktails and continued to deteriorate and today, unfortunately, Jewish blood was spilled,” he said.

“For a long time, residents of Yerushalayim have been hopeless hostages in facing the growth of Arab rioting. A terrorist is a terrorist, whether he is throwing a rock or holding a gun. They face the same fate and they should be stopped with the same determination,” he said.

Yishai called upon the government to demolish terrorists’ homes to deter others from carrying out attacks.