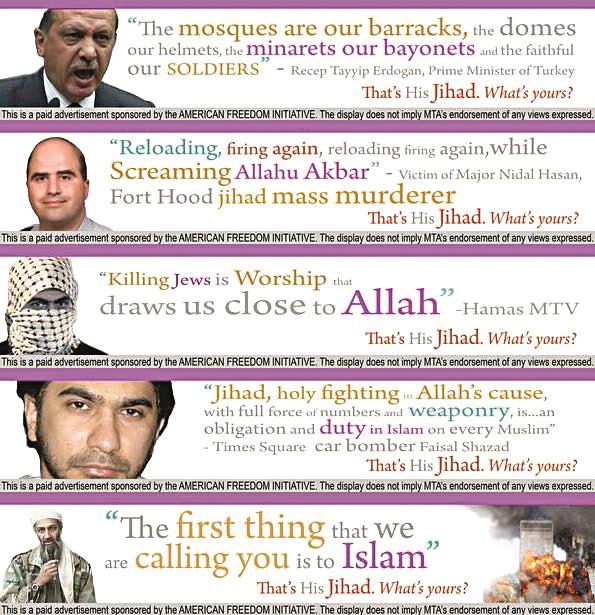 A conservative group sued the MTA on Wednesday, asking a court to force it to accept a bus advertisement including the phrase “Hamas Killing Jews” after it was rejected on the grounds its display could incite violence.

The lawsuit was filed in federal court in Manhattan by the American Freedom Defense Initiative, an organization headed by blogger Pamela Geller that’s behind the advertisement. The lawsuit sought a ruling forcing the MTA to lift its objections and an award of unspecified damages for violations of the First and 14th amendments.

According to the lawsuit, Geller’s group buys the advertisements to express its message on current events and public issues “including issues such as Islam’s hatred of Jews.”

It said the MTA notified the group in August that it would display three of four advertisements but not an ad with the quote “Killing Jews is Worship that draws us close to A-lah” because it could incite violence. In the ad, a covered face is shown next to the quote, attributed to “Hamas MTV.” It is followed by: “That’s his Jihad. What’s yours?” The ad was a parody of “MyJihad” ads sponsored by the Council on American-Islamic Relations (CAIR), which said it was promoting the concept that jihad is a personal struggle rather than a violent conflict or terrorism.

The lawsuit said the ad rejected by the MTA has been displayed in other major cities, including Chicago and San Francisco, without acts of violence attributed to it.