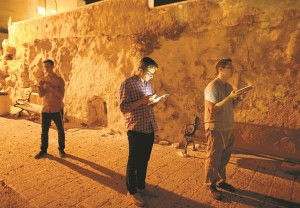 The throng of men covered in wool prayer shawls swayed up and back like a white wheat field in the wind. They were saying … or, Moishele wondered, was that singing? … strange jarring words that he didn’t understand.

The wool tallis (prayer shawl) of the other man next to him felt scratchy. The voices and words felt scratchy too. Moishele liked it better when his father took him along to watch the sheep. He liked the soft feel of their wool. He liked the soft sound of their baaing. But most of all, Moishele liked to play his little shepherd’s whistle to the sheep. He talked, he sang, he cried to them … all through his whistle.

“What are they saying, Poppa?”

The men around them took no notice of the shepherd and his boy. They were all concentrating on the N’eilah, the closing prayers of Yom Kippur. And they were concentrating on the Baal Shem Tov, the founder of the chassidic movent. Never had they seen him so intense. The Baal Shem Tov’s tallis was soaked through with sweat. His whole body shook. Then he stood stock-still. Then he started shuddering again.

The congregation prayed like never before. They cried, they trembled. They begged Heaven for mercy.

Moishele didn’t understand the words. But he understood the crying. “Poppa, please! I have to play my whistle!”

“No! NO! Stop this! It’s not allowed!” Moishele reached for his pocket. But before he could get out his whistle, his father grabbed his hand and held it tight inside the pocket. Throughout the N’eilah prayers, Moishele struggled to free his hand. The men around them took no notice. They were totally absorbed in the prayers … and in the Baal Shem Tov’s Heavenly struggle.

Suddenly, a shrill sound burst through the room, above the roar of the prayers. Moishele puffed up his mouth to blow again. But the shul fell silent. Frightened, Moishele dropped his whistle. An angry murmur spread through the room.

Then a voice boomed over the crowd. “LEAVE HIM ALONE!” The Baal Shem Tov turned and faced them. But instead of tears or a scowl, they were shocked to see a smile on the Baal Shem Tov’s face — a smile of intense joy.

“The entire day,” the Baal Shem Tov said, “I felt the Gates of Heaven were closed. No matter how hard I banged at the Gates, they wouldn’t open. Then, just when I thought all was lost, Moishele blew his whistle. He blew it with his whole heart! And the holy sound broke open the Gates and let my prayers through!”

Of all chassidic tales, this is the best known … and the least understood. It is always told as a hymn of praise to the virtue of simple sincerity. And, in truth, it is. The Sages teach us “Rachmana liba ba’i — G-d wants the heart.”

But sincerity is only the beginning. Sincerity is vital. But vitality without deeds is a tragic waste of potential. As a wise man in Yerushalayim told me decades ago, “If Moishele had blown his whistle the next Yom Kippur … the chassidic movement would have failed. The Baal Shem Tov did not strive to raise a generation of whistlers by N’eilah.

Simple sincerity is the key that opens the lock. But once the lock is open, we still have to turn the handle, open the door … and step in.

The same wise man gently kidded me about my dabbling in Chassidism:

A man once brought his son to a shoemaker to learn the trade. After a few months, the father asked the shoemaker how his son was doing.

“He already knows two thirds of the trade!”

Then he added, with a twinkle, “You already know two thirds of Chassidism. Now all you have to learn is the work!”

(This article first appeared on JewishWorldReview.com)

This article appeared in print on page 11 of the October 2nd, 2014 edition of Hamodia.