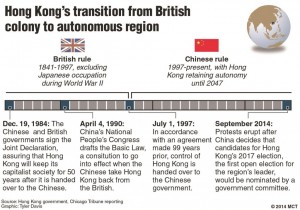 Tens of thousands of pro-democracy protesters blocked Hong Kong streets Tuesday morning, maintaining pressure on China as it faces one of its biggest political challenges since the Tiananmen Square crackdown 25 years ago.

Riot police had largely withdrawn and there were none of the clashes, tear gas and baton charges that had erupted over the weekend. As tensions eased, some exhausted demonstrators slept on roadsides while others sang songs or chanted slogans.

One young police officer relaxed in a chair and played on his mobile phone as thousands of demonstrators milled in the streets nearby, some singing and dancing.

Asked why there were so few police, he replied: “Actually, I don’t have a reason for you. But we are tired. We are all human beings so we need a rest.”

The protesters, mostly students, are demanding full democracy and have called on the city’s leader Leung Chun-ying to step down after Beijing last month announced a plan to limit 2017 elections for Hong Kong’s leader, known as the Chief Executive, to a handful of candidates loyal to Beijing.

China rules Hong Kong under a “one country, two systems” formula that accords the former British colony a degree of autonomy and freedoms not enjoyed in mainland China, with universal suffrage set as an eventual goal.

Communist Party leaders worry that calls for democracy could spread to the mainland, and have been aggressively censoring news and social media comments about the Hong Kong demonstrations.

The outside world has looked on warily, concerned that the clashes could spread and trigger a much harsher crackdown.

“The United States urges the Hong Kong authorities to exercise restraint and for protesters to express their views peacefully,” White House spokesman Josh Earnest told a daily briefing on Monday.

The demonstrations, labeled “illegal” by China’s Communist-run government in Beijing, are the worst in Hong Kong since China resumed its rule over the territory in 1997.

At their height, white clouds of tear gas wafted among some of the world’s most valuable office towers and shopping malls, before riot police suddenly withdrew around lunchtime on Monday.

As tensions subsided, weary protesters dozed or sheltered from the sun beneath umbrellas, which have become a symbol of what some are calling the “umbrella revolution”.

This article appeared in print on page 3 of the September 30th, 2014 edition of Hamodia.