Business AUTO REVIEW: Testing the 2015 Chevy Silverado Heavy Duty: Get in or Get Out of the Way
Business 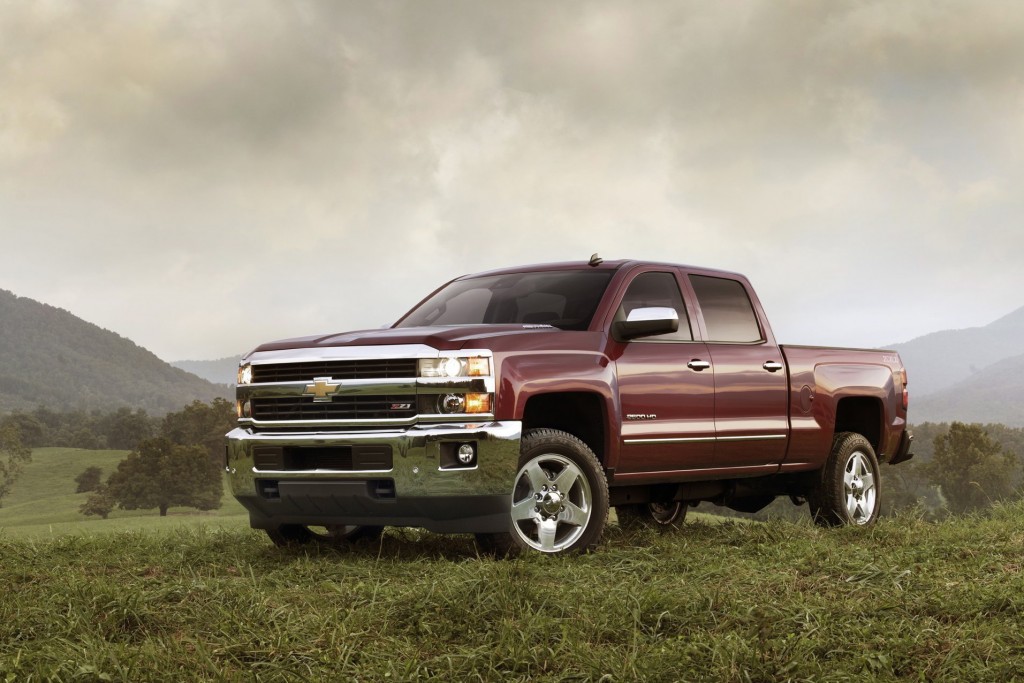 Anything roughly as big as a Motel 6 can quickly become an expressway smasher.

Here, let me get some truck-driving tunes on … oops. Was that little jolt a Mini Cooper or a VW Beetle?

Hard to tell from up here.

You don’t climb into the massive, diesel-powered truck. You inch up a metal cliff to clamber into the cab, hoping you don’t slip and slide back down.

Once I got the Silverado 2500 HD docked at Chateau Box in Richardson, though, I always enjoyed the early-evening twinkle of downtown Fort Worth.

But in case you haven’t noticed, big, heavy-duty pickups — the ones with enough steel in their frames for a credible bomb shelter — have grown truly huge.

They are longer, taller, slightly wider and probably 1,000 pounds heavier than the largest pickups 15 years ago — and they absolutely mortify Prius drivers.

Moreover, they won’t fit in most private garages or many public garages downtown, are way too long for parking spaces and can barely negotiate driveways.

But they also ride and drive better, consume slightly less fuel, haul far more weight and offer vastly more amenities than those old sledgehammers we bashed around in in the ‘90s. (How about a Bose stereo system and heated and cooled seats?)

Granted, the restyled ‘15 Silverado HD looks a lot like the previous-generation truck, a common approach in the conservative full-size pickup segment.

But I thought the one I had recently really bristled with new toughness in a low-key sort of way.

A jut-jawed, upright front end featured a huge horizontal grille with a big gold bow-tie emblem in the center and a gargantuan chrome bumper.

Familiar stacked headlamps identified this beast as a Chevy, and a raised hood with nifty “Duramax” and “Allison Transmission” emblems indicated this was a real ground-pounder.

Square, slightly flared wheel arches front and back gave the truck a vaguely industrial look that it wore well.

In back, at the right corner of the Silverado, was the best chest-beating touch of all — a 5-inch-diameter exhaust pipe that looked like the business end of a flame thrower.

In many ways, it was. My Silverado — a full-boat $61,000 model — featured a 6.6-liter Duramax diesel beneath the hood, a sophisticated oil-burner that produced 397 horsepower and 765 pound-feet of torque.

Although those engine numbers look pretty impressive, the Chevy is actually down a bit compared with the diesel-powered Ford Super Duty (860 pound-feet of torque) and the monster heavy-duty Ram (a maximum of 865 pound-feet).

But you would be extremely hard-pressed to find any of those missing “torques” — as Jeremy Clarkson calls them.

Before you blast off in the truck, you may need to lower the window to make sure the Max is spinning.

Like so many modern diesels, the engine emits a slight clatter when it’s cold but pretty quickly settles into a pleasant, somewhat-muted growl.

Give it the boot — a hard push is needed — and this giant mass of metal rises up some and bolts down the road, feeling a bit like a house caught in a mudslide.

In fact, it will bear-sprint to 60 in a very fleet 7.6 seconds, according to Car and Driver, which is quick enough to dust many midsize sedans.

At any speed under 80, the truck responds to jabs of the throttle with a pleasant, torquey surge.

In addition, the Allison transmission did a good job of keeping the Duramax mostly between 2,000 and 4,000 rpm, where life felt good.

Heavy-duty pickups remain exempt from economy standards, so who knows how much the Silverado guzzles?

It can also tow 13,000 pounds, a max that should easily cover your party boat.

Oddly, for such a large structure, er, truck, the Silverado steered and stopped nicely.

Unexpectedly light, the steering felt fairly quick with decent road feel, making me think I might just be temporarily in control.

As you might expect, the massive Silverado simply hated corners — even equipped with stability control.

That’s what the brakes were for, I guess.

Once I got accustomed to maneuvering the truck in traffic, the biggest challenge to living with it was its lousy, old-school ride — the product, I think, of the pickup’s optional Z71 suspension.

Most of the new Silverado HDs I’ve been in ride firmly, but they rarely jostle you hard.

Big Red bucked over slightly beat-up pavement, crashed hard on potholes and shuddered over tar strips all the way down to its frame.

Even on smooth concrete, it oscillated constantly. If you’re thinking of checking the Z71 box on a four-wheel-drive heavy-duty Silverado, I would strongly recommend you drive one first.

At least the truck’s new, much-improved interior absorbed some of the pounding. Everything about the gray interior of mine looked pretty high-quality.

A black plastic dashboard had a nice rich tone to it and was “stitched” on its edges.

The Silverado’s center stack was enormous, trimmed in silver and flashing an 8-inch touchscreen.

The console was equally gigantic, capable of serving as a mobile desktop of sorts.

Sectioned with perforated centers, they looked and felt good. Even the tweed-pattern gray headliner looked right on the Silverado HD.

Leg and head room in back were simply enormous. I’m pretty sure we can squeeze 15 or 20 sleeping bags into the truck if you can locate a neon motel sign.

That might be the only way we city slickers can justify an overgrown, diesel-powered pickup built to go to war with the air conditioning and stereo blasting.

Gigantic pickups are not my stein of beer, kids. But I truly believe they are far and away the best, most capable vehicles we build in the U.S.

Bubbas are us, even in California.