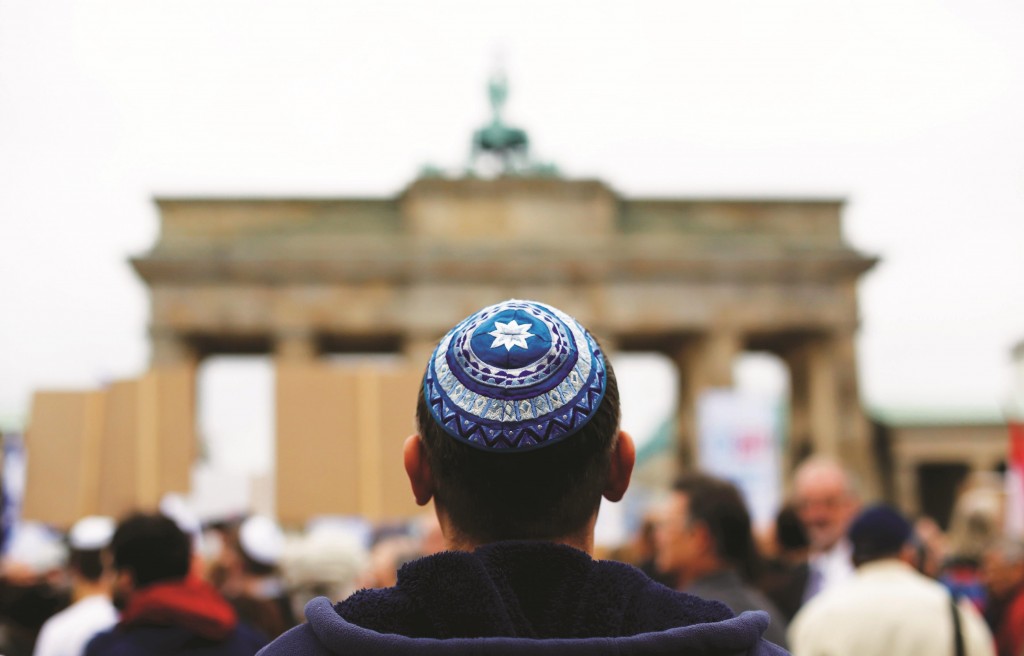 Representatives from Germany’s political elite, including Chancellor Angela Merkel and President Joachim Gauck, attended a rally in Berlin to confront a rise in anti-Semitism, fermented by protests over the summer’s Gaza War.

“That people in Germany are threatened and abused because of their Jewish appearance or their support for Israel is an outrageous scandal that we won’t accept,” said Chancellor Merkel in her keynote address. “It’s our national and civic duty to fight anti-Semitism. Anyone who hits someone wearing a skullcap is hitting us all. Anyone who damages a Jewish gravestone is disgracing our culture. Anyone who attacks a synagogue is attacking the foundations of our free society.”

The Chancellor also stressed the “miracle” of the very existence of Jewish life in Germany 70 years after the Holocaust. She went on to proclaim that Jewish life is part of German “identity and culture.”

Merkel said it pains her to hear of young Jewish parents asking whether they can raise their children in Germany, or older people asking whether it was right to stay.

“We want Jews to feel safe in Germany,” Merkel said. “They should feel that this country is our common home in which they, like all people who live here, have a good future.”

Joshua Spinner, CEO of the Berlin-based Ronald S. Lauder Foundation, told Hamodia that Merkel’s remarks go beyond a standard concern for equal rights, but that Germany’s past obligates them to protect Jews and stand up against anti-Semitism.

The event brought together leaders of Jewish organizations with politicians, business leaders, Germany’s top Catholic and Protestant clergy, as well as Muslim community leaders. The rally, advertised as “Stand Up Against Anti-Semitism,” drew a crowd estimated at between five and six thousand participants.

According to eyewitness reports, the rally, besides being attended by a cross section of Germany’s Jewish communities, rallied support from several other minority groups, including Biafrans, Syrian Christians and Kurds.

Cardinal Reinhard Max, president of Germany’s Council of Bishops, addressed the rally, speaking of the responsibility of the masses in confronting this issue, saying that “the minority can only become louder if the majority is silent.”

Deirdre Berger, director of AJC Berlin Ramer Institute for German-Jewish Relations, said in an interview with Hamodia that while anti-Semitic rhetoric over the summer was largely perpetrated by radical elements of Germany’s Muslim population, a key message of the rally was “to admit that this is a German and not a Muslim problem.”

Dr. Dieter Graumann, president of the Central Council of Jews in Germany, the chief organizer of the event, stressed another central theme of the rally.

“This latest anti-Semitic outbreak began with the Gaza war,” he said. “But what does one have to do with the other? When we hear in German streets shouts of ‘Jews should be gassed,’ or ‘burned,’ or ‘slaughtered,’ this has nothing to do with criticism of Israeli policies. This is pure, unadulterated anti-Semitism and nothing else.”

Mr. Spinner explained that the issues of anti-Israel and anti-Semitic feelings are “very blurred” in Germany, but said that speakers tried to make a clear distinction, saying that while there is nothing inherently wrong with criticizing Israel more than any other nation, the seeming obsession with the topic points more to it being a veil for anti-Semitism.

The day following the rally, the World Jewish Congress commenced a conference in Berlin, the first of the organization’s events in Germany since the Second World War. According to Mr. Spinner, WJC President Ronald Lauder had called for the meeting to take place in the German capital as a specific sign of recognition from the Jewish community of the country’s efforts to make itself a safe place for Jews.

“We have an obligation to think in a serious way about what is good for Yidden today,” said Spinner. “This does not take away from our obligation to remember history, but we must be a forward-looking people.”