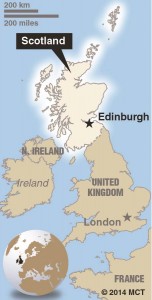 Britain’s main political leaders scrambled Monday to offer Scotland greater autonomy in a last-minute bid to stave off independence, as the pound sank on opinion polls suggesting separatists are gaining ground — and may even be in the lead.

A Yes vote in next week’s referendum would end Scotland’s 307-year-old union with England and plunge Britain into uncharted constitutional and economic waters.

Many British politicians and business leaders have long considered that outcome unlikely, and for months polls have put the anti-independence side ahead. But the gap has narrowed ahead of the Sept. 18 vote and one survey released Sunday by pollster YouGov showed the two sides nearly even.

YouGov’s methodology — which samples from a pool of online respondents who have signed up for the panel and are paid to participate — is not trusted by all poll-watchers, and other surveys gave the advantage to the No side. But the sense that the race is too close to call rattled independence opponents, and energized supporters.

“I don’t think there’s any doubt at all the momentum is with the Yes campaign,” said Scotland’s pro-independence Deputy First Minister Nicola Sturgeon.

“Increasing numbers of people are concluding the best way to protect the health service, create jobs and ensure we never get Tory governments we don’t vote for is to vote Yes.”

The leader of the anti-independence “Better Together” campaign denied his forces were panicking.

But the sudden move to offer greater powers to Scotland suggests the No campaign is far from confident.

Scotland joined England and Wales to make Great Britain in 1707. Now with a population of 5.3 million — one-tenth of England’s — Scotland already has considerable autonomy, with its own parliament and separate legal and educational systems.

Britain’s Conservative, Labour and Liberal Democrat parties — all of whom oppose independence — are preparing to offer Scotland even more financial independence, including greater tax-raising powers, in a bid to avert a Yes vote.

This article appeared in print on page 1 of the September 9th, 2014 edition of Hamodia.