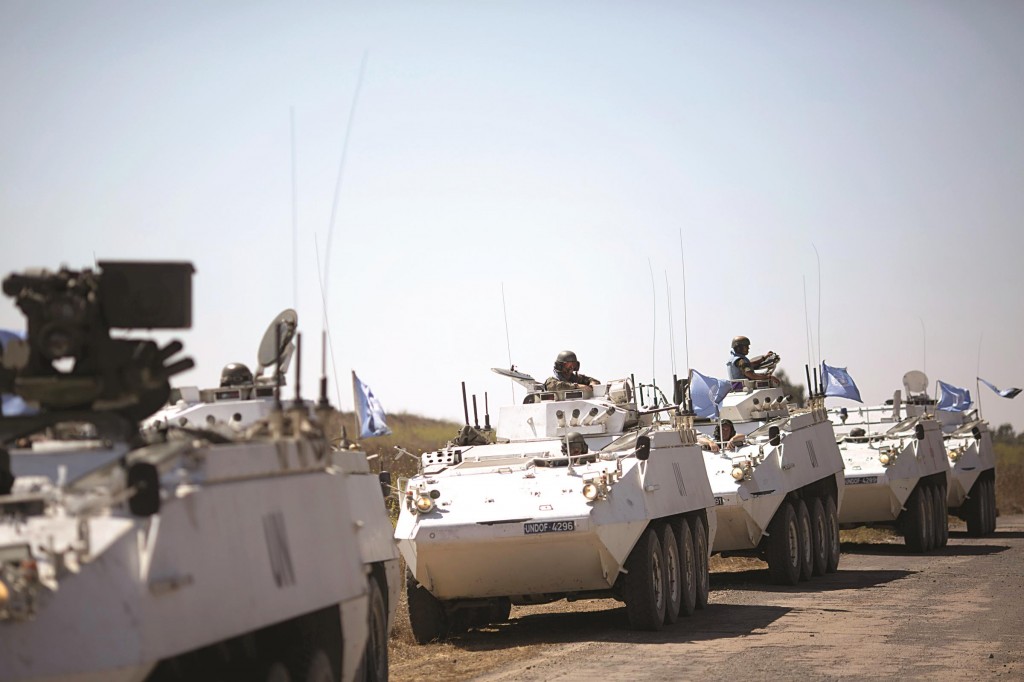 An armed group detained 43 U.N. peacekeepers during fighting in Syria early Thursday and another 81 peacekeepers are trapped, the United Nations said.

The peacekeepers were detained on the Syrian side of the Golan Heights during a “period of increased fighting between armed elements and the Syrian Arab Armed Forces,” the office of U.N. Secretary-General Ban Ki-moon said in a statement. It said another 81 peacekeepers are “currently being restricted to their positions in the vicinity of Ar Ruwayhinah and Burayqah.”

The statement did not specify which armed group is holding the peacekeepers. Various Syrian rebel groups, including the al-Qaida-linked Nusra Front, have been fighting the Syrian military near the Golan  Heights. On Wednesday, opposition fighters captured a Golan Heights crossing point on the disputed border between Syria and Israel.

UN spokesman Stephane Dujarric said the 43 detained peacekeepers are from Fiji and are thought to be in the southern part of the area of separation. The 81 troops from the Philippines had their movements restricted.

“The situation is extremely fluid. Obviously, we are very concerned,” Dujarric said.

“We are dealing with non-state armed actors,” he said. “The command and control of these groups is unclear. We’re not in a position to confirm who is holding whom. Some groups self-identified as being affiliated with al-Nusra, however, we are unable to confirm it.”

The statement said the UN “is making every effort to secure the release of the detained peacekeepers,” who are part of UNDOF, the mission that has monitored a 1974 accord between Syria and Israel after the 1973 Yom Kippur war.

The Security Council condemned the detention of the 43 peacekeepers and the restriction of movement of the other 81 and called for their immediate release. A press statement blamed “Security Council- designated terrorist groups” and “members of non-state armed groups.”

“This is a force that is responsible for peacekeeping around the world, and certainly we don’t think they should be a target of these type of efforts,” Psaki said.

In June, the UN Security Council strongly condemned the intense fighting between Syrian government and opposition fighters in the Golan Heights and demanded an end to all military activity in the area. Syrian mortars overshooting their target have repeatedly hit the Golan, and UN peacekeepers have been abducted.

Thursday’s statement noted that UNDOF peacekeepers who were detained by armed forces in March and May were later safely released.

As of July, UNDOF has 1,223 troops from six countries: Fiji, India, Ireland, Nepal, Netherlands and the Philippines. But the Philippine government last week said it would bring home its 331 peacekeeping forces from the Golan Heights after their tour of duty ends in October.

In June 2013, Austria said it was withdrawing its 377 U.N. peacekeepers from the Heights. Croatia also withdrew in 2013 amid fears its troops would be targeted.