Business US Airlines Increase Their Profits Without Ballooning Their Fleets
Business 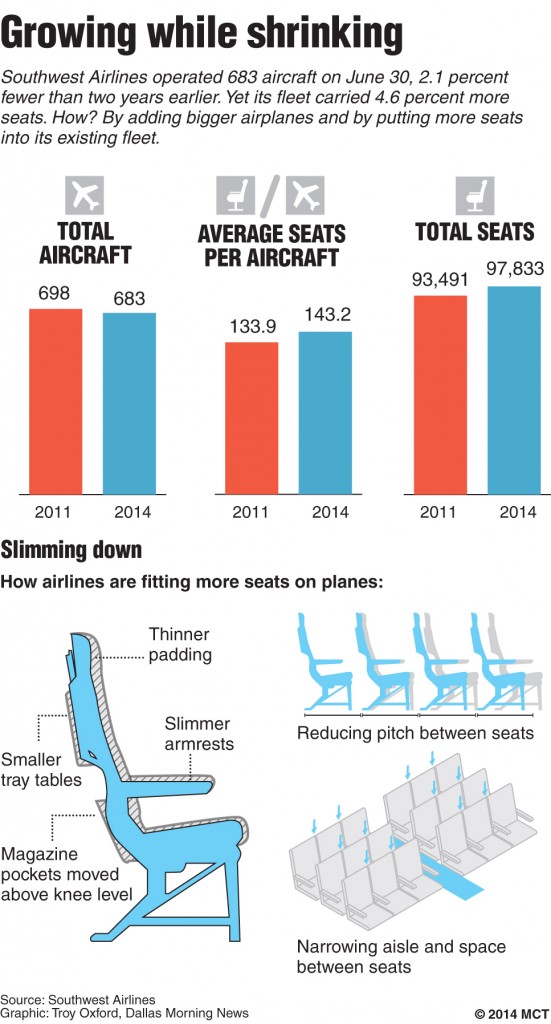 And it will do so without adding a single airplane.

Fort Worth, Texas-based American is removing the first-class cabin, upgrading the business-class cabin and adding coach seats to increase capacity on those 47 airplanes from 247 seats to 289 seats — adding a lot more seats to sell with little increase in expense.

Similarly, Southwest Airlines Co. undertook a three-pronged approach several years ago to increase its capacity without increasing its fleet. It put another row of seats in most of its existing 137-seat airplanes; it began flying a larger, 175-seat version of the Boeing 737; and it is taking 117-seat Boeing 717s out of its fleet.

The result? Since the end of 2011, Dallas-based Southwest has reduced the number of airplanes it is operating by 2.1 percent but has increased the number of seats it flies by 4.6 percent. Its average airplane now has 143.2 seats, up 6.9 percent from just 2 1/2 years ago.

In industry lingo, Southwest and American are up-gauging — the new buzzword for U.S. airlines. Throughout the U.S. airline industry, other carriers are performing variations on what the two North Texas-based carriers are doing.

Delta Air Lines offered 3 percent more capacity on its domestic route network in the second quarter than in the same three months of 2013, even though it operated 4 percent fewer flights.

Alaska Airlines expects to increase capacity 7 percent in 2014, with 2.5 percentage points of that coming simply from flying larger airplanes. It increasingly buys the larger Boeing 737s, the 737-800s and 737-900s, and it’s increasing the number of seats in those airplanes.

There’s also been a boom in the use of regional jets with 76 seats or more, while the number of jets with 50 seats or fewer is shrinking.

The added seats have done nothing to increase the comfort of the majority of passengers crowded into the coach section. But the advent of thinner seats has minimized the loss of legroom on many airplanes.

The Boeing 777-200 conversion is a particularly interesting one. Delivered between 1999 and 2001, the 777-200 has been the international flagship of American’s fleet. As such, it had the latest and greatest seating for that era.

But two years ago, American began accepting delivery of the Boeing 777-300ER, a larger, 310-seat airplane that has displaced the 777-200 at the top of American’s aircraft hierarchy.

The 777-300ER, equipped with the latest in lie-flat seating, in-flight entertainment and amenities, is now used on high-value routes like London Heathrow and São Paulo, Brazil, as well as American’s longest international route, Dallas/Fort Worth to Hong Kong.

The main aircraft serving American’s Asian routes remains the 777-200. From Dallas/Fort Worth, for example, American uses the 777-200 to fly to Tokyo, Shanghai and Seoul, with only Hong Kong getting the 777-300ER.

The remake of the 777-200 will remove its first-class section. But the business-class section will get the latest model of true lie-flat seats, replacing the “lie-flat-at-a-slant” seats that are currently on the aircraft.

Equally important, the airline will add more coach seating, including the “Main Cabin Extra” seats that offer more legroom to premium passengers or those willing to pay for the benefit.

The old, 247-seat configuration had 16 seats in first class, 37 in business class and 194 in coach. The 289-seat configuration will also have 37 business seats, but the new design will give it 252 in the coach section, including 48 of the Main Cabin Extra seats.

According to the U.S. Bureau of Transportation Statistics, American has lost money on its Asian routes for years. It lacks the Tokyo hubs and broader Asian route networks that competitors Delta and United Airlines enjoy.

Nocella said the 777-200 resizing should make that fleet more profitable.

“The economics of a 247-seat 777 are very challenged all around the globe, and we’re fixing it,” Nocella said. “The reality is that the 289-seat configuration we’re about to have is going to have a material financial improvement across the entire network, but in particular, it’s really good for Asia.”

Already, American’s competitors are putting more seats on their 777-200s than its planned 289 seats. Delta has 291 seats on its 777-200s, and United has up to 348 depending on the configuration, according to Seatguru.com.

OUT WITH THE OLD

In many cases, the new, larger airplanes arriving at U.S. carriers are simply to replace older, smaller ones. That pleases industry watchers, who remember the market-share wars of past decades that saw airline fleets expand rapidly while airline profits did not.

Airline-investment analysts cite the restraint of U.S. carriers for the record profits that a number of airlines are posting this year — a combined $4 billion in the second quarter alone.

“These results are in stark contrast to what we are seeing from many overseas airlines, which are being challenged by competitors that lack capacity discipline,” analyst Michael Linenberg of Deutsche Bank wrote in a July report.

One reason credited for the industry’s soaring profits is that carriers aren’t adding more capacity than demand can support. And to a large extent, they’re trying to add capacity without adding airplanes.

United’s capacity declined 1.4 percent in 2013 compared with a year earlier. It started the year with plans to grow capacity only 1 to 2 percent.

American drew the concern of investment analysts in early 2012 when management rolled out a turnaround plan in bankruptcy that could have had the carrier grow 20 percent from 2012 to 2016.

Instead, the carrier agreed to a plan to merge with US Airways that promises to keep capacity much more restrained, even though it didn’t cut either airline’s order of new planes. The combined airline, which operated a fleet of 984 airplanes as of June, has 457 more Boeing and Airbus jets on order.

That big of an order “may seem like a big pill to swallow,” analyst Hunter Keay wrote in a Monday report. But he estimated that American will retire 518 airplanes over the next 10 years or so, even as it takes the new ones.

That “essentially means the entire order book can simply replace old planes,” Keay wrote. “But given the larger gauge of these planes, AAL (American) can still grow its seat count by 2 percent with 6 percent fewer shells.

“That is generally good math for airline profitability,” he concluded.