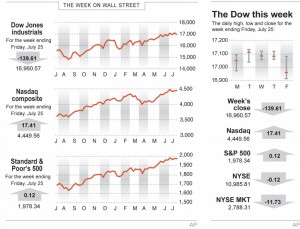 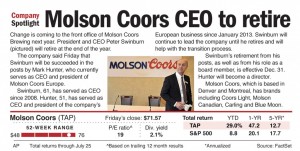 Investors got some bad news about the American shopper on Friday, driving down stocks and sending the Dow Jones industrial average to a loss for the week.

Two major U.S. companies — the retail giant Amazon and the credit card processor Visa — both said that the second half of the year was looking more troubled than originally expected. The cautious outlook from two companies so heavily exposed to consumer spending spooked investors, causing the stock market to fall at the open and remain lower throughout the day.

“Visa put a lot of caution into the market this morning,” said Quincy Krosby, a market strategist at Prudential Financial.

Visa was the biggest decliner among the blue chips, falling $7.97, or 3.6 percent, to $214.77. The credit-card processor reported an 11 percent rise in quarterly profit but cut its full-year forecast on concerns about growth overseas.

Because the Dow is a price-weighted index, and Visa is the most expensive stock in the Dow, Visa was having an outsized impact on it. Roughly 60 points of the Dow’s decline can be attributed to Visa.

Investors have closely watched Visa ever since the company went public in 2008. Credit cards that use Visa’s payment system are in nearly every person’s pocket, and each time a consumer buys a product with a Visa card the company takes a small percentage.

To see Visa give a cautious outlook is worrisome, Krosby said.

“Visa represents the consumer and the consumer is one of the most important pieces for the future of this economic recovery,” she said.

Amazon’s stock slumped 10 percent after the online retail giant late Thursday posted a much wider loss than analysts had forecast, hit by expenses. The Seattle-based company is focused on spending the money it makes to expand into new areas and products, including a smartphone, the Fire, which starts selling Friday.

Investors retreated from riskier stocks and moved into traditional havens at times of uncertainty: bonds and gold. The yield on the 10-year Treasury note eased to 2.47 percent from 2.50 percent late Thursday as demand for the government bond rose. Gold climbed $12.50, or 1 percent, to $1,303.30 an ounce.

Despite the disappointing news from those consumer-focused companies, corporate earnings from the latest quarter have been solid. Of the 230 companies that have reported so far, 76 percent have beaten profit expectations and 67 percent have beaten sales expectations, according to FactSet. So far the S&P 500 is averaging a 6.7 percent earnings growth this quarter compared to a year ago. Investors had expected earnings to be up 4.9 percent when the results started to roll in at the beginning of July.

Even with Friday’s declines, the stock market remains near all-time highs, and the S&P 500 closed at a record Thursday.

That made some investors cautious.

“I continue to see the level of complacency in the [stock] market to be unnerving,” Scott Clemons, chief investment strategist at Brown Brothers Harriman, which manages $25 billion in assets for private investors. “All of this geopolitical tension, the market trading near all-time highs, I think the market is at a critical state right now.”

Clemons said he doesn’t believe the market is poised for a major sell-off, but instead thinks investors should brace for more volatility and more heavy-handed reaction to disappointing earnings or data, like Friday’s Amazon and Visa results.

— Starbucks fell $1.71, or 2 percent, to $78.74, despite the company reporting a profit that came in above analysts’ expectations. The company also raised its full-year profit forecast.