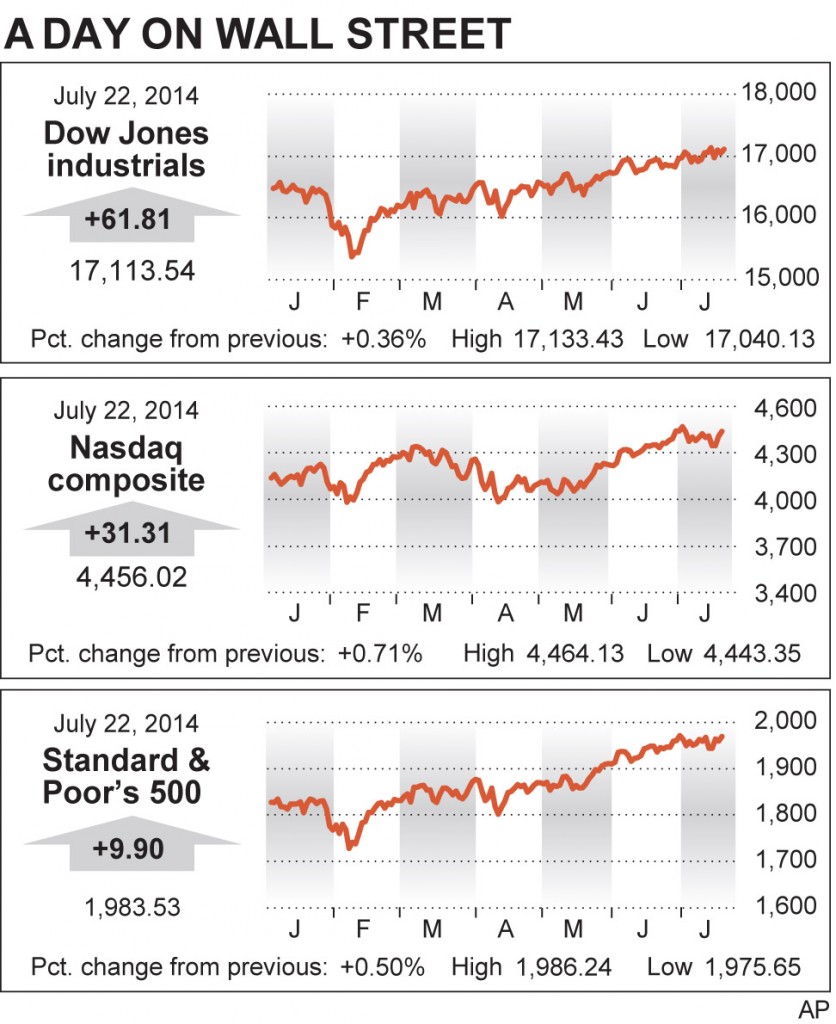 Solid earnings for a range of big companies helped nudge the stock market higher on Tuesday.

“The news today is pretty good,” said JJ Kinahan, chief strategist at TD Ameritrade. Kinahan pointed to a report out Tuesday that showed little sign of inflation and an overall stronger outlook for earnings. During conference calls to discuss quarterly results, more CEOs are taking an optimistic tone, he said, instead of warning about possible dangers.

“In the past, they all spent their time tempering expectations,” Kinahan said. “This earnings season we’re not seeing that at all. I think people are taking comfort in it.”

Chipotle surged $69.84, or 12 percent, to $659.77, the biggest gain in the S&P 500 index. The burrito chain reported that stronger sales drove its quarterly profit up 26 percent. The restaurant chain’s results beat analysts’ expectations, even as it raised prices on a range of menu items.

Wall Street is in the middle of corporate earnings season, when companies release their quarterly results. Investors pore over those reports to gauge the financial health of Corporate America, and in turn, the U.S. economy. Roughly 150 companies in the S&P 500 will report their results this week, including AT&T and Boeing on Wednesday. Visa and Amazon will report on Thursday.

Even though companies continue to post higher profits, the market still looks expensive compared to its historical average. The S&P 500 currently trades for 17.4 times earnings over the previous 12 months. The long-run average is closer to 15.

“In the short term, I expect the market to continue higher,” said Brad McMillan, the chief investment officer at Commonwealth Financial. “But I am concerned about the market’s valuation.”

On the economic front, investors got another tame report on inflation. U.S. consumer prices inched up 0.3 percent in June, with most of the increase coming from higher gasoline prices, according to the Labor Department. Core prices, which exclude the volatile food and energy sectors, were up just 0.1 percent. Over the past year, core prices are up 1.9 percent, close to the Federal Reserve’s target rate for inflation.

Herbalife jumped $13.75, or 26 percent, to $67.77. Activist investor Bill Ackman, who has a $1 billion bet against the company, vollied his latest attack against the nutritional supplement and weight-loss company, but investors appeared to dismiss it.