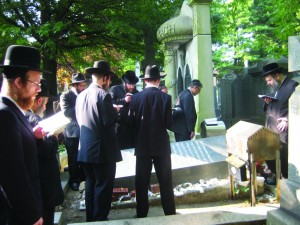 Hundreds of Yidden on Tuesday visited the tziyun of Harav Yaakov Joseph, zt”l, Rav Hakollel of New York City, for his 112th yahrtzeit at Union Field Cemetery in the Ridgewood section of Queens.

Groups representing various kehillos came, such as one from Khal Bnei Yitzchok of Flatbush led by Harav Dovid Goldwasser, who delivered divrei hisorerus. It was inspiring to observe Yidden of diverse backgrounds fervently davening for the many needs facing Klal Yisrael today in these challenging times. Many undoubtedly focused their entreaties on the tense situation in Eretz Yisrael.

Rabbi Yona Landau, who has been the major force behind the visits to the tziyun in recent years, was present to assist visitors and provide refreshments.

Harav Joseph, a Dayan in Vilna, was invited in 1888 by the kehillos in New York City to become the city’s Chief Rabbi. Upon his arrival in America in the summer of that year, Harav Joseph set out to strengthen areas of Yiddishkeit such as kashrus and shechitah, establishing systems to upgrade existing standards. He assisted talmidim of the few yeshivos in New York, as well immigrant talmidei chachamim.

At the outset, the Jewish community at large backed him. Unfortunately, unscrupulous, anti-religious elements began to thwart his valiant efforts on behalf of American Jewry. They came out most aggressively against his rectifications in kashrus.

This article appeared in print on page 15 of the July 23rd, 2014 edition of Hamodia.