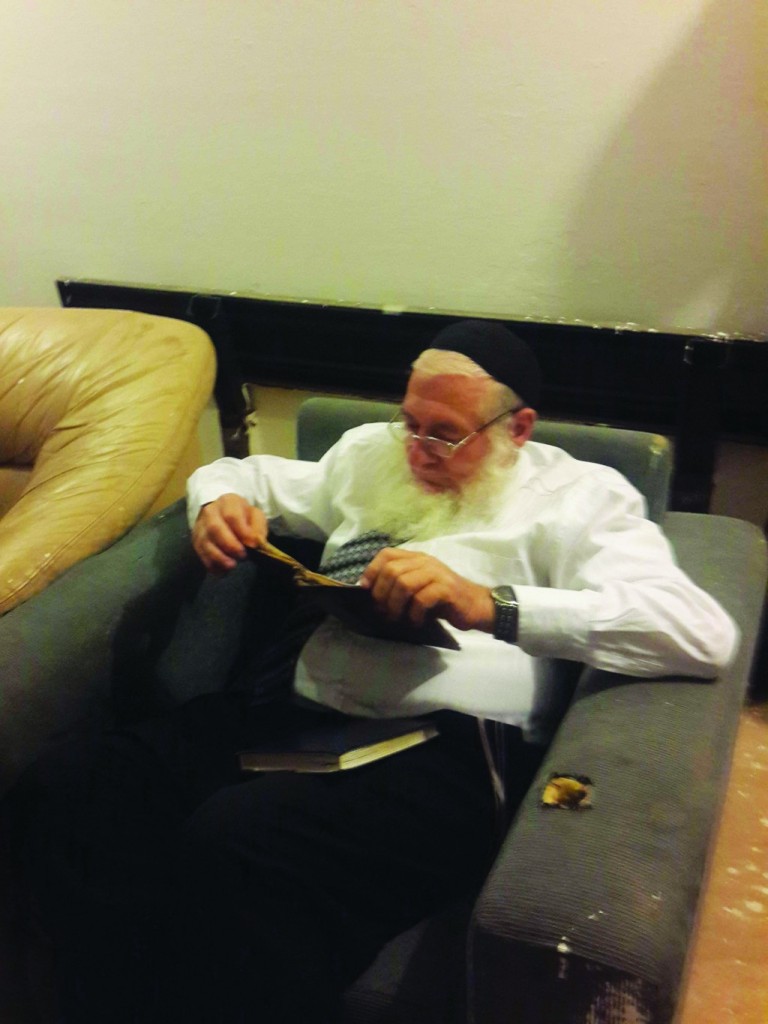 Last week in Parashas Pinchas we were introduced to the mitzvah of kana’us, zealousness: an extreme act  l’shem Shamayim. It was invoked when Pinchas killed two people, thus saving the Jewish people from a plague and meriting an eternal reward. Let’s see what exactly  Pinchas did, why he did it, why it was both sanctioned and rewarded — and why his deed has no relevance whatever to current events that may seem somewhat similar.

Pinchas killed people who were doing a terrible sin for which the Torah says that the punishment is “kana’im pog’im bo”: someone who feels the pain of the terrible chillul Hashem caused by the aveirah is permitted to kill the sinners. However, if he does the deed with less than pure intentions, then he’s just a murderer, a sinner.

Indeed, at the time Pinchas killed Zimri and Kozbi, some complained that Pinchas himself was a murderer who could do such a deed because on his mother’s side he descended from Yisro, who was originally an oved avodah zarah. But Hashem responded by calling him Pinchas ben Elazar ben Aharon Hakohen. I vouch for him, said Hashem. He acted out of the motives of his paternal grandfather, Aharon, the ohev shalom v’rodef shalom, the lover of harmony who always strove to bring peace among the Jewish people and between them and Hashem. Hashem had to testify that the objectors were wrong because it’s a fact that anybody who would do such a thing for lesser motives would indeed be a common murderer.

The Mesillas Yesharim discusses the middah of kana’us  in the middah of Chassidus, to warn us that only a Chassid, a great baal madreigah, may carry out an act of zealousness. No one has a right to be zealous if he’s not a Chassid (observation of Harav Yechezkel Sarna, zt”l).

Hashem calls him Pinchas ben Elazar ben Aharon Hakohen, as if to say, here is the source of his zealousness. It did not come from a desire to hurt or destroy, but from a desire for peace. What is peace? Peace is not just the absence of strife and war. Peace means perfection and harmony, and sometimes you have to fight for it.

“Ein shalom omer Hashem l’resha’im,” for wicked people there is no peace, because they are out to destroy the harmony and perfection of the world. Therefore, sometimes to bring peace and harmony you have to fight wicked people and even destroy them. In our time, Chamberlain, who felt it was his mission to bring peace to the world, appeased Hitler — and caused the most horrendous destruction that ever was. Chamberlain’s mistake? It was appeasing an evil person instead of going to war to eliminate him. History might have taken a very different turn if…

Whom did Dovid Hamelech kill? Wicked people who were destroying the perfection and the harmony of the world; he brought perfection and harmony to the world by ridding it of these evil people. That was shalom achieved actively, aggressively; that’s a strong peace. Shlomo Hamelech, on the other hand, never faced strife or fought wars — his was a passive shalom. We see that  passive shalom couldn’t build a Beis Hamikdash that would be eternal, while an aggressive, active shalom would have been able to.

So Hashem testified that Pinchas was not motivated by negative feelings from the side of the family of Yisro, but just the opposite, from the side of the family of Aharon Hakohen. Aharon Hakohen’s hallmark was “oheiv shalom v’rodef shalom, oheiv es habriyos u’mekarven laTorah.” Aharon was the epitome of loving peace and harmony. This was what impelled Pinchas, and this is the first condition for legitimate kana’us.

The second condition for legitimate kana’us is based on “Pinchas ben Elazar Hakohen heishiv es chamasi me’ami Yisrael.” Pinchas’s act of zealousness achieved atonement and healing for the nation. A plague had afflicted them because of this terrible chillul Hashem, but Pinchas brought it to an end. He put the nation into a situation where they were better off, not worse.

The third condition is “b’kan’o es kinasi.” He didn’t do it to express his own feelings. It was My zealousness that he took upon himself; he was just an extension of Me. Harav Chaim Brisker explains that there are two kinds of kana’im — one fit and one unfit.

The zealot who acts l’shem Shamayim, thinking he has to eliminate the evil because otherwise it will cause havoc to the Jewish people, that zealout is justified. It’s clear that what Pinchas did caused a positive result in the world, not a negative one. He acted purely because that’s what the Ribbono shel Olam wants in a situation where the halachah allows him to act, in order that  “b’kan’o es kinasi b’socham v’lo chilisi Bnei Yisrael b’kinasi (Bamidbar 25: 10), to save the rest of the people.

Even though according to the halachah  a mumar, a person who is anti-Torah and spews heresy, should be killed by a kana’i, today that mitzvah does not apply. This is not because the Torah changed, but because who can be sure that he is on the madreigah of Pinchas to do it purely l’shem Shamayim?… And we certainly don’t condone what would be murder.

Why is there no mitzvah today to kill a mumar?

If somebody on a rooftop with a machine gun is spewing bullets at innocent people as they pass in the street, when all else fails a sniper is called in  and shoots him dead. Most people would consider the sniper a hero. He saved innocent lives.

Chazal say Gadol hamachti’o yoser min hahorgo, making someone sin is worse than killing him. Making someone sin kills the victim both in this world and in the next world as he robs the victim of his chelek l’Olam Haba too. Therefore, there was no mitzvah to take revenge on the Egyptians and the Edomim who tortured and killed us. But it was a mitzvah to take revenge on the Midyanim, who made us sin. So spiritual “bullets” are much more dangerous than physical bullets.

Every person who is that kind of rasha pollutes the world in a spiritual way.  Spiritual pollution wreaks havoc in the world, just like physical pollution.

Today we cannot understand this. People say, let him spew his apikorsus, how is he harming you? But do they say the same thing about spraying fluorocarbons into the atmosphere that affect the ozone layer and let radiation into the world to cause many cases of cancer, lo aleinu? Those who do it have to be stopped because it’s not their own private business.

The Chazon Ish said that when the Beis Hamikdash stood, it was obvious that sins caused damage and that people sinning   caused devastating results. But today we don’t seem to understand that cause-and-effect relationship.

In the 1960s when there were still few baalei teshuvah, a young man in Detroit became frum. After he became religious he realized that the conservative “rabbi” in the temple he grew up in had been misleading him all his life. So he went to the conservative temple on Shabbos and in the middle of the rabbi’s sermon shot him dead. No one said, “Good! He rid the world of a rasha spewing heresy!” No, everyone said the young man must have been deranged.

And the sniper who kills the shooter on the roof is considered a hero. This is why the halachah of kana’us is not applicable today.

When Pinchas did what he did, it was with lofty, altruistic reasons, in order to bring peace and harmony into the world. That kind of zealousness is sanctioned, but any zealousness that is missing any one of those conditions we listed above is simply murder.

What was Pinchas’s reward? Hin’ni nosein lo es brisi shalom (Bamidbar 25:12); he gets My covenant of shalom, because he brought shalom back into the world. And he atoned for the sin, so he became a Kohen, one of those who atone for the Jewish people middah k’neged middah.

If a  someone threatens your life you’re allowed to kill him first. You are allowed to defend yourself: that’s axiomatic and halachic and not in the realm of kana’us.

In war you’re allowed to kill enemy soldiers and even civilians if they threaten your life or are being used as human shields. But to kill a non-Jewish bystander who is not threatening you in some twisted version of kana’us is cowardly murder.  It is also a chillul Hashem, a very serious transgression. People who do that are rodfim, because they put all the Jewish people in danger.  As Yaakov Avinu said to Shimon and Levi when they killed the population of Shechem, maybe you thought you were justified but you put a sword into the hand of our  enemies, because they are going to say we are just murderers like they are and they can do to us as we do to others.

So these are all the reasons why what Pinchas did was positive and why he was rewarded for the deed of kana’us. But not one of them applies to the murder of an innocent, defenseless 16-year-old. So no one should dare equate with what those misguided murderers did with, l’havdil, what Pinchas did. By taking the law into their own hands they did something that not only doesn’t help the Jewish people but hurts us.

Baruch Hashem  no Jew that I know of came out and danced on the rooftops when they killed this boy.  That is the way of our enemies, not us. Rather, everybody from right to left castigated them in the strongest terms.

Certainly your life takes precedence over your enemy’s life and if he means to kill you you are authorized to fire the first shot. In addition, we are often authorized to take revenge on the murderers of our people, as well as on those who brought us to sin, as that’s the same thing as murder (as explained above). But kana’us is not our job today, because so-called kana’us today is adulterated and misdirected and doesn’t pass the Torah’s test for true motivation.

As we head into the portentous Three Weeks, hopefully, instead of nekamah will come nechamah and the world will reach  perfection and peace. May Moshiach come soon and we be zocheh to see a world of peace and harmony; the non-Jews will work with us and not against us; and we can all live together happily with the goal of serving the Ribbono shel Olam.

Rabbi Zev Leff is the Rav in Moshav Matityahu, Rosh Yeshivah and Rosh Kollel, Yeshiva Gedola Matisyahu and Kollel Matisyahu, as well as an international lecturer and published author.