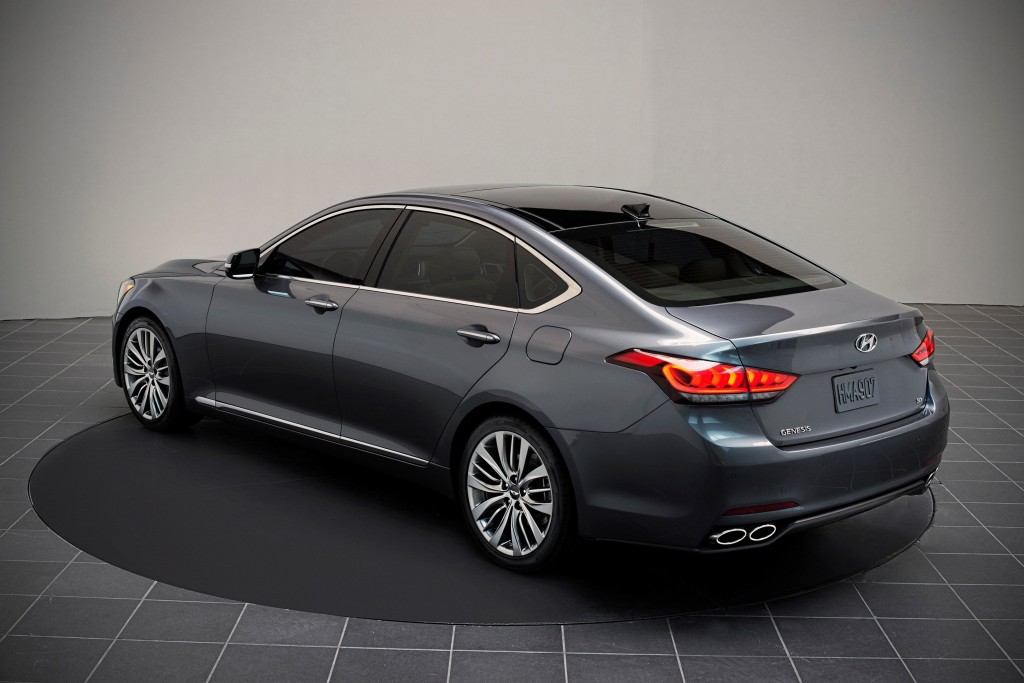 After years of worrying about the stuff that matters — comfort, reliability, quality — Hyundai focused on the superficial with its all-new Genesis luxury sedan.

The previous Genesis was a solid luxury car wrapped in a forgettable exterior, like a law-firm partner who shops at the Suit Barn. But the sleek styling of this new version, reimagined for 2015, puts all other luxury automakers — German or otherwise — on notice.

It’s refreshing and bold from every angle. A prominent nose up front, with a chrome grille descending toward the ground, is flanked by a pair of sleek, LED-trimmed headlights. Crisp lines flow toward the back of the car, where intricately detailed taillights slink around the corners.

It all adds up to a sedan that telegraphs your promotion to friends and neighbors.

Starting at $38,950, the full-size Genesis is Hyundai’s answer to a disparate group of luxury cars. They include the Chrysler 300, Lexus ES and GS, Lincoln MKS, Toyota Avalon, Cadillac CTS and Acura RLX.

The company also claims it’s after Mercedes E-Class and BMW 5-Series buyers, but that’s a bit of a stretch.

The Genesis debuted in 2008 as Hyundai’s first foray into luxury cars. Since then, it’s been eclipsed by the brand’s larger Equus, but in many ways, the rear-wheel-drive Genesis is more important to the Korean automaker. With just over 32,000 sales in 2013, the Genesis is a more common and approachable example of Hyundai’s luxury chops.

Styling aside, Hyundai didn’t mess much with the Genesis philosophy. It offers a V-6 or V-8 engine, an eight-speed automatic transmission, a comfortable and quiet interior, and a healthy list of standard features.

The most notable change is the addition of all-wheel-drive as a $2,500 option on V-6 models. Nearly every one of the Genesis’s competitors offers it, and Hyundai hopes the feature will grab a new group of luxury buyers in the Northeastern states who want the extra grip.

Our loaded V-6 tester came with the AWD system, and everything else in Hyundai’s options cabinet. This pushed the price tag to a bloated $52,450.

Frankly, it didn’t feel like a $52,000 car. But Hyundai says a majority of buyers won’t spend that much on its V-6. Most will drop an extra $4,000 on the Signature package (panoramic moon roof, ventilated front seats, blind-spot monitoring, Lexicon stereo, HID headlights) and call it a day.

Whatever the options, the inside of the Genesis is a nice place to spend some time (though it lacks the intangible panache of the German sedans).

There’s room for everyone everywhere, even though rear legroom shrank 3.5 inches. The ride quality is firm but comfortable.

The cabin keeps wind and road noise at bay, but one welcome sound comes from the engine, which rewards drivers with a throaty buzz when they lean on the throttle. And the ample power of the V-6 makes the V-8 option unnecessary.

The direct-injected 3.8-liter puts out 311 horsepower and 293 pound-feet of torque, delivered smoothly through an eight-speed automatic gearbox that’s as crisp as anything else in its class.

The AWD V-6 Genesis is rated at 16 mpg in the city and 25 on the highway. During a week of testing in mostly city driving, we averaged 16 mpg. The RWD model’s fuel economy is noticeably better, at 18 mpg city, 29 mpg highway.

Though the length of this Genesis is the same as its predecessor, Hyundai stretched the wheelbase by about 3 inches for a more confident grip on the road.

There are Sport and Eco modes that tailor the throttle, suspension, transmission and stability control to the driver’s liking. But the handling feels a bit muted. Blame the 150 to 300 extra pounds (depending on trim level) this new generation added to the outgoing model. Shoppers who put a premium on eager handling will probably favor the Cadillac CTS or Lexus GS.

The truly power-hungry Genesis fans (Hyundai estimates about 15 percent) have the 5.0-liter V-8 option. This model pumps 420 horsepower and 383 pound-feet of torque to the rear wheels via an eight-speed automatic transmission.

The V-8 Genesis starts at $52,450, and throws in freebies such as better leather seats, lane-keeping assist, adaptive cruise control and automatic emergency braking. Much of that high-tech safety gear is the kind that helped the 2015 Genesis grab a coveted Top Safety Pick Plus designation from the Insurance Institute for Highway Safety.

But the styling is the biggest step forward for Hyundai’s luxury ambitions. The brand cleverly wrapped head-turning looks around a car that otherwise stays true to a proven formula, and that should be enough to get more of them out the dealership doors.