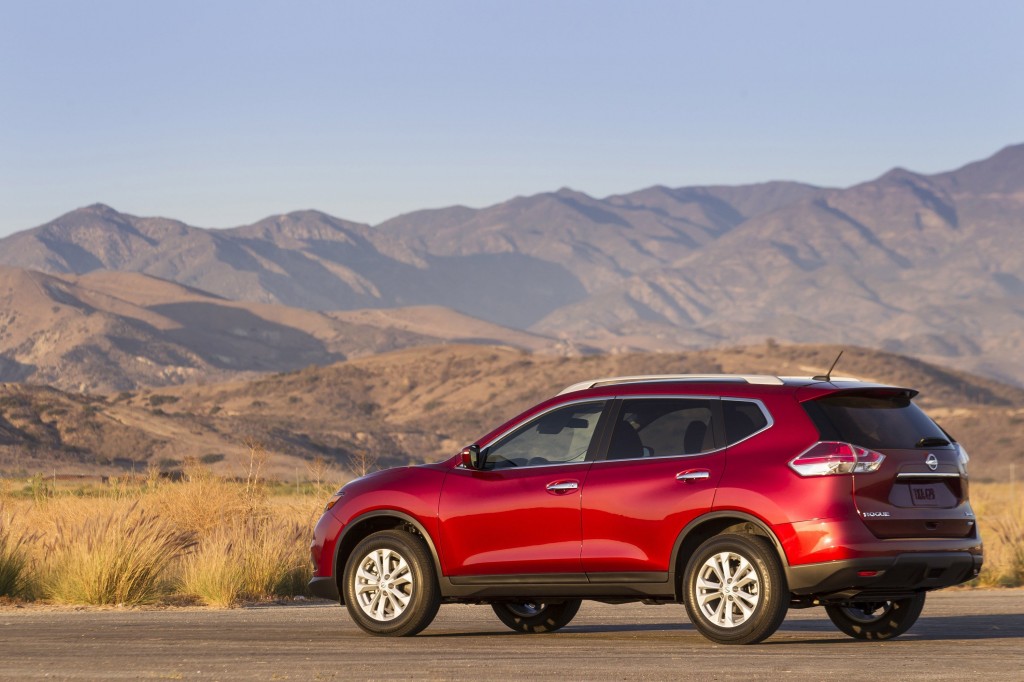 The three-star 2014 Nissan Rogue combines a roomy interior and high fuel economy in a five-passenger midsize crossover SUV with loads of practical appeal, but little to attract drivers looking for fun.

Midsize crossovers are among America’s most popular vehicles. Their combination of room, fuel efficiency, all-wheel-drive and style appeals to buyers of all ages.

Rogue prices start at $22,700 for a base front-wheel-drive model. All-wheel-drive models start at $24,140. A 170-hp, four-cylinder engine and continuously variable automatic transmission are standard on all Rogues. I tested a well-equipped Rogue SL AWD. It had leather upholstery, Bose audio, Bluetooth audio and phone compatibility, a large power sunroof, navigation system and more. It cost $32,165. All prices exclude destination charges.

The Rogue separates itself from the crowd with outstanding fuel economy and a very roomy and practical interior.

The Environmental Protection Agency rates the 2014 Rogue AWD at 25 mpg in the city, 32 on the highway and 28 in combined driving. The combined rating beats the competition by anything from 3 to 7 mpg. That’s an exceptional margin in such a competitive segment.

Nissan achieved that impressive victory at least in part by prioritizing fuel economy above acceleration. My Rogue struggled to merge with fast-moving traffic. Passing and even keeping pace on the highway was no picnic, either. Acceleration from zero to 15 or 20 mph was okay, making the Rogue well suited for neighborhood jaunts.

The Rogue’s 170 horsepower trails the competitors, while my test vehicle’s 3,605-lb. curb weight was one of the higher in the group. It had the worst weight-to-power ratio of the lot.

In addition to that disadvantage, the CVT is clearly tuned for efficiency, not acceleration. The drivetrain produces more noise than speed when the accelerator is floored, as I learned when I repeatedly misjudged the Rogue’s ability to merge into traffic.

The interior is roomy, comfortable, attractive and nicely equipped. The leather upholstery and soft-touch materials in my high-end tester looked and felt terrific. The meeting points of a couple of trim pieces were uneven, but there are plenty of bins and cubbies to hold phones, glasses, cups, etc.

The voice-recognition system has excellent comprehension, but took more steps than the quickest systems.

The rear seat is surprisingly roomy, with plenty of head and leg room. An optional model has a third row to hold up to seven people, but it reduces individual space and cargo room, two of the Rogue’s strengths.

The 32-cubic-foot cargo space provides plenty of room. A very useful pair of adjustable floor panels lets you configure the cargo area by easily creating a shelf or a divider.

The Rogue’s handling is workmanlike. Steering effort varies with vehicle speed, but there’s not much feel. The suspension absorbs bumps well, but does not encourage enthusiastic driving. Like its drivetrain, the Rogue’s dynamics reward practicality, not enthusiasm.

The optional lane-departure warning was too sensitive for my taste. At highway speeds, it was continually chiming. I turned it off after a few miles, and never missed it. The optional blind-spot and collision alerts worked well.

The 2014 Rogue’s styling is new and attractive. A roughly V-shaped grille replaces the spindle shape Nissan pioneered and Lexus appropriated. Chevron-shaped LED running lights frame the grille. The sides feature a dynamic line that runs above the wheel wells from the headlights to the tailgate.

It’s an appealing and comfortable package, loaded with plenty of appealing features. Shoppers who prize fuel economy and interior space above driving fun should definitely check out the 2014 Nissan Rogue.