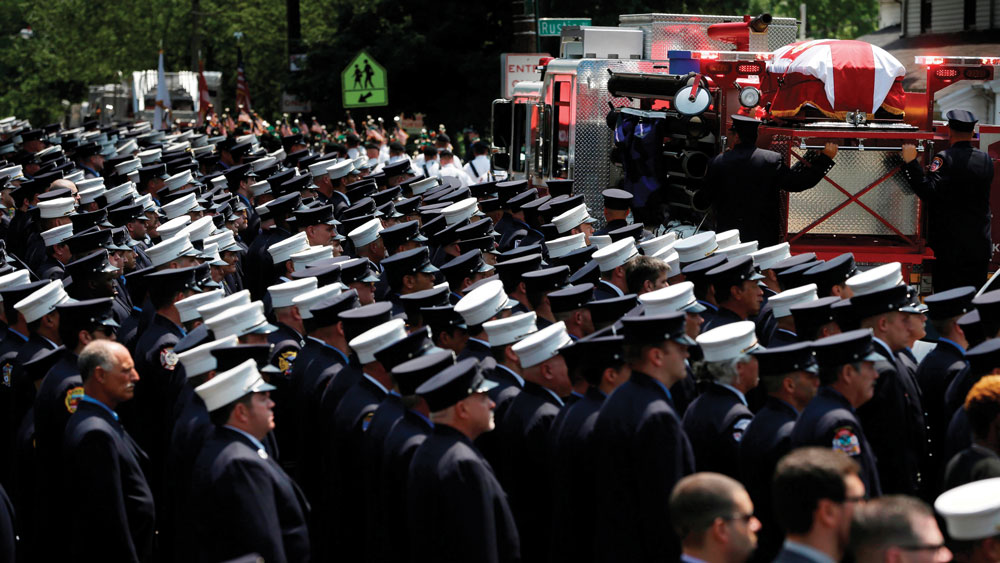 Thousands of uniformed firefighters from across the country lined up for miles Thursday at the funeral of a fireman who the mayor called “a true hero.”

Mayor Bill de Blasio said during his eulogy that the 40-year-old FDNY veteran was dedicated, hardworking, kind and, above all, a family man. That theme was poignantly accentuated when fire helmets from Ambelas’s old commands were placed on the heads of his daughters Gabriella, 8, and Giavanna, 5.

While “no one feels it more than the family that has suffered this loss,” said the mayor, “all members of the FDNY — but really, all New Yorkers — are feeling this moment with pain and sadness, because we’ve lost a true hero.”

Ambelas had been promoted to lieutenant 10 months ago. Throughout his career he helped the city through its darkest hours, including the recovery from the Sept. 11, 2001, terrorist attacks and Superstorm Sandy. Just two weeks ago he was honored by the Williamsburg Jewish community for saving a boy who got stuck in a roll-up gate.

“He was so fundamentally brave, reaching a level of bravery that few citizens can even imagine,” de Blasio said. “Anyone who worked alongside Matt could tell you that. They saw it during the horror of 9/11. They saw it in all the confusion and devastation after Sandy hit. They saw it just in this month of May, a few months ago, when Matt’s calm, quick thinking saved a 7-year-old boy who was caught in a roll-up gate, nearly crushed. But Matt stepped in at the right moment and saved that child.”

Firefighters from Boston, Philadelphia and St. Louis were among those who traveled great distances to salute Ameblas’ casket. It was lowered from a caisson draped in a department flag and taken into a Staten Island church by pallbearers, followed by his wife, Nanette, and their little girls.