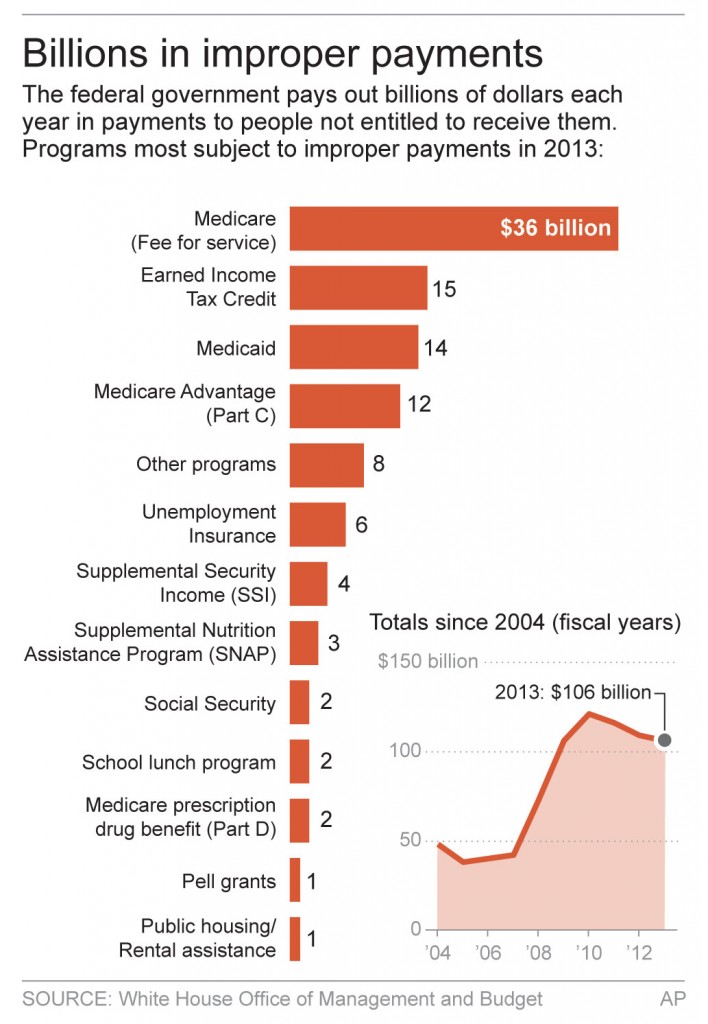 Tax credits for families that don’t qualify. Medicare payments for treatments that might not be necessary. Unemployment benefits for people who are secretly working. Federal agencies reported making $100 billion in payments last year to people who may not have been entitled to receive them.

Congressional investigators say the figure could be even higher.

“The amounts here are absolutely staggering,” said Rep. John Mica, R-Fla. “It’s over $100 billion each of the last five years. That’s a staggering half a trillion dollars in improper payments.”

Each year, federal agencies are required to estimate the amount of improper payments they issue. They include overpayments, underpayments, payments to the wrong recipient and payments that were made without proper documentation.

Some improper payments are the result of fraud, while others are unintentional, caused by clerical errors or mistakes in awarding benefits without proper verification.

In 2013, federal agencies made $97 billion in overpayments, according to agency estimates. Underpayments totaled $9 billion. That adds up to $106 billion in improper payments, or 3.5 percent of all the payments made by the federal government.

“We have taken an aggressive approach to attacking waste, fraud and abuse within federal agencies, and we will continue to seek out new and innovative tools to help us in this fight,” Cobert told the subcommittee.

However, a new report by the Government Accountability Office questions the accuracy of agency estimates, suggesting that the real tally could be higher. The GAO is the investigative arm of Congress.

“The federal government is unable to determine the full extent to which improper payments occur and reasonably assure that appropriate actions are taken to reduce them,” Beryl H. Davis, director of financial management at the GAO, told the subcommittee.

Davis said some agencies don’t develop estimates for programs that could be susceptible to improper payments. She also said estimates by the Defense Department “may not be reliable.”

The Pentagon estimates that less than 1 percent of its payments are improper. However, the GAO found last year that the Pentagon’s estimates for 2011 “were neither reliable nor statistically valid because of long-standing and pervasive financial management weaknesses.”

“We have reason to believe that the numbers are sound, but we certainly understand why the skepticism exists,” Mark E. Easton, the Defense Department’s deputy chief financial officer, told the subcommittee.

“I hope you won’t stand too strongly behind your numbers,” Rep. Gerald Connolly, D-Va., replied.

The largest sources of improper payments are government health care programs, according to agency estimates. Medicare’s various health insurance programs for older Americans accounted for $50 billion in improper payments in the 2013 budget year, far exceeding any other program.

Most of the payments were deemed improper because they were issued without proper documentation, said Shantanu Agrawal, a deputy administrator for the Centers for Medicare & Medicaid Services. In some cases, the paperwork didn’t verify that services were medically necessary.

“Payments deemed ‘improper’ under these circumstances tend to be the result of documentation and coding errors made by the provider, as opposed to payments made for inappropriate claims,” Agrawal told the subcommittee.

Among other programs with large amounts of improper payments:

– The earned income tax credit, which provides payments to the working poor in the form of tax refunds. Last year, improper payments totaled $14.5 billion. That’s 24 percent of all payments under the program.

The tax credit is one of the largest anti-poverty programs in the U.S., providing $60.3 billion in payments last year. Eligibility depends on income and family size, making it complicated to apply for the credit – and difficult to enforce – Koskinen said.

People get credits they don’t deserve by claiming children they don’t have or misreporting their income or filing status, Koskinen said.

The IRS prides itself on issuing most tax refunds within three weeks, often before the agency gets wage and other financial information from employers and banks. To combat fraud, the IRS has asked Congress to make employers and banks submit this information more quickly. The IRS also wants more authority to correct errors on tax returns without doing a full audit.

Medicaid, which is run jointly by the federal government and the states, has seen a steady decline in improper payments since 2010, when they peaked at $23 billion.

– Unemployment insurance, a joint federal-state program that provides temporary benefits to laid-off workers. Amount of improper payments last year: $6.2 billion, or 9 percent of all payments under the program.

The Labor Department said most overpayments went to people who continued to get benefits after returning to work, or who didn’t meet state requirements to look for work while they were unemployed. Others were ineligible for benefits because they voluntarily quit their jobs or were fired.