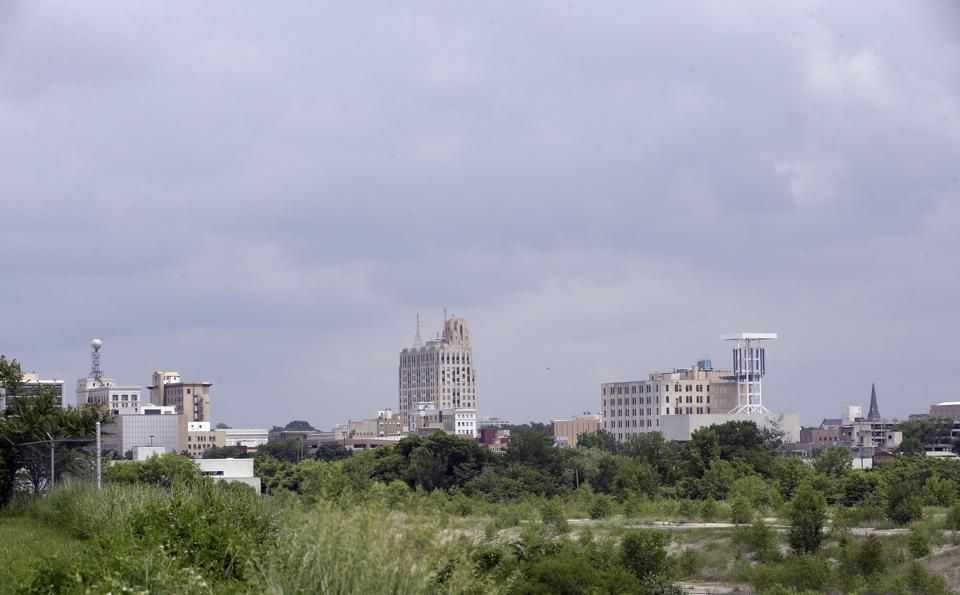 As Detroit struggles to climb out of bankruptcy, another Michigan city with strong ties to the auto industry may be about to fall into the same hole.

Flint, the birthplace of General Motors that once had 200,000 residents, has also endured a spectacular drop in population and factory jobs and a corresponding rise in property abandonment, much like its insolvent big brother an hour’s drive south.

If a judge rules against Flint’s effort to cut its retiree health care benefits, the city is expected to join about a dozen cities or counties that have sought help from the courts since the start of the recession.

“If we don’t get any relief in the courts … we are headed over the same cliff as Detroit,” said Darnell Earley, the emergency manager appointed by Gov. Rick Snyder to manage Flint’s finances. “We can’t even sustain the budget we have if we have to put more money into health care” for city workers.

Before Detroit, the largest local-government bankruptcy filing was in Jefferson County, Alabama, in November 2011. The county emerged last year after reorganization of its $4 billion in debt. Court proceedings continue for the California cities of Stockton, San Bernardino and Mammoth Lakes, all of which filed in 2012.

The greatest threat of new cases may be in Michigan, where about a dozen cities and four school districts are under state control. The state unemployment rate is still 7.3 percent, and some entities remain saddled with underfunded pension plans.

That Flint might follow Detroit, which filed in July 2013, isn’t surprising, given their shared circumstances. Both were once boomtowns brimming with auto jobs for collars white and blue. General Motors employed about 80,000 in the area in the early 1970s. But fewer than 8,000 GM jobs remain, and the city’s population has fallen to just below 100,000.

Today, the city is a mixed picture of hope and desolation. Downtown bustles with people going to government offices, the growing University of Michigan branch campus and businesses along red-brick-paved Saginaw Street, which features several striking iron arches that span the roadway and are replicas of those from a century ago.

But on the edge of the business district, overgrown lots and boarded-up buildings creep in, and empty houses outnumber occupied ones in some residential areas.

Flint’s budget deficit is about $12.9 million, and the city will have to come up with $5 million this fiscal year unless most retirees begin paying more for health benefits and absorb higher deductibles and co-pays, Earley said.

While the bankruptcy risk remains until the case ultimately is settled, the city received a temporary reprieve last week, when a federal judge allowed it to implement cuts for the current fiscal year budget. While city officials expressed relief, “the real fundamental, underlying question about the ability of a municipality to alter retiree health care benefits has not been answered,” said Gerald Ambrose, Earley’s financial adviser.

Leon Noack, 75, who retired in 1985 as assistant fire chief, said the city is dictating terms with little chance for negotiation.

“I feel sorry for the city that they’re in this bind, don’t get me wrong. I understand they need help. But the way they’re going about it is just not right,” said Noack, who said he lives on his $2,200-a-month pension.

In Detroit, workers and retirees are voting on a settlement offer before a federal judge reviews the city’s reorganization plan this month.

Among cities in financial peril, “Flint is the obvious one (to watch) right now,” said Eric Scorsone, an economist at Michigan State University who has studied municipal insolvency.

Earley said he has no choice: “It was a lot easier when we had 200,000 people. Now, it’s not the same number of people, but it’s the same delivery systems. It’s just like any other cost passed on to consumers.”

Flint’s city workers, he added, cannot expect the kind of settlement Detroit workers were offered. Philanthropists kicked in $366 million and the state appropriated $195 million to keep the city from liquidating the collection of the Detroit Institute of Arts.

Flint doesn’t have that leverage.

“I don’t think they’re going to quite have the ‘grand bargain’ Detroit has,” Scorsone said. “Detroit’s got everyone’s attention. You’re not going to get that in Flint. … It doesn’t carry the same resonance nationally.”