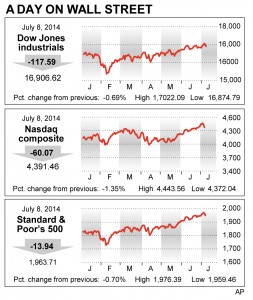 Investors unloaded stocks for a second straight day ahead of a slew of corporate earnings that will help them determine whether a recent run-up in the market is justified.

The selling Tuesday follows record closes last week. The Dow Jones industrial average ended below 17,000, a level it topped Thursday for the first time in its 118-year history.

Internet companies bore the brunt of the declines. Among the biggest losers were Twitter and Pandora Media, a music streaming service, down 7 percent each. Facebook and Netflix each dropped more than 3 percent. The Nasdaq composite fell 1.4 percent, its biggest slide in two months.

The winners of the day were utilities, considered a safe choice in uncertain times and attractive because of their steady dividends. That sector rose 0.6 percent, the only one of the 10 in the Standard and Poor’s 500 index that finished higher.

The selling this week is not surprising given the S&P 500’s near tripling in price since its March 2009 low, said Randy Frederick, managing director of trading and derivatives at the Schwab Center for Financial Research. He also noted that the bull market has lasted more than five years, the fourth longest since World War II.

“The longer it gets out of line with historical patterns,” he said, “the closer we get to fizzling out.”

As companies begin reporting second-quarter results this week, investors will be looking for signs that the strengthening U.S. economy has translated into a surge in profits. Expectations are for a 6.6 percent gain over the year earlier, double the increase in the first quarter, according to S&P Capital IQ, a research firm.

Among S&P 500 sectors, telecommunications companies fell the most, 1.5 percent.

Steven Ricchiuto, senior economist at Mizuho Securities, thinks signs that the global economy is slowing have added to investor jitters. On Tuesday, Germany reported that exports fell more than expected in May and the United Kingdom said manufacturing output dropped 1.3 percent that month.

“The global economy is taking a hit today,” Ricchiuto said. “Global growth is decelerating. It may actually be stalling.”

The U.S. earnings reporting season got started after the closing bell Tuesday when aluminum maker Alcoa reported results that were better than investors expected. Wells Fargo, the No. 1 home mortgage lender in the U.S., reports on Friday.

Companies were hit hard in the first quarter by cold winter weather. But financial analysts expect earnings growth to accelerate for the rest of the year, topping 11 percent in the fourth quarter.

Among stocks making big moves Tuesday, drugmaker AbbVie fell $1.71, or 3 percent, to $55.69 following news that it raised its offer to buy another drug company, Shire. The target, known for its rare-disease drugs, has rejected three AbbVie offers.

This article appeared in print on page 30 of the July 9th, 2014 edition of Hamodia.