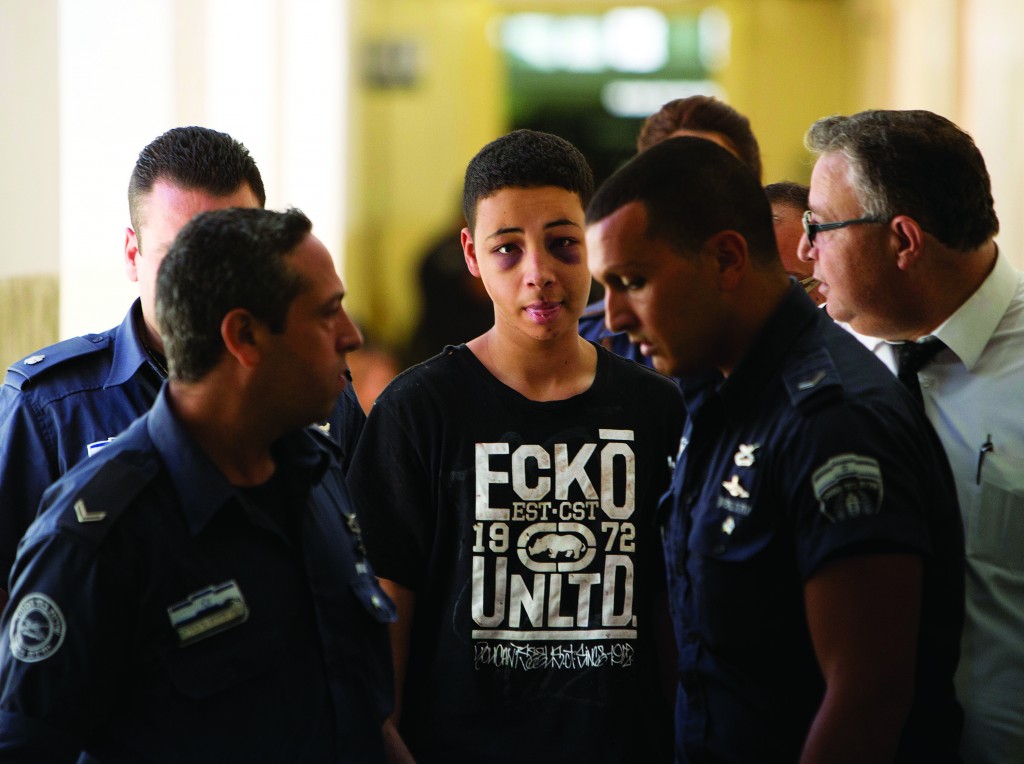 Even while Israel was still searching, hoping and praying for the safe return of Gilad Shaar, Naftali Frankel and Eyal Yifrach, somehow The New York Times found a way to blame the victims:

After their bodies were found in a ditch, the Times managed to blame their deaths — not on the bloodthirsty murderers, but as a direct result of Israel not embracing the new Palestinian government of Abbas and Hamas:

“The June 12 abduction and its aftermath, after April’s collapse of American-brokered peace talks, have sent the Israeli-Palestinian conflict to its most precarious point in nearly a decade and shaken the fragile reconciliation between the Palestine Liberation Organization and Hamas.”

How dare those three boys hitch home for Shabbos and threaten the shalom bayis of the new Palestinian coupling!

Just when you thought the Times had sunk to the lowest depths of slurnalism, they outdo themselves.

The front page of The New York Times, Monday, July 7 edition is dominated by a large photo. Take a quick look, and you might think that the coaches of a high school football team were giving the left guard a hard time for blowing a play just because he got roughed up a bit. The boy in the large feature photo certainly doesn’t look like the victim of brutal violence.

But the caption and the accompanying right-column article tell a vastly different story. The caption reads, “Tariq Abu Khdeir, 15, arrested in the unrest, is a cousin of the victim and was shown on a video being beaten by Israeli officers.”

Just parenthetically, I don’t remember seeing after the abduction of the three yeshivah boys that the Times gave it major coverage on the front page. Those boys were buried by the Times.

But why was Tariq “arrested in the unrest”? From the wording, you might think he was an innocent bystander — a New York tourist trying to take in some local color and excitement. Somehow the fact that he was throwing rocks at Israeli police got lost in the telling.

Rocks may not have the range of guns, but they are also deadly weapons.

In the body of the story itself, the writer, Isabel Kershner, twists and turns the facts until, in an exquisite display of Orwellian newspeak, she completely turns truth inside out. For the Times, when it is against Israel, “War is peace.”

Under the headline, “6 Israelis Held Over the Killing of a Palestinian,” and the subhead, “Revenge Seen as Motive,” Kershner pirouettes, circumlocutes and spins the news like a whirling dervish.

It is worth noting that, on the same day, The Wall St. Journal carried a brief on the front page that led to a half-page story on page 6. The story concludes with a mention of Tariq, the Times’ poster child, “who is an American citizen and lives with his family in Florida.” It doesn’t mention how or why he was at the scene in Israel, but it says:

“At a hearing in Jerusalem on Sunday, his face was black and blue. Palestinians have distributed a video showing the teenager being pummeled by police and dragged unconscious to a police car. The police say the video had been doctored and misrepresents what transpired.”

The article in the Times begins: “Confronting the possibility of rising retaliatory violence between Jews and Palestinians, the Israeli authorities arrested six Israelis on Sunday in the killing of a Palestinian teenager, found beaten and burned in a Jerusalem forest last week.”

Reading between the lies, one might believe that the one and only reason Israel arrested the murderers of Muhammad Abu Khdeir was to prevent “retaliatory violence.” As if Israel weren’t the only country in the Middle East that actually has a system of justice.

It gets worse: “After days of near silence about the case, Prime Minister Benjamin Netanyahu condemned what he called a horrific crime and pledged that anyone found guilty would ‘face the full weight of the law.’”

Is a Prime Minister of a country under attack required by international law to go public about criminal investigations that could be just the spark needed to set off the tinderbox of Palestinian violence?

In the lopsided mathematics of Times moral equivalency, Ms. Kershner pontificates, “In the wave of outrage after Muhammad’s killing, Palestinian youths have clashed with Israeli security forces in East Jerusalem and the Galilee in scenes reminiscent of the Palestinian uprisings in 1987 and 2000. The killings on each side — and the subsequent arrest of the Palestinian’s American cousin, whose beating by the Israeli police was caught on video — have raised the specter of the broader conflict’s descending into a cycle of personal vendettas and bloodletting.”

Once again, Israel seeking the killers of three yeshivah students whose only crime was that they were Jews living in Eretz Yisrael, and the country defending itself against rocket barrages on civilian towns is, somehow, the equivalent of tribal warfare and vendettas.

Times change. But the Times doesn’t change. Truth has never been a value at The New York Times. In August 1991, as mobs rampaged in Crown Heights, the Times sent a young religion editor named Ari Goldman to cover the riots and send back stories for “rewrite” in the newsroom.

When Goldman saw the paper the next day, he was horrified by how they distorted the reports he filed.

“And, worse,” wrote Goldman in The Jewish Week, 20 years after the riots, “I read an opening paragraph, what journalists call a ‘lead,’ that was simply untrue: ‘Hasidim and blacks clashed in the Crown Heights section of Brooklyn through the day and into the night yesterday.’”

In all his reporting during the riots, Goldman said he never saw — or heard of — any violence by Jews against blacks.

“But The Times was dedicated to this version of events: blacks and Jews clashing amid racial tensions.”

So firmly and deeply did the editors at The Times believe their own narrative, that they couldn’t see anything else. Don’t confuse the issue with facts.

After Goldman heard rioters screaming “Heil Hitler,” and “Death to the Jews,” he saw rioters throwing rocks and bottles, and a chassidic man falling to the ground after getting hit. Seeing that some people ran to the man’s aid, Goldman ran for a payphone. Shaking with rage, he yelled at his editor:

“You don’t know what’s happening here! I am on the streets getting attacked. Someone next to me just got hit. I am writing memos and what comes out in the paper? ‘Hasidim and blacks clashed’? That’s not what is happening here. Jews are being attacked! Yougot this story all wrong. All wrong.”

Even after Goldman’s outburst, the Times still managed to find moral equivalence in the tragic traffic accident that killed a black child — 7-year old Gavin Cato, and the pogrom that climaxed in the wanton stabbing murder of Yankel Rosenbaum.

The distortions are overwhelming, or should I say Orwellming.

The New York Times reinvents the past, present and future. This is the Times that tries men’s souls.

The Old Gray Lady might be gray, but she ain’t no lady.