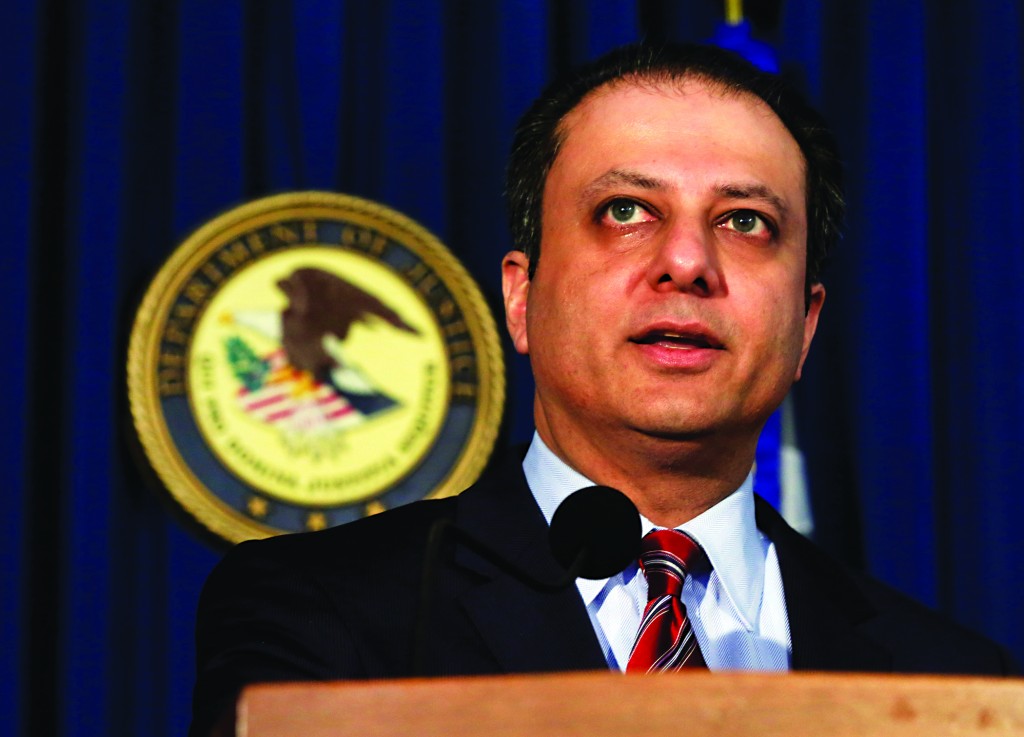 After years of silence on the issue, India-born U.S. Attorney Preet Bharara has begun to open up about the cultural scorn he has faced over his high-profile prosecutions of South Asian defendants, particularly that of an Indian diplomat that led to one commentator in India to call him an “Uncle Tom.”

In a recent speech at Harvard Law School, he noted the criticisms and countered them with unusual candor. Citing one commentator in India who questioned if he took up the diplomat case “to serve his white masters,” Bharara quipped about who those white masters might be.

But the prosecutor also conceded that the uninvited scrutiny has been painful. It reached a fever pitch after the December arrest of a mid-level Indian diplomat on charges she underpaid a domestic worker. Much of the furor in the case against Devyani Khobragade, India’s deputy consul general in New York, focused on the fact that she had been body-searched, which was viewed in India as degrading and unnecessary. Soon afterward, she was permitted to return to India, though charges remain.

“Talk show hosts in India took to calling me a self-loathing Indian who made it a point to go after people from the country of his birth. Which was a bit odd, since the alleged victim was also Indian,” Bharara recalled.

Bharara said the criticism “might not have bothered me so much except that it bothered my parents. I had to explain to my daughter, who overheard a conversation in the house, what it meant to be called an Uncle Tom.”

Preetinder Bharara was born in Ferozepur, India, in 1968. His family moved to the U.S. when he was 2, and he was raised along the New Jersey shore. After graduating from Harvard and Columbia Law School he became an an assistant U.S. attorney in Manhattan.

Soon after his 2009 appointment as U.S. attorney in Manhattan, he presided over one of the largest roundups in Wall Street in history, which resulted in more than 80 convictions.

But his prosecution of some fellow highly successful South Asians strained perceptions of him in his birthplace even before the diplomat’s arrest. Three years ago, his office successfully prosecuted Raj Rajaratnam, of Sri Lanka, along with some of Rajaratnam’s India-born friends from college. He also prosecuted several highly successful Indian-born defendants, the most prominent of which is Rajat Gupta, the former Goldman Sachs board member who rose to the peak of American finance before he was convicted for insider trading.

The uproar over the arrest of India’s deputy consul general in New York turned whispers about his motivations into shouts.

“Is Bharara targeting Indians?” was the question posed by an article on India Today’s website in December. Firstpost.com Editor-in-Chief R. Jagannathan wrote in a December column that the United States “will use a Preet Bharara to target Khobragade (or Rajat Gupta or Raj Rajaratnam) so that it looks like Indian-Americans are implementing the law, and hence not racist.” He finished the column with: “At the very least, we should target Preet Bharara for humiliating an Indian diplomat and make sure he never enters this country again.”

The criticism was like nothing that had ever fallen upon a Manhattan prosecutor. Rudy Giuliani’s Italian-American background drew no such attention from Italy as his office arrested scores of defendants in organized crime cases.

Columbia Law Professor John C. Coffee Jr. said the reaction against Bharara is, in part, a function of the U.S. separation of powers that is unlike that in countries such as India.

“I don’t think that foreign countries, foreign nationals, foreign defendants, quite understand how independent and separated the Department of Justice and particularly U.S. attorneys are,” he said. “Usually a government controls everything.”

In his May 28 speech at Harvard, Bharara said he eventually recovered perspective as the accusations got increasingly absurd.

“After all, Indian critics were angry because even though I hailed from India, I appeared to be going out of my way to act American and serve the interests of America. Which was also kind of odd, because I am American and the words ‘United States’ are actually in my title,” he said.