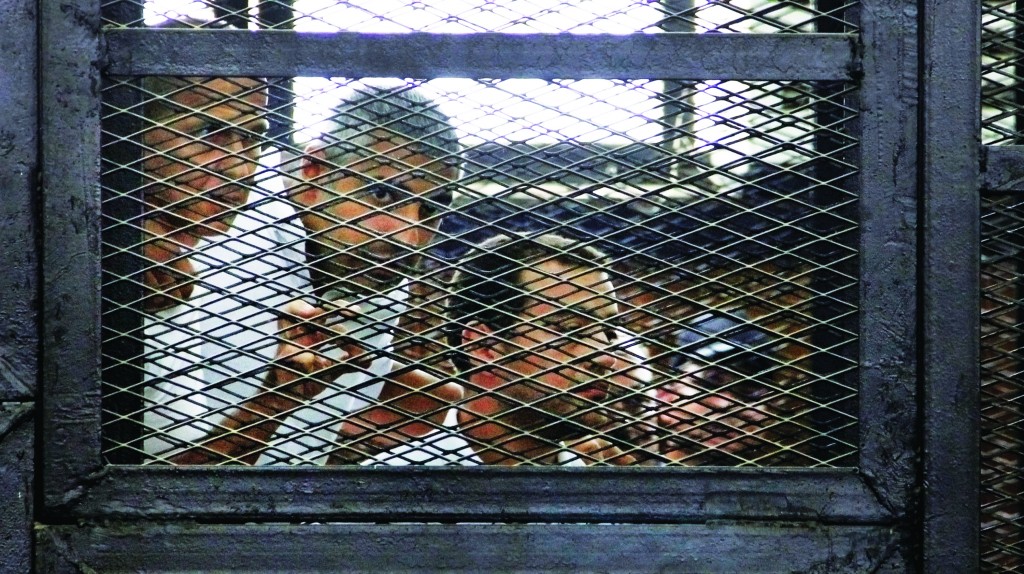 Three Al Jazeera journalists were jailed for seven years each by an Egyptian judge on Monday, in what Washington called “chilling, draconian sentences” that must be reversed.

Cairo defended the journalists’ convictions — for aiding a “terrorist organization” — and rejected the widespread condemnation as “interference in its internal affairs”.

The third defendant, Egyptian producer Baher Mohamed, was given an extra three years for possessing a single bullet, at the hearing attended by Western diplomats, some of whose governments summoned Egypt’s ambassadors over the case.

The men have been held at Egypt’s notorious Tora Prison for six months, with the case becoming a rallying point for rights groups and news organizations around the world.

They were detained in late December and charged with helping “a terrorist group” — a reference to the Muslim brotherhood — by broadcasting lies that harmed national security and supplying money, equipment and information to a group of Egyptians.

The Brotherhood was banned and declared a terrorist group after the army deposed elected Islamist president Mohamed Mursi in July 2013 following mass protests against his rule.

Al Jazeera, whose Qatari owners back the Brotherhood and have been at odds with Egypt’s leadership, said the ruling defied “logic, sense and any semblance of justice.” “There is only one sensible outcome now. For the verdict to be overturned, and justice to be recognized by Egypt,” Al Jazeera English managing director Al Anstey said in a statement.

The ruling came a day after Secretary of State John Kerry met newly elected Egyptian President Abdel Fattah al-Sisi in Cairo and raised the issue of the journalists.

On Monday, Kerry said he called Egypt’s foreign minister to register his “serious displeasure” at the “chilling, draconian sentences.”

“Injustices like these simply cannot stand if Egypt is to move forward in the way that President al-Sisi and Foreign Minister [Sameh] Shoukry told me just yesterday that they aspire to see their country advance,” Kerry said in a statement.

The court descended into chaos as the verdict was read out. Near tears, Greste’s brother Michael said: “This is terribly devastating. I am stunned, dumbstruck. I’ve no other words.”

The three men had looked upbeat as they entered the courtroom in handcuffs, waving at relatives who had earlier told journalists they expected them to be freed for lack of evidence.

One Dutch woman and two Britons were sentenced to 10 years in absentia on the same charges of aiding a “terrorist group.”