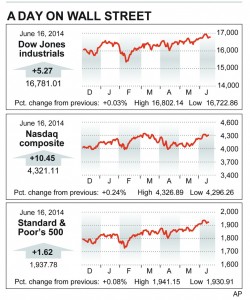 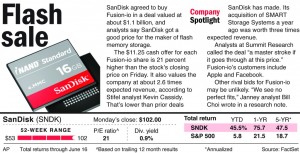 Investors nudged U.S. stocks into positive territory Monday, thanks in part to another round of corporate couplings.

Three proposed acquisitions, including medical device maker Medtronic’s $42.9 billion bid for rival Covidien, helped the market eke out a slight gain for the second trading day in a row.

Homebuilding stocks also got a boost from a survey showing that U.S. homebuilders’ outlook on the housing market improved this month.

Stocks mostly hovered between small gains and losses through much of the day as traders monitored the conflict in Iraq and considered its potential impact on oil prices.

Williams Cos. hit an all-time high after the pipeline operator agreed to buy a part of natural gas processor Access Midstream Partners for nearly $6 billion. Williams vaulted $8.84, or 18.7 percent, to $56.02.

The market was still heading for a loss in the final hour of trading, then recovered within the last 10 minutes.

Bond prices were flat. The yield on the 10-year Treasury note held steady at 2.60 percent.

The market has been sluggish in recent months, even as investors have had more than a few geopolitical concerns to worry about. Earlier this year, it was currency concerns in Turkey and then the fallout from Russia-Ukraine tensions. Last week, the insurgency in Iraq erupted, causing a spike in oil prices.

Still, the day-to-day market swings have been mostly minor.

“That lack of volatility is something we have not seen since 1995,” he said. “You can call it complacent, or non-volatile or sluggish, but certainly this is a different environment than we’ve seen for quite some time.”

At the same time, a flurry of merger news has helped lift stocks in recent weeks, a trend that underscores that stocks are not seen as expensive right now.

There was also encouraging news on the housing market.

The National Association of Home Builders/Wells Fargo builder sentiment index rose this month to the highest level since January. The latest report suggests homebuilders’ confidence in the housing market is improving.

Investors will be looking ahead this week to what the Fed will say on Wednesday, when it wraps up its latest two-day meeting of its policymaking committee.

“Where we’ll see risk injected [into the market] will be if there’s anything but a rubber stamp of the Fed waiting until next year to raise rates,” he said.

This article appeared in print on page 8 of the June 17th, 2014 edition of Hamodia.