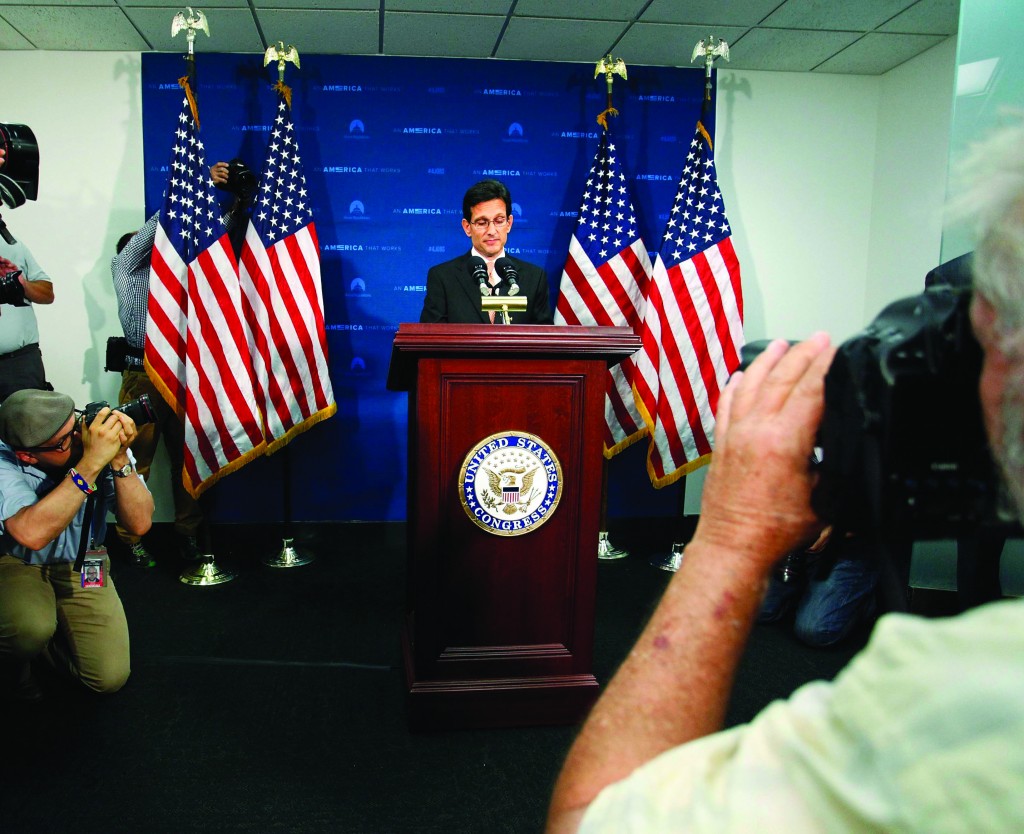 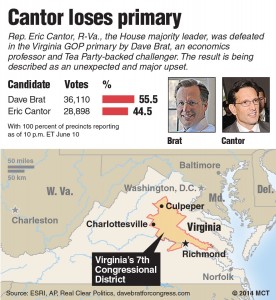 Repudiated at the polls, House Majority Leader Eric Cantor announced Wednesday that he will resign his leadership post at the end of next month, clearing the way
for a potentially disruptive Republican shake-up just before midterm elections with control of Congress at stake.

Cantor informed fellow Republicans of his intentions at an emotional closed-door meeting, then made his public announcement at a news conference where he appeared upbeat, all less than 24 hours after losing a primary election to David Brat, a little-known and underfunded rival backed by tea party groups.

Lawmakers in both parties
said Cantor’s defeat and the prospect of a change within the Republican high command probably signal the demise of immigration legislation along the lines President Barack Obama is seeking and will also have a negative impact on the balance of his second-term agenda.

Even so, White House spokesman Josh Earnest disputed the notion that Cantor’s surprise loss crushed the prospects of House Republican leaders putting an immigration bill on the floor this year. He noted that Sen. Lindsey Graham (R-S.C.) had been deeply involved in passing the Senate immigration bill and still defeated his primary opponents Tuesday night.

Cantor also has been deeply involved in GOP attempts to develop an alternative to the health care law that Republicans want to repeal.

Even before Cantor’s announcement, jockeying had broken out among fellow Republicans eager to move up the House leadership ladder — or establish a foothold on it.

Rep. Kevin McCarthy of California, the party whip and third-ranking leader, informed fellow Republicans he intended to run to succeed Cantor. Rep. Pete Sessions of Texas also made clear his interest, but fellow Texan Jeb Hensarling eyed a candidacy, as well, and the state’s delegation was working to prevent any intramural competition.

Cantor, 51, sounded like anything but a man ready to retire from politics, saying he will serve out his term and be active this fall for Republican candidates.

“What divides Republicans pales in comparison to what divides us as conservatives from the left and their Democratic” allies, he said.

Accused by tea party critics of being too accommodating on immigration and other issues, and criticized by Democrats for being inflexible, Cantor said he had struck the right balance. “I think that this town should be about trying to strike common ground,”he said.

The resignation would mark a swift end to a quick rise to power for Cantor, 51, who was elected to Congress in 2000, was appointed to the leadership two years later, and then rose steadily to become the second-most powerful Republican in the House. In that post, he was the most powerful Jewish Republican in Congress, and occasionally was seen as a potential rival to Speaker John Boehner but more often as a likely successor.

Brat campaigned as a foe of immigration legislation, and said Cantor was likely to help immigrants living in the United States illegally gain amnesty if given a new term in the House.

Already on Wednesday, Hillary Rodham Clinton, a potential Democratic contender, said Cantor “was defeated by a candidate who basically ran against immigrants.”