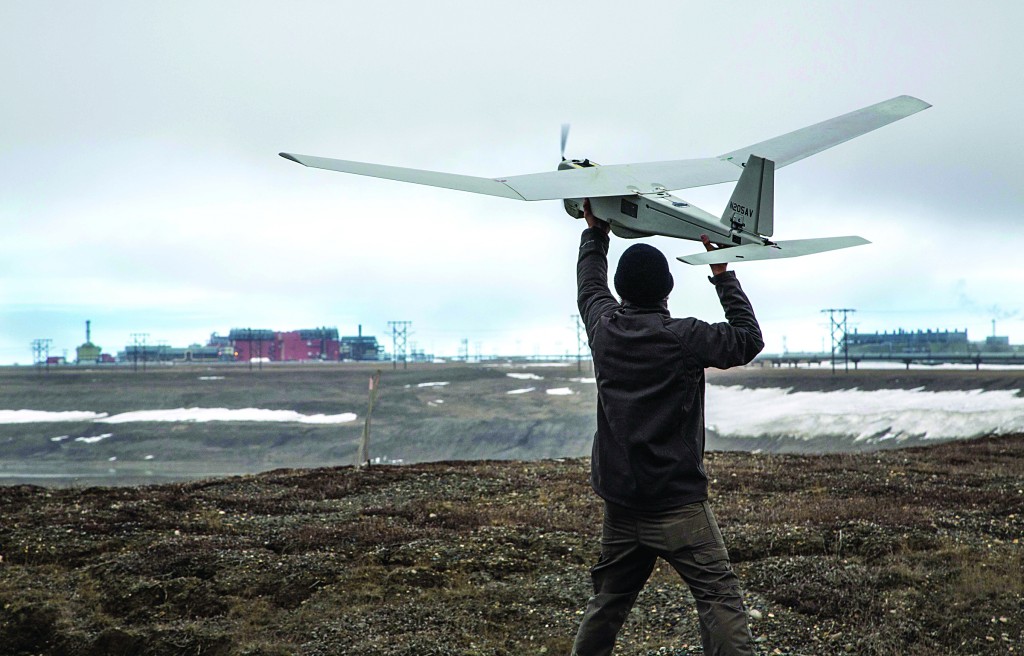 Marking a milestone for the industry, Monrovia, Calif., drone maker AeroVironment Inc. has announced a contract to use an unmanned aircraft to perform routine commercial services over land in compliance with Federal Aviation Administration regulations.

As the U.S. Navy moves toward developing its first fleet of aircraft carrier-based combat drones, a dogfight has broken out in Washington over the direction of the program.

“These surveys on Alaska’s North Slope are another important step toward broader commercial use of unmanned aircraft,” Transportation Secretary Anthony Foxx said in a statement. “The technology is quickly changing, and the opportunities are growing.”

Since Sunday, the drone has been flying above the largest oil field in North America using high-tech sensors to create 3-D computerized models of roads, pads and pipelines for industrial applications.

The five-year contract could be a sign of things to come as drone technology becomes more advanced and demand increases from police agencies and others for using drones in the commercial world.

Drones “have proven adept at safely and effectively performing aerial surveys, and can be an effective tool for the oil and gas industry,” she said. Hinton said her group believes that more needs to be done to allow for such operations, with limits.

The Puma, which takes off after being thrown into the air, was originally designed to give troops on the ground a bird’s-eye view of what’s happening over a ridge or around a bend.

In one mission for BP, the AeroVironment drone assisted drivers moving 3.5-million-pound drill rigs on tight roadways in low-visibility conditions by giving them high-resolution 3-D models of the road ahead.

“This is an important achievement for our joint team and for the industry in demonstrating the safe and effective use of our proven UAS technology for commercial applications,” AeroVironment Chief Executive Timothy E. Conver said in a statement.

AeroVironment is the Pentagon’s top supplier of small drones — including the Raven, Wasp and Puma models. But the company, which makes drones in its Simi Valley facilities, has seen sales decline as the wars in Iraq and Afghanistan come to a close.

Hoping for new revenue streams, AeroVironment has been waiting for the FAA to allow drones to fly for commercial purposes here at home.

Currently, drones are not allowed to fly in the U.S. except with special permission from the FAA. As demand increases from commercial industries, though, the agency has moved to ease restrictions.

Oil and gas companies such as BP want to utilize them to keep an eye on their pipelines. Moviemakers want to use drones to film action scenes. The idea of using robotic aircraft as transport vehicles has been discussed as a way to deliver books for Amazon.com and pizza for Domino’s.

The FAA is working to meet a congressional mandate to integrate U.S. airspace with robotic aircraft by September 2015.

However, the prospect of thousands of unmanned aircraft flying around U.S. airspace in populated areas beginning at that time appears unlikely. The FAA has said that remotely piloted aircraft aren’t allowed in national airspace on a wide scale because they don’t have an adequate “detect, sense and avoid” technology to prevent midair collisions.

Last summer, the FAA gave away two first-of-their-kind certificates that permitted operators to fly drones for commercial purposes. However, they were in remote areas over water.

The oil field at Prudhoe Bay is in the northernmost part of Alaska, near the Beaufort Sea. There, AeroVironment’s Puma, which has a wingspan of about 9 feet, flies at 200 to 400 feet above ground level for up to 3.5 hours at a time.

“This technology will help BP optimize the planning and implementation of maintenance programs for the North Slope infrastructure throughout Prudhoe Bay,” said Dawn Patience, a BP spokeswoman. “Targeting maintenance activities on specific road areas will save time, and address safety and reliability.”