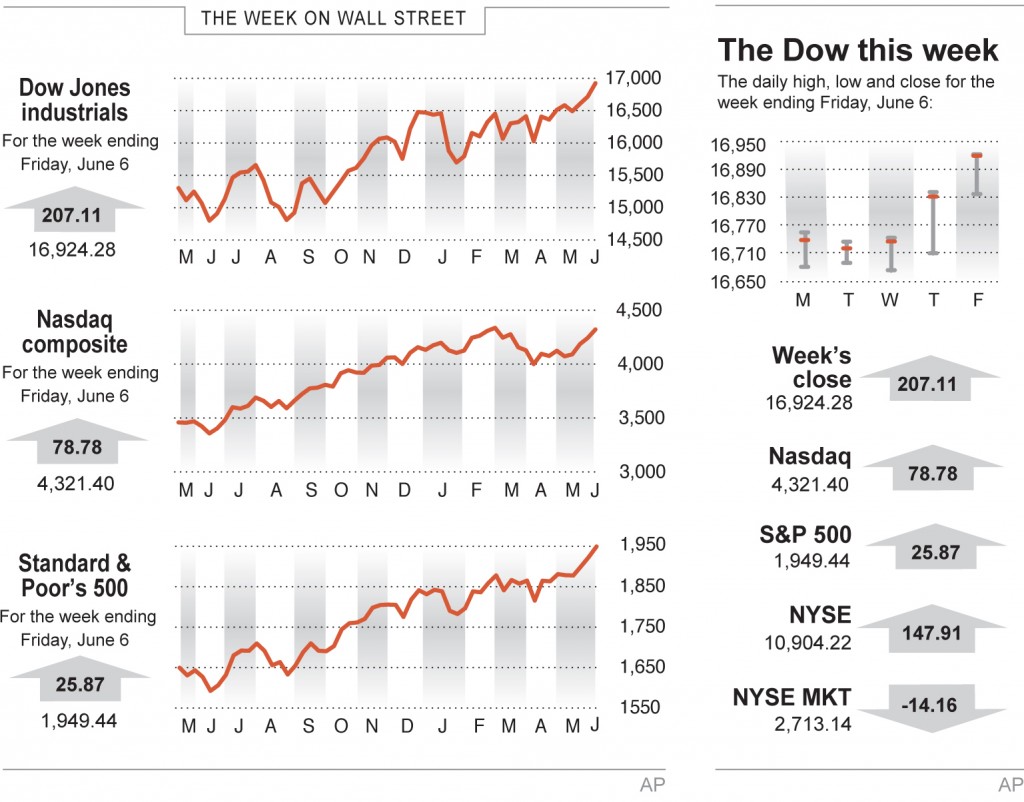 The Standard & Poor’s 500 index notched another record high, its eighth in the past 10 days. For the week, the index climbed 1.3 percent, the third straight in which it has posted solid gains.

Before the market opened, the Labor Department said employers added 217,000 jobs to their payrolls in May, in the range of what economists had expected. The unemployment rate stayed put at 6.3 percent. Wall Street forecasters had expected it to inch up.

“It’s another positive sign, along with retail sales, housing and everything else we’ve been seeing,” said JJ Kinahan, chief strategist at TD Ameritrade. “There’s nothing in this report to slow this market down, but all everyone has wanted to talk about is why the market is going to fall.”

Major indexes began a steady climb at the start of the day then spent the afternoon sitting tight. Industrial and energy companies, whose success often hinges on economic growth, led seven of the 10 sectors in the index higher. 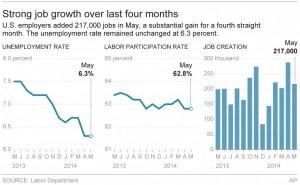 Investor began to feel more optimistic earlier in the week on signs that the U.S. economy had shaken off a rough winter and on big steps by the European Central Bank to revive the region’s economy.

Other reports revealed a rise in manufacturing growth in the world’s two largest economies, U.S. and China. A survey of the U.S. service industry, which employs roughly nine out of every 10 workers, showed an increase in new orders, production and hiring.

Even so, many investors question the stock market’s slow and steady rise. There hasn’t been a “correction,” Wall Street-speak for a drop of 10 percent or more, since August 2011. The market is starting to get expensive compared with the historical average. Investors are currently paying $17 for every $1 in earnings for companies in the S&P 500 index, up from the historical average around $15.

Robert Pavlik, chief market strategist at Banyan Partners, a wealth-management firm, said he wouldn’t be surprised to see the market drop in the summer months, especially if companies turn in dismal second-quarter results.

“The stock market isn’t all that expensive right now,” Pavlik said, “but I just don’t see the earnings growth. That’s why I think second-quarter earnings will be important.”

Arista Networks soared in its first day of trading on the New York Stock Exchange. Arista raised $225 million from investors in its initial public offering late Thursday, selling more than five million shares at a price of $43 each. The company makes networking equipment for cloud computing, and had reportedly delayed its IPO after tech stocks took a beating in April.

Gap rose 87 cents, or 2 percent, to $42.06. After the market closed Thursday, Gap reported higher sales in May thanks to gains in its Banana Republic and Old Navy brands. Sales at stores open at least a year rose 1 percent, much better than analysts’ forecasts.

One loser was Hertz, which slumped after the car-rental company said in a regulatory filing that it needs to correct its financial results for the past three years because of accounting errors. Hertz Global Holdings dropped $2.76, or 9 percent, to $27.73.

In overseas markets, Germany’s main stock index, the DAX, rose 0.4 percent to a record high. Both France’s CAC 40 and Britain’s FTSE 100 closed with gains of 0.7 percent

In the market for U.S. government bonds, the yield on the 10-year Treasury was unchanged from late Thursday at 2.59 percent. The price of oil rose 18 cents to $102.66 a barrel.