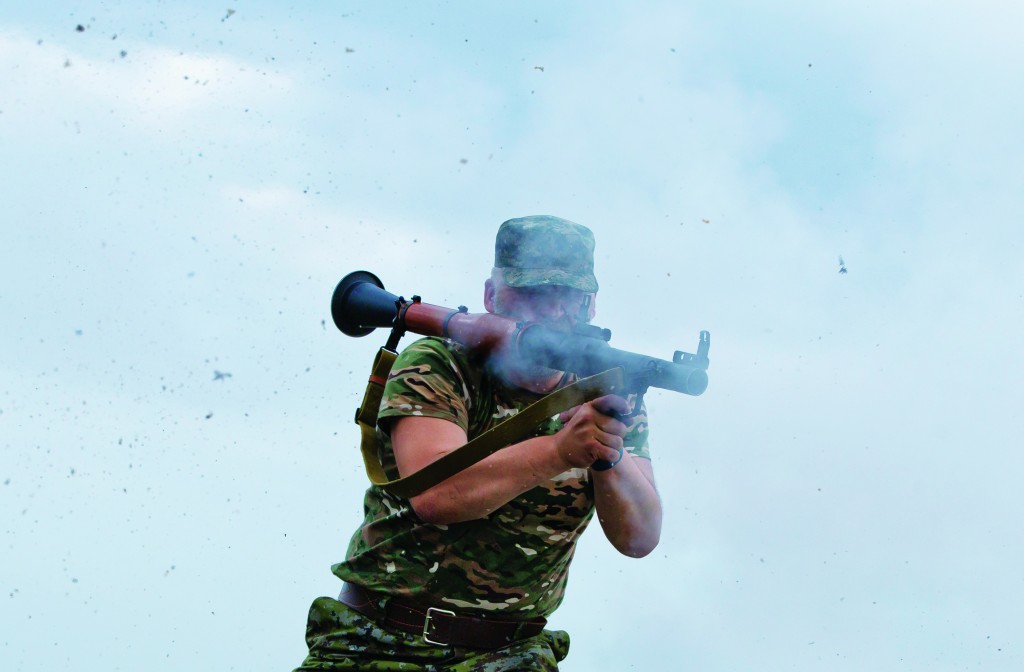 Hundreds of pro-Russia insurgents mounted a daylong assault on a border guard base in eastern Ukraine on Monday, with some firing rocket-propelled grenades from the roof of a nearby residential building and prompting the deployment of air support by government forces.

Some 10 kilometers (6 miles) away, a blast at an administrative building held by insurgents claimed more lives. A health official for the Luhansk region told Interfax news agency that at least seven people had been confirmed dead in the incident, which rebels described as a government airstrike.

Authorities denied carrying out a strike and said the blast was caused by misdirected rebel fire from a portable surface-to-air missile launcher.

Russia’s Foreign Ministry swiftly condemned what it described as a government attack on the rebel-held building and urged U.S. Assistant Secretary of Defense Derek Chollet, who was visiting Kiev on Monday, to help calm unrest in Ukraine.

“We urge our Western partners to use their influence on Kiev, to stop Ukraine from descending into a national catastrophe,” the ministry said in a statement.

On the edge of Luhansk, in the Mirny district, rebels in camouflage promised safety for troops at a border guard service base if they surrendered and laid down their arms. The pro-Russian insurgents, who have seized government and police buildings across eastern Ukraine, have waged increasingly aggressive attacks on government-held checkpoints and garrisons in an attempt to seize weapons and ammunition from Ukrainian forces.

For weeks, Russian-speaking eastern Ukraine has been the scene of deadly clashes between government troops and pro-Russian insurgents.

Many in Ukraine’s east are suspicious of the new pro-Western government in Kiev, which came to power when pro-Russian President Viktor Yanukovych fled the country in February after months of street protests in Kiev. Protests in the east demanding greater freedom from the Ukrainian capital soon turned into a separatist movement, as the Luhansk and Donetsk regions declared independence following hastily called referendums.

The conflict between Ukrainian government forces and pro-Russian insurgents escalated markedly in the past week, with rebels attempting to seize a major airport and the shooting-down of a Ukrainian military helicopter.

In Moscow, the Russian Defense Ministry announced Monday a military exercise involving the launch of high-precision missiles. The ministry said the maneuvers of the western military district will continue through Thursday and will involve the deployment of Iskander surface-to-surface missiles.

Moscow didn’t specify the areas where the exercise will be held and made no mention of the situation in Ukraine.