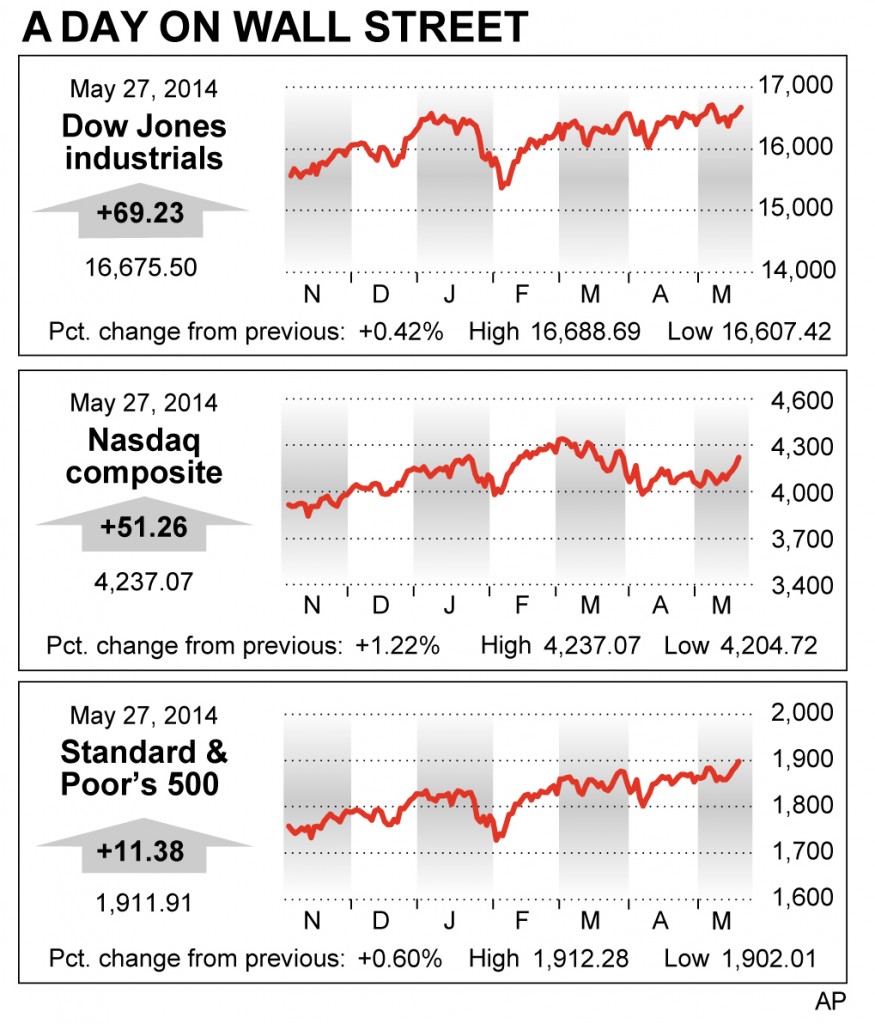 More promising signs that the economy is strengthening after its winter slowdown pushed stocks higher on Tuesday.

The Standard & Poor’s 500 index rose for the fourth straight day and ended at another all-time high. It closed above 1,900 for the first time on Friday. Small-company stocks and other riskier parts of the market, like Internet and biotechnology companies, also gained after being beaten down over the past few months.

The government reported that orders to U.S. factories for long-lasting manufactured goods rose unexpectedly in April, powered by a surge in demand for military aircraft. Also, the Conference Board’s consumer confidence index rose in May to the second-highest level since January 2008, just after the start of the Great Recession.

Stocks rose from the opening bell following the durable goods report. Nine of the ten sectors that make up the S&P 500 rose, led by financial and industrial companies.

Hillshire Brands, the maker of Jimmy Dean breakfast sausage and other products, was among the biggest gainers Tuesday. The stock jumped $8.17, or 22.1 percent, to $45.19 after poultry producer Pilgrim’s Pride offered to acquire the company in a deal worth about $5.6 billion. Pilgrim’s Pride said the deal is better than Hillshire’s plan, announced earlier this month, to buy Pinnacle Foods for $4.23 billion. Pinnacle’s stock fell $1.79, or 5.4 percent, to $31.48.

Despite the positive economic news, bond prices rose. Typically, bond prices fall and their yields rise when economic data improves as traders anticipate that interest rates will rise in the future.

The yield on the 10-year Treasury note fell to 2.51 percent from 2.53 percent on Friday. The yield on the note is trading close to its lowest in 10 months. It started the year at 3 percent.

The recent surge in bonds is one of the reasons behind the uptick in stocks, said Jeff Knight, head of global asset allocation at Columbia Management, an asset management company. Although stocks are no longer cheap on an absolute level after the S&P 500 surged almost 30 percent last year, they still look good value compared to bonds.

While the stock market has made modest gains this year, bonds have surged, contrary to the expectations of many analysts, who had forecast that bond prices would drop as the economy strengthened.

• Bank of America rose 50 cents, or 3.4 percent, to $15.22 after the lender said it’s resubmitting a review of its operations to the Federal Reserve a month after discovering errors in its initial report. That forced the bank to suspend a dividend increase and a plan to buy back more of its own shares.

• Staples fell 23 cents, or 2 percent, to $11.42 after Goldman Sachs cut its earnings outlook for the office supplies retailer. Analysts at the bank expect profit margins at Staples to fall due to its ongoing program of investment and diversification.