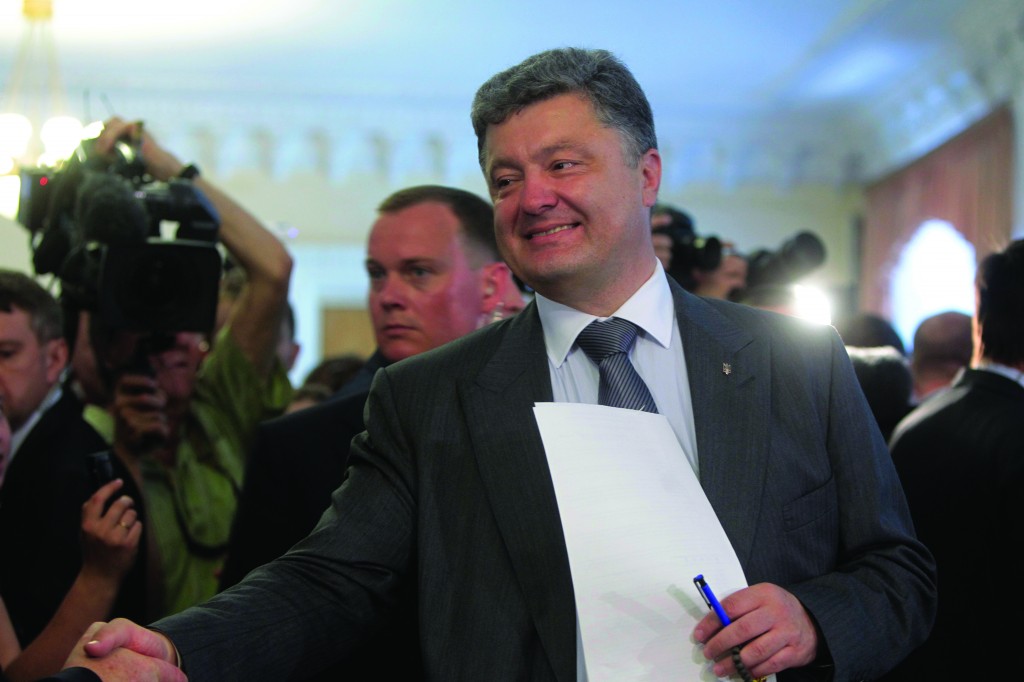 Billionaire Petro Poroshenko claimed Ukraine’s presidency on Sunday after exit polls gave him an absolute majority in a first round of voting and, vowing to end a conflict with pro-Russian rebels, he pledged to align his country with Europe.

Exit polls gave Poroshenko, a confectionery magnate with long experience in government, more than 55 percent of the vote, well ahead of former Prime Minister Yulia Tymoshenko in second place with just over 12 percent. If confirmed by results on Monday, there will be no need for a runoff vote on June 15.

Ukrainians, weary of six months of political turmoil, hope their new president will be able to pull their country of 45 million people back from the brink of bankruptcy, dismemberment and civil war that prevented voting in parts of the Russian-speaking east of the country.

“All the polls show that the election has been completed in one round and the country has a new president,” Poroshenko, 48, told a news conference. His businesses have earned him a fortune of over $1 billion and the nickname the “Chocolate King.”

At his campaign headquarters, he told supporters the majority of Ukrainians had given him a mandate to continue a course of integration with the rest of Europe but said his first priority was to travel to the east of the country to end “war and chaos” caused by armed pro-Russian separatists there.

He said he was ready to negotiate with opponents and offer amnesty to those who laid down weapons — but he ruled out any negotiation with killers and “terrorists.”

Pro-Russian separatists barred people from voting in much of Ukraine’s Donbass industrial heartland, turning the main city of Donetsk into a ghost town, after days of violence in the surrounding region in which at least 20 people were killed.

Asked by a foreign journalist about relations with Russia, Poroshenko, speaking in fluent English, said he would insist on respect for Ukraine’s “sovereignty and territorial integrity.” He also said Ukraine would never recognize Russia’s “occupation of Crimea,” the Black Sea region seized by Moscow in March.

But Poroshenko will have to try to find common ground with Ukraine’s giant northern neighbor, which provides most of its natural gas and is the major market for its exports. He was later quoted saying that he would “certainly” meet Putin since Russian involvement was essential to establishing stability.

Sunday’s election marked the culmination of a revolution that erupted last November, forced pro-Russian President Viktor Yanukovich to flee in February and spiraled into an existential crisis when Moscow responded by declaring its right to invade Ukraine to protect its large Russian-speaking population.

The pro-Moscow separatists have proclaimed independent “people’s republics” in the provinces of Donetsk and Luhansk and blocked voting there as that would imply they were still part of Ukraine. Nor was any vote held in Russian-annexed Crimea.

Ukrainian officials hailed a high voter turnout in much of the sprawling country but said only about 20 percent of polling stations in the two restive eastern regions had functioned. One man was reported killed in a shootout in the Luhansk region after what officials said was a militant raid on a polling station.

Putin, who branded eastern Ukraine “New Russia” last month, has made more accommodating noises of late, saying on Saturday he would respect the voters’ will. He has announced the pullback of tens of thousands of Russian troops massed on the border.

But the absence of more than 15 percent of the potential electorate from the election could give Moscow an excuse to raise doubts about the victor’s legitimacy and continue applying pressure on the new president in Kiev.

Poroshenko is hardly a new face in Ukrainian politics, having served in a cabinet under Yanukovich and also under a previous government led by Yanukovich’s foes. This breadth of experience has given him a reputation as a pragmatist capable of bridging Ukraine’s divide between supporters and foes of Moscow.