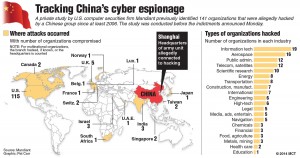 The Chinese targeted big-name American makers of nuclear and solar technology, stealing confidential business information, sensitive trade secrets and internal communications for competitive advantage, according to a grand jury indictment that the Justice Department said should be a national “wake-up call” about cyber intrusions.

A company’s success in the international marketplace should not be based “on a sponsor government’s ability to spy and steal business secrets,” Attorney General Eric Holder declared at a news conference.

The alleged targets were Alcoa World Alumina, Westinghouse Electric Co., Allegheny Technologies, U.S. Steel Corp., the United Steelworkers Union and SolarWorld. The indictment, which includes charges of trade-secret theft and economic espionage, was issued in Pittsburgh, where most of the companies are based.

China denied it all. In a statement, the Foreign Ministry said the charges were based on “fabricated facts” and would jeopardize China-U.S. “cooperation and mutual trust.”

“China is steadfast in upholding cybersecurity,” said the statement. “The Chinese government, the Chinese military and their relevant personnel have never engaged or participated in cybertheft of trade secrets. The U.S. accusation against Chinese personnel is purely ungrounded and absurd.”

The charges underscore a longtime Obama administration goal to prosecute state-sponsored cyberthreats, which U.S. officials say they have grappled with for years. One government report said more than 40 Pentagon weapons programs and nearly 30 other defense technologies have been compromised by cyber intrusions from China. The cybersecurity firm Mandiant issued a report last year alleging links between a secret Chinese military unit and years of cyberattacks against U.S. companies.

Monday’s prosecution was announced on the heels of a separate worldwide operation over the weekend that resulted in the arrests of 97 people in 16 countries who are suspected of developing, distributing or using malicious software called BlackShades.

The new indictment attempts to distinguish spying for national security purposes — which the U.S. admits doing — from economic espionage intended to gain commercial advantage for private companies or industries, which the U.S. denies it does. Classified documents disclosed by former National Security Agency analyst Edward Snowden have described aggressive U.S. efforts to eavesdrop on foreign communications that would be illegal in those countries.

Unlike in some countries, there are no nationalized U.S. industries. American officials have flatly denied that the government spies on foreign companies and then hands over commercially valuable information to U.S. companies. In China, though, many companies are state owned, particularly those that supply the military.

The indictment says that hackers, officers with the China’s People’s Liberation Army, stole proprietary information from the companies and the labor union, including design specification for Westinghouse pipes and pricing and strategy information from SolarWorld. Working from a building in Shanghai, prosecutors say, the hackers in some cases gained access to computer networks by sending emails to company employees that looked authentic but that actually contained a link to malicious code.

The defendants are all believed to be in China and it was unclear whether any might ever be turned over to the U.S. for prosecution. But the Justice Department, publicizing the charges, identified all five by name and issued “wanted” posters.

“For the first time, we are exposing the faces and names behind the keyboards in Shanghai used to steal from American businesses,” said John Carlin, the head of the Justice Department’s National Security Division.

The new indictment will put a greater strain on the U.S.-China relationship and could provoke retaliatory acts in China or elsewhere.

This article appeared in print on page 1 of the May 20th, 2014 edition of Hamodia.