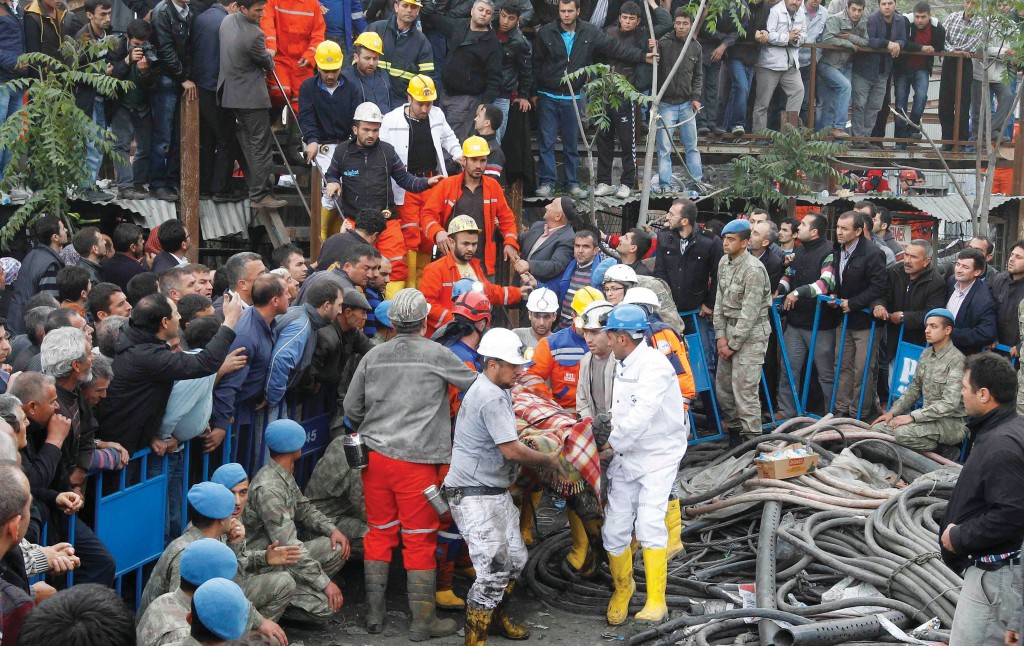 Loudspeakers broadcast the names of the dead as rows of graves were filled in this close-knit Turkish mining town on Thursday.

Rescue teams recovered another nine victims, raising the death toll to 283, with scores of people still unaccounted for, according to government figures. The disaster Tuesday has set off protests around Turkey and thrown Prime Minister Recep Tayyip Erdogan’s presidential ambitions off stride. Blackening his reputation further, one of Erdogan’s aides was seen kicking a protester held on the ground by armed police.

No miner has been brought out alive since dawn Wednesday from the Soma coal mine where the explosion and fire took place. Mourners said they spent their whole lives fearing something like this.

Energy Minister Taner Yildiz said the search for survivors has been hampered by a mine fire that had spread to a conveyor system — engulfing a 200 meter-long (650-foot) stretch — but progress was made Thursday on extinguishing it. Rescue operations have been suspended several times as burning coal inside created toxic fumes and too-risky conditions for the rescue teams.

Emergency crews detected a drop in carbon monoxide levels “which means that the fire has gotten smaller,” he said.

Erdogan, who is expected to soon announce his candidacy for Turkey’s presidential election in August, was not welcome during his visit Wednesday. He was forced to take refuge at a supermarket after angry crowds called him a murderer and a thief, in a reference to alleged corruption, and clashed with police.

Turkish newspapers printed photographs Thursday of an Erdogan aide kicking a protester who was being held on the ground by special forces police. The aide, Yusuf Yerkel, issued a statement Thursday that expressed regret but also claimed he was provoked.

“I am sorry that I was not able to keep calm despite all the provocations, insults and attacks that I was subjected to,” he said.

Erdogan had appeared somewhat tone-deaf to residents’ grief Wednesday, calling mining accidents “ordinary things” that occur in many other countries.

In contrast, Turkish President Abdullah Gul, visiting Soma on Thursday, described the coal mine explosion as “a huge disaster.”

Turkey’s largest trade union confederation, representing some 800,000 workers, joined a one-day strike Thursday by other unions to demand better conditions for workers. Miners in Zonguldak gathering in front of a pit Thursday but did not enter it. In Istanbul, a group chanted anti-government slogans and carried a large banner that read: “It’s not an accident, it’s murder.”

The government has said 787 people were inside the coal mine at the time of Tuesday’s explosion, and that 383 were rescued, many with injuries. Tuesday’s explosion tore through the mine as workers were preparing for a shift change, which likely raised the casualty toll.

The death toll made it Turkey’s worst mining accident, topping a 1992 gas explosion that killed 263 workers near the Black Sea port of Zonguldak.