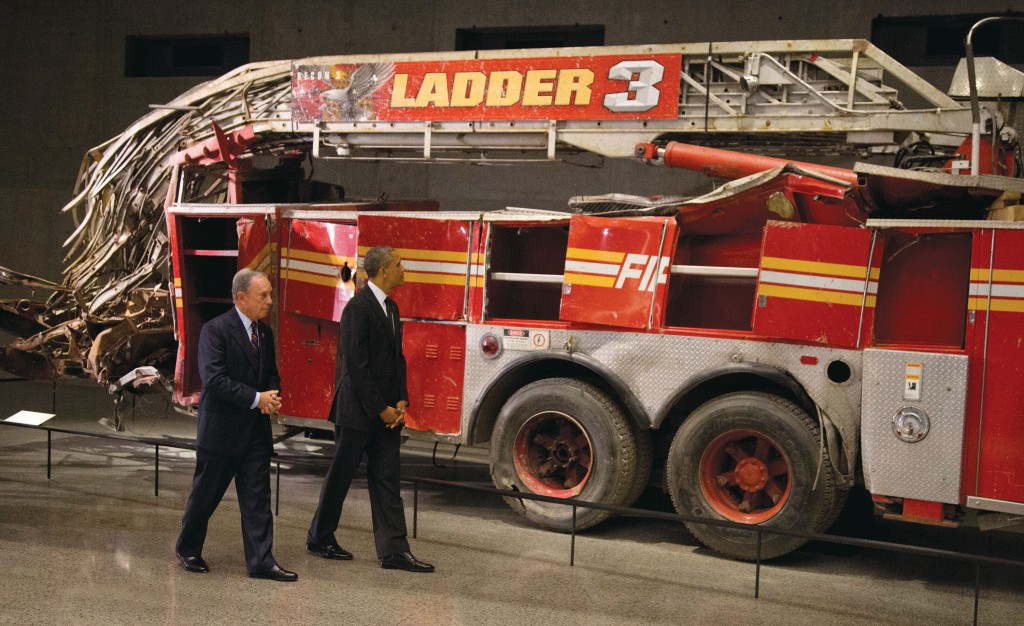 President Barack Obama praised the new Sept. 11 museum on Thursday as “a sacred place of healing and of hope” that captures both the story and the spirit of heroism and helpfulness that followed the attacks.

“It’s an honor to join in your memories, to recall and to reflect, but above all to reaffirm the true spirit of 9/11 — love, compassion, sacrifice — and to enshrine it forever in the heart of our nation,” he told an audience of victims’ relatives, survivors, rescuers and recovery workers at the ground zero museum’s dedication ceremony.

“Like the great wall and bedrock that embrace us today, nothing can ever break us. Nothing can change who we are as Americans.”

After viewing some of the exhibits, including a mangled fire truck and a memorial wall with photos of victims, the president touched on some of the many stories of courage amid the chaos: the passengers who stormed a hijacked plane’s cockpit over a Pennsylvania field and first responders who rushed into the burning twin towers. He also honored military members “who have served with honor in more than a decade of war.”

He focused especially on the story of Welles Crowther, a 24-year-old volunteer firefighter who became known as “the man in the red bandanna” after he led other workers to safety from the trade center’s stricken south tower. He died in the tower’s collapse.

One of the red bandannas he made a habit of carrying is in the museum, and Crowther’s mother, Alison, told the audience she hoped it would remind visitors “how people helped each other that day, and that they will be inspired to do the same in ways both big and small. This is the true legacy of Sept. 11.”

By her side was Ling Young, one of the people Crowther saved.

“It was very hard for me to come here today,” but she wanted to thank his parents, she said.

The museum, which commemorates the 2001 terrorist attack, as well as the 1993 World Trade Center bombing, opens to the public on May 21.

By turns chilling and heartbreaking, the ground zero museum leads people on an unsettling journey through the terrorist attacks, with forays into their lead up and legacy.

There are scenes of horror, including videos of the towers collapsing and people falling from them. But there also are symbols of heroism, ranging from damaged fire trucks to the wristwatch of one of the airline passengers who confronted the hijackers.